As a follow up to the wildly popular “Hubbert Peak Theory of Rock” article on the decline of rock music (and U.S. oil production), I decided to take the logical next step in pop culture quantitative analysis: Greatest Movies Lists. Only this time, no spurious correlations–just straight up number crunching based on these lists.

UPDATE: I can haz arithmetix? There were some errors in the math in the original draft of this post. Details below. 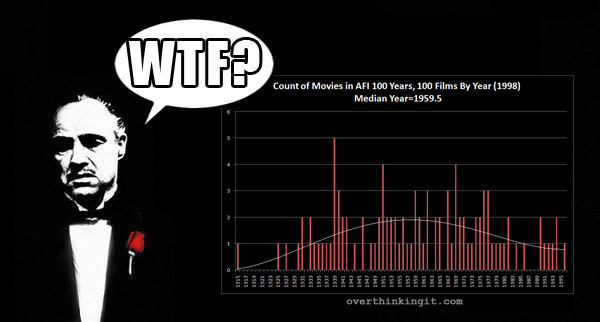 Did movie quality peak in the ‘60s and ‘70s? Has it all been downhill since The Godfather in 1972? Some statistics you can’t refuse, after the jump.

One of the main criticisms leveled at the “Peak Rock” theory was the very nature of the Rolling Stone 500 list.  Clearly, the RS 500 skews far towards older songs.  It has only a small handful of hip-hop, a genre that came to maturity much later than pop/rock.  In short, too many great songs from the 80’s and 90’s were overlooked by the hopelessly retro-focused folks surveyed by RS.

But what about movie critics? Are they, too, hopelessly stuck in some bygone “golden age” of cinema and disregard everything since then as inferior and derivative?

Let’s take a look at the American Film Institute’s “AFI 100 Years, 100 Films” list of the 100 greatest movies of all time, as determined by a 1998 survey of industry professionals: 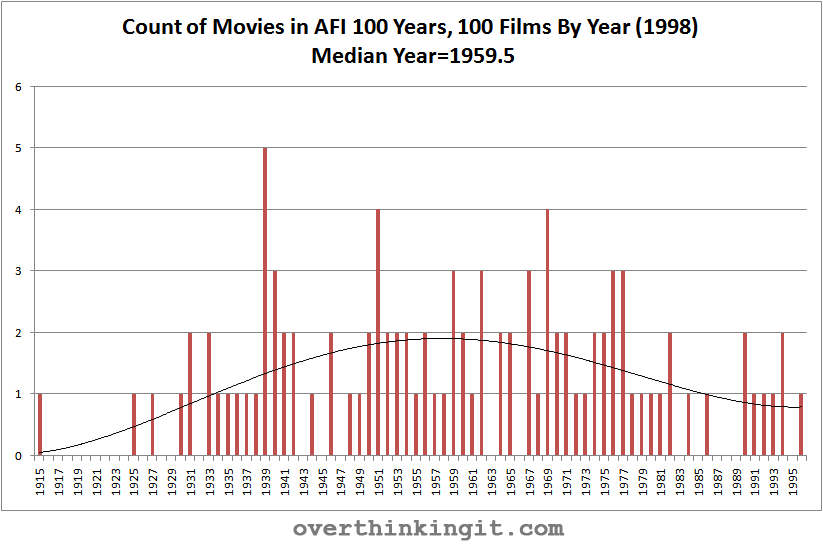 Notice that the single year with the greatest number of movies in the AFI 100 list is 1939 and that the trend line shows a bell curve that peaks roughly in the middle but tails off towards the end.  The median year of the distribution is 1959.5, which is 39 years prior to the release of this list in 1998.

Oh noes! Is his proof that we’re running out of good movies? Not so fast.  Fortunately for us, AFI updated its list 9 years later, in 2007, and here are the new results: 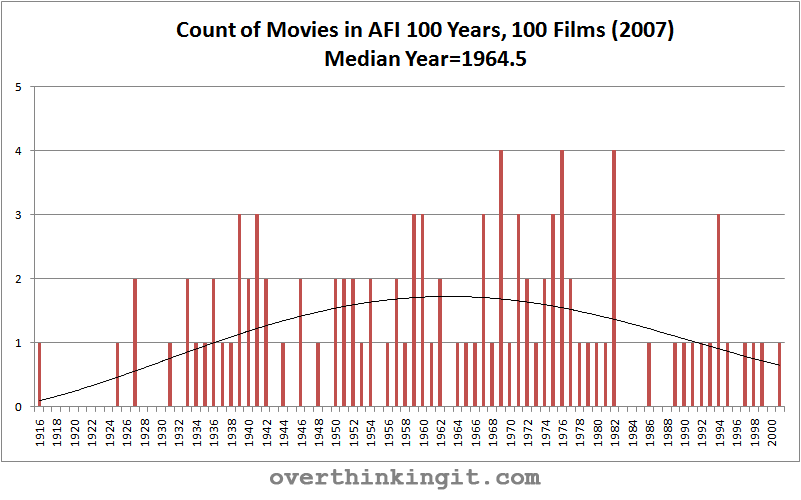 Nothing shockingly different, right?  But notice that after 9 years, the median year (1964.5) for top movies has increased by, you guessed it, 9 years.  Clearly, the outcome of the new rankings reflect an accommodation of modern tastes.  New classics were crowned (Titanic, Lord of the Rings), while old ones fell off the list (The Jazz Singer, Frankenstein…wow).

The fact that the distribution’s median kept pace with the 9 years between the lists is an indicator that, in spite of all the insipid comedies and formulaic blockbusters that seem to have dominated the modern cinema since Jaws and Star Wars, studios still manage to produce a few truly great films at a respectable rate. Eight or nine years from now, hopefully AFI will do another update to their list, and I wouldn’t be surprised to see that median year move up eight or nine years as well.

So that’s what the critics and movie professionals have to say. But when you ask the movie-going, internet-surfing public what they think, you get a very different picture.  Let’s take a look at that most democratic of movie ranking systems, the IMDB Top 250, as determined by users ranking individual films on a 1-10 star basis: 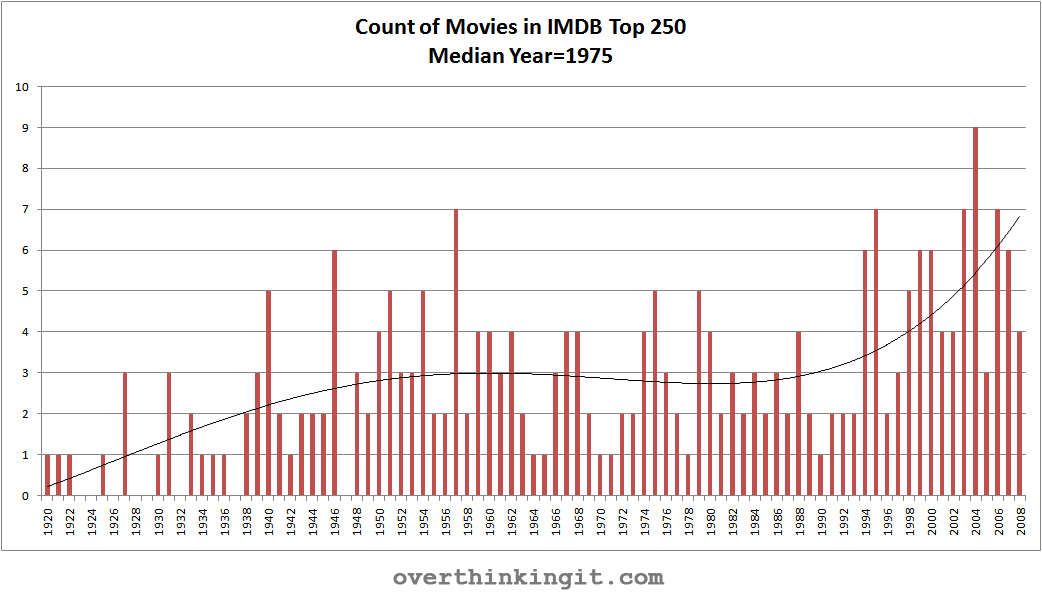 That’s no bell curve.  The trend definitely shoots upward starting around 1990 and continues through the current decade.  How could this be?  Isn’t this the era of Not Another Teen Movie and Pearl Harbor? Isn’t this the time when Jerry Bruckheimer and Michael Bay unleashed their celluloid crap onto the masses?  Why, yes it is, but it’s also the time of the fanboy, that over-exuberant, internet-savvy, slavishly devoted fan who comes home from the midnight screening and *ZAP!* fires away a 10 star salute to the work of incredible genius that he just saw. Why else would The Dark Night be the Number Four Greatest Movie of All Time according to this?  For a few weeks after its initial release, it was even ranked Number One, over longtime favorites The Shawshank Redemption and The Godfather. Some other recent entries on the list that are of questionable “all-time-greatness” include The Bourne Ultimatum, The Prestige, Sin City, V  for Vendetta, Shaun of the Dead, and Pirates of the Caribbean. Don’t get me wrong. These are all fine films, but they’re also the types that get fanboy-inflated ratings.

All of this brings us to two fundamental question. First, what’s the difference between movies and rock/pop music that seems to allow for continued output of “great” movies, while rock/pop music produces fewer and fewer “greats” in the post-golden-years?

To be fair, people do complain about the decline of both the movie and music industries.  Both are derided for churning out predictable, derivative fare. However, I think there is a widely held belief that Hollywood can still make a great film of staggering genius, but the music industry will never produce anything approaching the originality and greatness of the musical greats from the ’60s and ’70s. To explain this perceived difference, I would point to  some fundamental differences between movies and music. First, although the barriers to both movie and music making have been dramatically lowered, it’s still relatively harder to churn out a truly professional movie versus a well-polished album and get it out there. Distribution of feature films is still limited by the number of big screens out there, which can’t multiply as fast as the number of iPods and iTunes downloads.  Consequently, the music market is more saturated than the feature film market.  With less competition to choose from, it’s easier to pick out and identify “the greats” from the dozens of major feature releases each year versus the thousands upon thousands of albums that make their way onto the market.

Second, on the artistic side, I still hold to the theory that I proposed in “Peak Rock” that rock/pop is an inherently limited form.  There’s only so much you can do with the guitar/bass/drums rhythm section and the confines of Western popular music. The motion picture, on the other hand, is virtually limitless. The two hour feature film gives incredible leeway in storytelling, both in the crafting of the story itself as well as in the visual and aural representation of that story. Movies have visual effects, dialogue, physical action, silence, sound effects, musical scores, and countless other variables.  Rock/pop music has just the music, an inherently limited form at that.

The second, and more existential, fundamental question: is all of this list-making a pointless exercise? With something so subjective as quality of cultural creations, who really has the authority to make lists of greatest songs or movies of all time? Rolling Stone? AFI? The Public? None of the above?

My first instinct is, yes, it’s pretty pointless.  I don’t think there’s a whole lot to be gained by arguing why Frankenstein deserves a spot on the AFI Top 100 list versus Titanic, or why Green Day got left off the Rolling Stone 500 list while Dave Matthews Band made the cut. But everyone has the right to their own personal favorites. I keep a running list of my top five or so movies, concerts, albums, etc. And at their core, these lists are just a bunch of peoples’ personal favorite lists, just aggregated and compiled by an entity that thinks it has enough credibility to speak on the Greatness of Culture authoritatively.  The IMDB list is a little different in that it uses compiled rankings on a movie by movie basis, and that it’s open to the general public as opposed to industry insiders, but it still is a distillation of a large number of individuals’ subjective pop culture tastes.

In conclusion, I don’t think we’re in some sort of crisis of quality pop culture production. Rock/pop music may continue to be deritative of previous works, but that won’t take away from my enjoyment of the next Killers/Ben Folds/Fountains of Wayne album. And they still give out Oscars every year, right? As for these lists, if you don’t like what you see on them, make your own pop culture. Or support those who are putting their creativity on the line and making their own pop culture. Or at least post some comments here and overthink this with me.

UPDATE 2008-10-27: Turns out that anyone with simple math skills would have noticed that I incorrectly calculated the difference in median years between the AFI 1998 and 2007 lists. 1964.5 – 1959.5 = 5, not 9, and that does do damage to my argument that movie tastes had kept up with the advancing years. In fact, it seems like they hadn’t, at least by AFI’s standards. Nonetheless, I would argue that the median advancing by anything at all is a good sign that the march of progress is continuing, at least a little bit, in the movie world. Also, I doubt subsequent Rolling Stone 500 song list would shift that much in almost a decade’s time due to the undue influence of the Motown hit machine on the list. Motown was truly a unique phenomenon, and I can’t think of any analogous movie hit machine that would skew critics so heavily towards one time period when making these kinds of lists.

27 Comments on “The Blockbuster Bell Curve: Are we running out of good movies, too?”