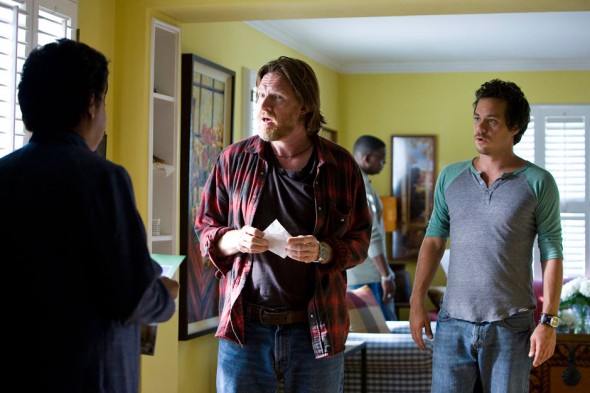 Upon first watching the new FX show Terriers, one’s reaction is almost guaranteed to be “Hey, it’s The Big Lebowski, the series!”  And it is.  We have a sad-sack private detective with shaggy hair, shambling around southern California solving crimes, and some classic rock on the soundtrack, and…

Huh.  That’s kind of all.  Well, the villains are a bunch of dissolute rich people, but Lebowski never had any kind of monopoly on that hoary device.

Nevertheless, something about the show feels like Lebowski.  And though the similarities aren’t right out there on the surface, they’re there if you dig.  Mostly in the main characters.

Although Hank Dolworth (the lead character, played by Donal Logue), looks like the Dude, he doesn’t act much like him.  He’s a recovering alcoholic, for instance.  And while the Dude pretty much abides, Dolworth seems to have some fairly serious anger issues.  They’re well disguised for the most part, but this is not a guy who’s basically happy with his life, and it shows.  In this, he’s more like Walter Sobchak, although Walter’s anger issues were never particularly well disguised.  He’s also like Walter in that he used to be more firmly on the side of law and order (ex-police in this case, rather than ex-military), and in that he has a seriously fraught relationship with his ex-wife.  (Like Walter’s wife, Dolworth’s wife Gretchen, played by Kimberly Quinn, has moved on with her life — or at least that’s how it looks at the series’ start.  I’m betting the demands of serial drama will have her warming back up to her ex at some point.)  The Dude’s laid-back attitude is represented on Terriers by Dolworth’s partner-cum-sidekick Britt Pollack, played by Michael Raymond-James.  So although the roles are switched around a little bit, Pollack and Dolworth’s conversations feel like the conversations between Walter and The Dude.  And that’s probably where most of that Lebowski feeling is coming from.

In most other ways, though, the show is decidedly un-Lebowskian, and although I’m as fond of The Big Lebowski as the next guy, these other aspects are what I think make Terriers so promising.  For one thing, the plot really hums along.  One of the show’s creators wrote Ocean’s 11, and it shows:  although the pilot was mostly dedicated to showing Pollack and Dolworth bumming around San Diego, there were no wasted scenes.  Every event connected to every other event.  And this is vanishingly rare on TV.  It’s not that most TV shows are sloppily plotted, exactly:  they’re plotted exactly the way that they should be, given the way that people watch TV (i.e. channel surfing, checking email, what have you).  With crime shows, this means a lot less “putting the clues together,” and a lot more “one random thing gives the whole game away, and then, like, five different people talk about it, so whenever you make it back from the kitchen with your sandwich you still won’t be confused.”  The Terriers approach is a breath of fresh air… but it’s also slightly frustrating to watch if you do want to check your email or whatever, because you really can’t afford to.  Not because you’ll miss the one important scene, but because all of the scenes are important on the small scale.

The Big Lebowski‘s plot, on the other hand, can probably best be described as shambolic:  it is in some respects an anti-plot.  And as a result – hedging into spoiler territory here, although for a pretty old movie – The Dude is in some respects an anti-detective.  I’ve always felt that the key scene in Lebowski is not one of the showy or hilarious ones, but the one where The Dude has a conversation with his “brother Shamus,” an actual private detective who has somehow gotten the impression that The Dude is the coolest, most skilled, most badass gumshoe this side of Humphrey Bogart.  At various times in the movie, we (the audience) are put in the position of the Shamus, in that we too think “Hey, maybe The Dude is an awesome cool noir hero!”   And then the Coens pull the rug out from under us (typically because of something Walter did), by demonstrating just how fundamentally non-awesome The Dude is.  On Terriers on the other hand… well, Dolworth is not exactly awesome as such, but he knows his detective work.  It’s the one thing he really can do well… which makes him a much more conventional character, I suppose, but that’s beside the point.  The point is that, at least so far, Terriers feels more than anything like a version of The Big Lebowski that does buy into the importance of the whole private investigator archetype that the original movie worked so hard to erode.  This arguably misses the point of The Big Lebowski by the widest of all possible margins… but it still makes for good television.  Set your Tevos.

Or read more from… TV, Terriers, The Big Lebowski