[It should be noted first of all that this post contains substantial Pillars of the Earth spoilers.  Second, as it’s a post about a Ken Follett novel, it gets a little bawdy.] 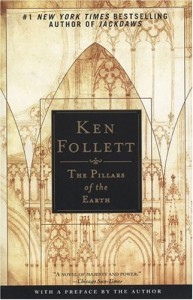 Heh, look at that font. All literary and elegant. Don't be confused, though: the book still has, like, tons of dirty bits.

Sometime in the late 80s, a successful spy novelist named Ken Follett got tired of thrillers and decided to try his hand at historical novels.  This understandably made his publishers a little nervous.  Follett’s stock in trade was the potboiler, the beach read.   It was by no means clear that his audience, who had eagerly lapped up the cocktail of sex, violence and Nazis that Follett had perfected in The Eye of the Needle and The Key to Rebecca, would be as interested in a thousand-odd page love letter to medieval cathedral-building.  But the gamble paid off.  The Pillars of the Earth turned out to be Follett’s most critically and commercially successful book.   So successful was the book that it’s easy to overlook just how peculiar it is.*  There’s a reason why the book is borderline respectable:  Follett explores medieval culture and society with a level of detail that rubs up on the border between the novelistic and the encyclopediac.  (I don’t know if the detail is accurate, necessarily, but it feels accurate, which for historical fiction is really all that matters.)  But there’s also a reason why it’s only borderline respectable:  Follett fans who turned in for the hair-breadth escapes, vivid fight scenes, and well-nigh-pornographic sex scenes that marked his earlier works would not be disappointed.  In fact these elements are if anything ramped up, as if Follett understood on some level that a fifty page in-depth exploration of the medieval textile industry would need to be washed down with a spoonful of vigorous humping.

But that’s the nice thing about novels.  They’re spacious:  there’s more than enough room for the history lessons and the coed naked knife fights.  As a result, Pillars of the Earth earns its page count.  It needs its page count.  Cut out the history, and it collapses into a pile of letters from penthouse.  Cut out the raunch and it becomes a rather substandard history textbook without footnotes.  Keep them both, and it stands as a nearly perfect exemplar of its particular kind.** 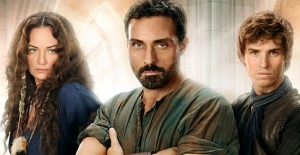 More like Pillars of the Backlighting! Am I right? Amirite?

It’s something of a commonplace these days that we are currently enjoying a golden age of television, and most of the shows people bring up are serialized dramas on premium cable channels.  The Sopranos, The Wire, Treme, and their ilk are often held up as the moving-image equivalent of the novel, offering psychological and social nuance that cannot be achieved in a mere two-hour movie.   As a result, an eight-hour miniseries adaptation of Pillars of the Earth would seem to be something to cheer about.  Would seem to be.

Overthinking It is not a review site, so let me get this over with quickly. The show is fine, but it’s not particularly good, which means either that I’m overestimating the quality of the source material or they really blew an opportunity here.  By relishing in the detailed exploration of various slices of 12th century society (and toning down the sex and violence, or at least leaving it alone), they could have turned Pillers of the Earth into something like a medieval version of The Wire.  Instead, they actually decided to ramp up the sleaze, throwing in an incest subplot that I don’t remember from the book, and cut out a great deal of the subtlety.  Take the character of Ellen.  She is accused of witchcraft early in the book, but no one, even her mortal enemy Waleran Bigod, takes it seriously.  The ecclesiastical court, lead by the virtuous Prior Philip, summarily informs everyone that she is obviously not a witch, but that she has committed fornication and as punishment must stay away from her common-law husband Tom for a full year, after which they have to get married for realz.  As punishments from medieval courts go, this lacks something in the Iron Maiden department, which is why coming across it in the book feels so refreshing.  Ellen’s reaction is also interesting.  Tom breaks the news to her at dinner.

“We have to live apart for a year, and you have to remain chaste—”

“Piss on that!” Ellen shouted. Now everyone was looking. “Piss on you, Tom Builder!” she said. She realized she had an audience.

“Piss on all of you, too,” she said. Most people grinned. It was hard to take offense, perhaps because she looked so lovely with her face flushed red and her golden eyes wide. She stood up. “Piss on Kingsbridge Priory!” She jumped up on to the table, and there was a burst of applause. She walked along the board. The diners snatched their bowls of soup and mugs of ale out of her way and sat back, laughing. “Piss on the prior!” she said. “Piss on the sub-prior, and the sacrist, and the cantor and the treasurer, and all their deeds and charters, and their chests full of silver pennies!” She reached the end of the table. Beyond it was another, smaller table where someone would sit and read aloud during the monks’ dinner. There was an open book on the table. Ellen jumped from the dining table to the reading table.

Suddenly Tom knew what she was going to do. “Ellen!” he called. “Don’t, please—”

“Piss on the Rule of Saint Benedict!” she yelled at the top of her voice. Then she hitched up her skirt, bent her knees, and urinated on the open book. The men roared with laughter, banged on the tables, hooted and whistled and cheered. Tom was not sure whether they shared Ellen’s contempt for the Rule or they just enjoyed seeing a beautiful woman expose herself. There was something erotic about her shameless vulgarity, but it was also exciting to see someone openly abuse the book that the monks were so tediously solemn about. Whatever the reason, they loved it.

The Starz version takes Follett’s scatology to new and obnoxious levels; meanwhile, as far as sociological depth goes, it is not far removed from Robin Hood: Prince of Thieves. Also, it makes Ellen less interesting as a character.  While the urination feels unnecessary in both scenes, the book version has the virtue of being a recognizable human impulse carried well past the limits of our suspension of disbelief (i.e. the pee feels gratuitous, but the tantrum feels real). It shows us Ellen as a woman with some self control issues.  The TV version gives us a caricature of bravery and righteous indignation.  To put it another way:  the urination always seems stupid, but in the book we’re supposed to think it’s stupid, while in the show it’s supposed to be badass.  If you already subscribe to Starz, you probably should watch Pillars of the Earth at least once.  It is – to damn with faint praise – just about worth the time it takes to watch it.  The acting is good, if nothing else, and you might get to see Donald Sutherland wielding a claymore.  But the idea that anyone would subscribe to Starz specifically for the purpose of watching this is absurd.

10 Comments on “Why Pillars of the Earth should have been a medieval The Wire, and wasn’t.”