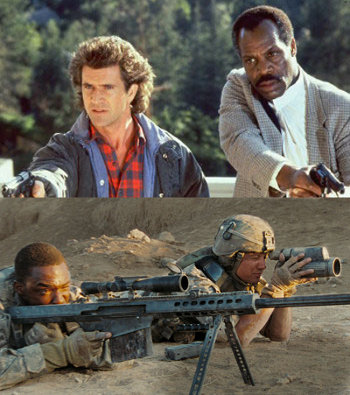 Mild spoilers for The Hurt Locker will follow. Although if you haven’t seen it and aren’t planning on seeing it tomorrow, I’m not going to give away anything that will ruin it, and I might help you understand what all the fuss is about.

Is this familiar to anybody?

Sergeant [JT Sanborn] is an [aspiring] family man and sensible veteran [soldier] just trying to make it through the day unscathed. [Staff] Sergeant [William James] is a suicidal loose cannon [bomb defusing specialist] who doesn’t care if he even lives to see the end of the day. Reluctantly thrown together to solve the mysterious [bombing of a street in Iraq], the unlikely duo [encounters] a dangerous ring of [Iraqi insurgents] employing ex-military mercenaries. After a tragic turn of events, the mission becomes personal and the mismatched investigators must learn to trust one another as they wage a two-man war against [ennui, meaningless death and the inhumanity of neocolonial geopolitics].

Oh, I know where I saw this! It was drawn from an IMDB Plot Summary:

Sergeant Roger Murtaugh is an aging family man and sensible veteran police officer just trying to make it through the day unscathed. Sergeant Martin Riggs is a suicidal loose cannon cop who doesn’t care if he even lives to see the end of the day. Reluctantly thrown together to solve the mysterious murder of a banker’s daughter, the unlikely duo uncovers a dangerous ring of drug smugglers employing ex-military mercenaries. After a tragic turn of events, the mission becomes personal and the mismatched investigators must learn to trust one another as they wage a two-man war against a deadly criminal organization.

Look familiar? Unless you’re one of OTI’s valued younger readership, it should. It’s from 1987’s Lethal Weapon, perhaps the definitive “buddy cop” movie of the last forty years, made back when Mel Gibson was the sexiest man alive.

Yeah, the world has turned upside down several times since then. I hear there’s an iPhone app that can measure the rotational velocity. But one thing has held constant – the buddy cop movie is still close to all our hearts. Oh, except now they give it Academy Awards (or maybe they will – check out the Oscars next weekend).

How far does the similarity between The Hurt Locker and Lethal Weapon go? (Farther than you think) What are the differences? And what does this say about how we’ve changed as people since the salad days of Riggs and Murtaugh? Read on…

Let’s start by watching the trailers – partly because they are awesome:

(In case you couldn’t figure it out or YouTube broke the links, the first one, the one with the awesome 80s special effects, isn’t the one up for an Academy Award next weekend.) 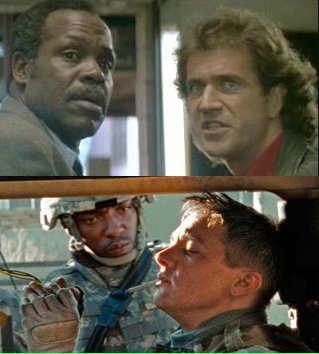 "If you weren't so good at your job, I wouldn't work with you, because you are crazy and dangerous and are going to get me killed."

But let’s run it down, shall we? White guy and black guy don’t get along. One is by the book, the other doesn’t follow any rules, but is just so … damn … good … that it doesn’t matter. The crazy guy kind of has a death wish and feels bad about his failure to take care of his family, while the by-the-book guy manages to more successfully compartmentalize his life, despite how disruptive the crazy guy is. Some kid or girl or something is threatened, which tests the buddy cops’ relationship and gives them something to agree on. There is a thoroughly implausible action sequence about once every ten pages.

Key lines to watch for:

(To my knowledge, Jeremy Renner in The Hurt Locker is the only man every nominated for a Best Actor Oscar in a movie where he actually says “I’m too old for this shit.” It’s in the scene where he’s sitting on the bed smoking. I didn’t believe it either.)

Other key tropes to watch for:

It is much to The Hurt Locker’s credit that, until you have that epiphany moment, all these similarities seem invisible. It successfully makes all these cliches that are so common in action movies seem at home in a “serious,” legitimate movie about a recent historical event. 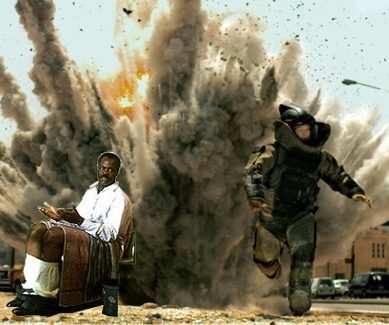 The explosions in particular bring this out – action movies have a hugely improbable frequency of explosions. The Hurt Locker is chock full of bombs and explosions. But The Hurt Locker is serious. It’s like watching one of those Learning Channel shows about human evolution and claiming you’re not doing to to be titillated by the scientific photographs of breasts. Except, you know, anybody buys it for a second and they don’t make fun of it on Office Space.

It reminds me a lot of Slumdog Millionaire, which is just a hop, skip and a jump from being a Li’l Rascals movie. There are a bazillion different disposable examples of the genre (band of outcast kids that includes a love triangle have mischievous adventures and grow up together), but which earned major legitimacy across the board and, dare I say it, duped its audience into thinking it was something they had not seen before while at the same time courting them with familiarity.

How do they both do it? The setting. They set their genre films and in places or circumstance that are difficult to portray on film because of cultural norms and precedent. They approach a difficult subject – extreme poverty in India or the American occupation in Iraq, and then they act out a movie in front of that cultural matte painting that is comfortable enough to make this strange place accessible to you.

People love to thrill at the exotic, and the self-same bourgeoisie who would scoff at awarding an Oscar to something like Lethal Weapon let their guard down if they sense the subject matter or movie is “important,” at which point they recognize that this genre of movie has redeeming qualities, that it works for a reason, and that the movie is really good.

To clarify, I’m not saying The Hurt Locker is bad or doesn’t deserve the praise it’s getting – I’m saying that other movies that are similar to it don’t get nearly as much praise because of superficial differences that trigger people’s prejudices. But I guess there’s justice, because the latter are the movies more people love and remember. To paraphrase Matthew 6, “Be not like the tentpoles auto-greenlit and raking it in at the box office, I tell you the truth, they are already repaid.”

So, yeah, The Hurt Locker is just like Lethal Weapon, except it takes out the villain and the comedy and replaces them with harrowing scenes of human suffering from the war in Iraq. Let’s look at what that means.

11 Comments on “The Lethal Weapon in the Hurt Locker”