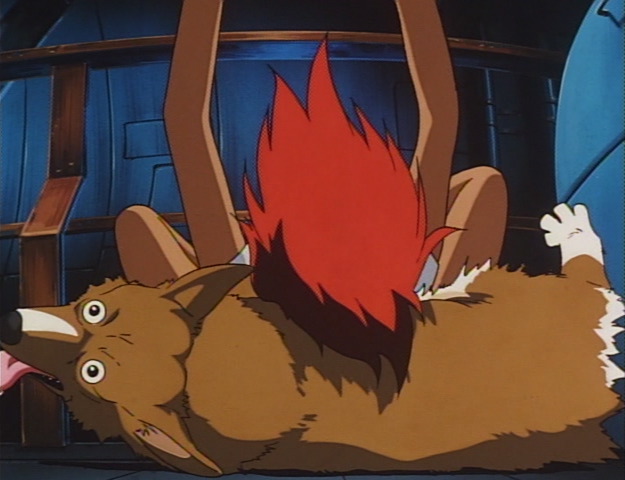 I couldn't find a person with a pet on their head this time, but I did find someone with their head on a pet. Close enough.

12 and 13) And then, hot on the heels of that little orgasm of goofyness, we find Jupiter Jazz parts 1 and 2, which are possibly the moodiest and darkest episodes yet.  Not “Dark!” in a winking, half-parodic way, like “Sympathy for the Devil” or “Ballad for Fallen Angels,” but honestly melancholy to the point of depression.  It telegraphs its seriousness in a couple of different ways…  It’s a double-long episode, which, like a double-disc album or a double-wide trailer, indicates a certain gravity of purpose.  It also marks the return of Vicious, the villain from “Ballad for Fallen Angels” and Spike’s flashbacks in episodes 1 and 6.  I’ve gotta say, Vicious didn’t do a lot for me at first.  I understand that he fits a certain character mold that has proved durable and popular, but… man.  Whenever he rears his ugly immaculately-coiffed head, you can almost feel the writers of the show poking you in the ribs with their elbow and whispering “Hey, isn’t this episode very serious???”  It feels forced and unnecessary:  his tortured relationship with Spike would work a lot better for me if he wasn’t such a caricature.  But I dunno, most Cowboy Bebop characters rub me the wrong way at first.  Maybe if there were more Vicious episodes, I’d get used to having him around.  He improves in this one, a bit, right at the end.

Another annoying writing tic that shows up in this episode is Faye randomly turning into a psychotic hose-beast.  Somewhere in the gap between the last episode and this one (presumably after everyone comes back from the dead), Faye decided to leave the ship.  No wait, she decided to sabatoge the BeBop, steal all the money from the safe, and run off in the dead of night.  This feels… unlikely.  And while we actually learn in the second part of the episode that she did have some reasons that, if not good, are at least vaguely believable, there is nothing believable about Spike and Jet deciding to let her back on the ship at the end.  I mean, I can see what the writers are trying to do with that:  “Home is the place where, when you have to go there, they have to take you in… something you somehow haven’t to deserve,” says Robert Frost.  So maybe it works.  Maaaaaybe. But it’s a stretch.

At least Faye running off to join the circus provides a convenient impetus for the action of the plot.  While searching for her, ostensibly to recover the money, Spike runs across some information about his mysterious lost love, Julia.  But the specifics of this are just incomprehensibly dumb.  Ed just goes searching for Faye in cyberspace, and comes back with a name, “Julia,” and a location, Callisto.  The only way this could have worked is if Ed tried to search for Faye simply by typing the word “Woman” into google… and furthermore, it means that the only other woman mentioned anywhere on the entire internet just happens to be Spike’s ex-girlfriend.  Trust me, I’ve been on the internet.  It doesn’t work that way.  (And if you’re planning on trying this yourself, you may want to turn on the ol’ safe-search. )  Spike’s reaction is even more idiotic, because he immediately drops everything and goes tearing off to Callisto.  Jet even calls him on this nonsense:  “It’s a common woman’s name!”  But apparently not, because while Julia doesn’t actually appear in this episode, she was on Callisto not long ago.  And to fill out the unlikely-coincidence Quinella that the writers have been working on here, Faye actually did run to Callisto after all.

Okay, I needed to get that out.  But let me just say that in most other respects, this episode is a smashing success.  Glaring as the plot holes are, you don’t really notice them when you’re watching (or at least I didn’t).

So like I was saying, Spike goes tearing off.  As he’s climbing into his ship, he and Jet have this deeply weird, deeply bitchy argument where Jet tries to cajole and threaten him into staying, finishing up with the always-reliable “Well if you walk out now, don’t expect me to let you back in!”  Spike, for his part, just says a bunch of really callous and hurtful stuff as if he’s not just trying to burn his bridges, but also sow the river with salt so that no bridge will ever grow there again, and I think that I lost track of this metaphor somewhere along the way, but you get the picture. 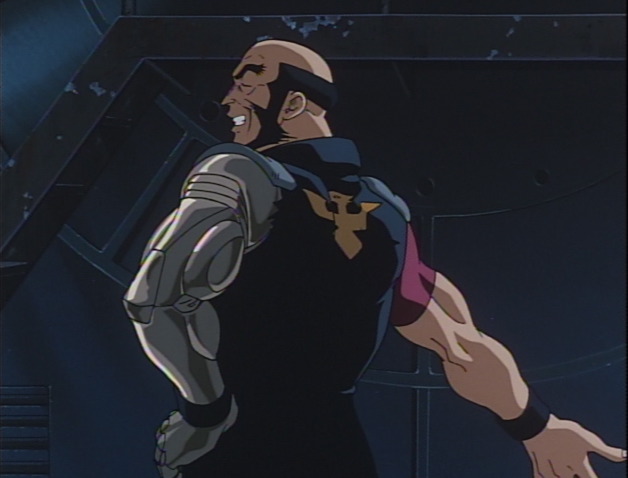 Also, during the fight, Jet does this weird little sashaying dance. Not because he's making fun of Spike or anything - he's just punctuating his argument with (really weird) broad arm gestures. I wonder if there's some Japanese cultural reference that I'm not getting here.

The way this fight is written and performed is very jarring.  It has to be the first time we’ve ever seen Jet really lose his temper.  And it feels like nothing so much as a lover’s quarrel, which is not a vibe that we’ve gotten from these two so far.  But maybe that’s intentional, because this is definitely the “Cowboy Bebop plays with alternative sexuality” episode.  In a big way. 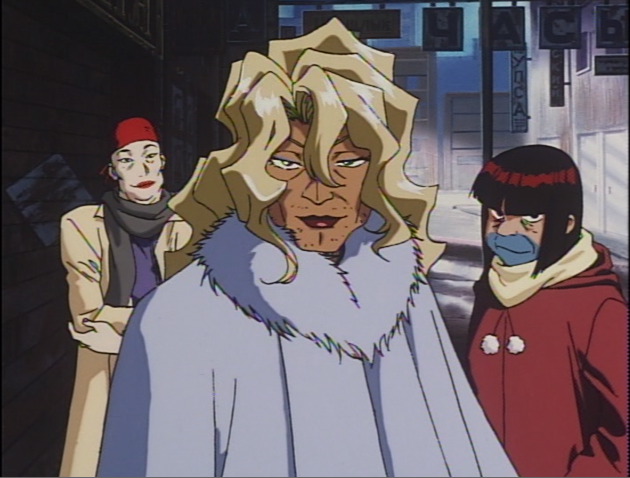 On Callisto, Faye is holed up in a bar getting tanked, apparently hoping that some dudes will try to attack her so that she can work off some steam by kicking the crap out of them.  At the bar she meets Gren, a sax player, and briefly considers working off some steam with him the other way (if you know what I mean) before learning that he doesn’t care for the ladies (if you know what I mean about that too), and they just get drunk together instead.  Meanwhile, Spike goes, like, absolutely King-Kong nuts on some thugs who try to rob him.  Incidentally, you know how I said a few posts back that the first episode of Cowboy Bebop makes it look like it’s going to be all about kung fu?  This is, I think, the first episode since the pilot to live up to that promise.  Theoretically the brawl is motivated by the fact that the thugs mistake him for Vicious – Spike was asking about Julia, and it turns out that the reason her name was floating around the internet is that Vicious is using it as a password for a huge drug deal that he’s running – and being compared to Vicious makes Spike really, really angry. 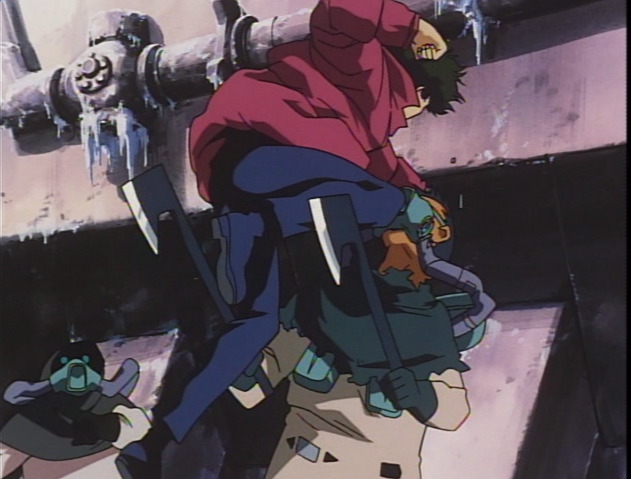 My inner cynic suggests that the brawl is motivated by the two-part special episode having a slightly larger animation budget.  But no matter.  Faye eventually pours herself out of the bar and goes wandering around the streets looking for trouble, which she finds.  Actually, she find the exact same group of thugs that Spike just humiliated.  If they think that they can take their frustration out on her, they’re sorely – OH MY GOD WHAT HAPPENED TO HER LEG??!! 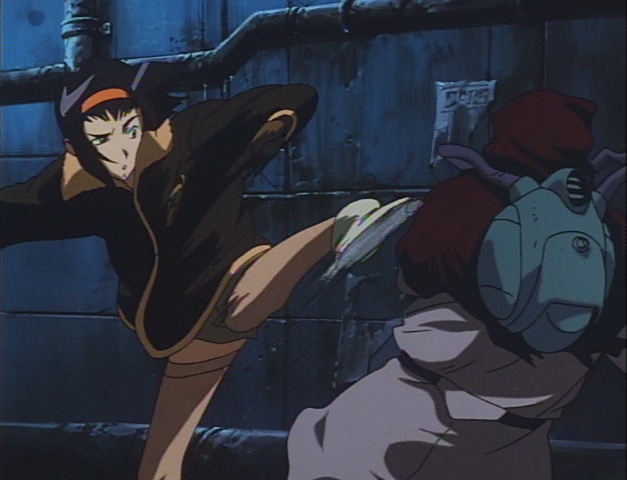 Okay, so actually distortions like this on a single frame are a time-honored way for animators to convey the extreme speed or forcefullness of an action, but that doesn’t make it look any less horribly wrong when I unfairly freeze it as a still image.  Anyway, we never get to find out whether they’d have been able to take her in a fight, because as soon as she flattens that one dude, Gren pops out of nowhere, clobbers the head thug with his sax case, and pulls Faye away to safety by her wrist.

Back at his apartment, they drink vodka and hot water (which actually sounds like a pretty great drink for a brutally cold day), and shoot the breeze.  Faye notices a music box – now where have we seen one of those before? – that Gren is oddly defensive about.  Then he goes off to take a shower, and she notices an old picture of Gren wearing a military uniform… and standing next to Vicious.  (Man, these coincidences are just piling up.)  Meanwhile, Spike and Vicious come face to face on a random frozen street corner.  Spike, who has a pistol, would seem to be at a tactical advantage, but Vicious has an underling  with him, Lin, that Spike has some kind of past friendship with, and is therefore unwilling to shoot.  Back in Gren’s apartment, Faye pulls her gun and marches into the bathroom to confront Gren for… for what, having ever known Vicious? Who Faye, although she certainly has no reason to be fond of him – he did hold her hostage that one time – basically doesn’t know?  Whatever the reason, she barges into the shower, only to learn, in a NSFW sequence, that Gren is actually a hermaphrodite.  Or a pre-op transsexual.  Or something.  Let’s just call him differently gendered and leave it at that, since it’s by no means clear what he identifies as.  In any case, Faye’s reaction is comically disproportionate.  I mean, we’re given to understand that she has seen a thing or two in her day, and she is not generally a woman given to freezing up.  But plot convenience demands that she not actually interrogate Gren at gunpoint at this time, so she freezes up and he takes the gun away.   My best explanation for this is that she must be falling down drunk:  she was already pretty potted at the bar, and by this point she seems to have consumed the better part of half a bottle of Gren’s vodka.  But before that situation can resolve itself, we cut back to Spike, and learn that although he was unwilling to shoot his old buddy Lin, Lin was under no such compunction.  Blam.  Cue the soaring saxophone solo, and the end credits for part one of the episode. 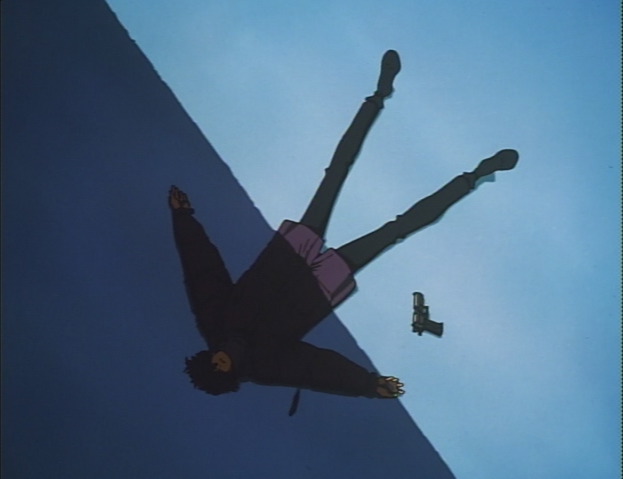 Spike Spiegel Deaths So Far:
1:  Gunned down in a hail of bullets by persons unknown in flashback at start of “Asteroid Blues.”
2:  Thrown off of an exploding cathedral by Vicious at the end of “Ballad for Fallen Angels.”
3:  Poisoned by mutant Lobster at the end of “Toys in the Attic.”
4:  Shot dead by Lin halfway through “Jupiter Jazz.”