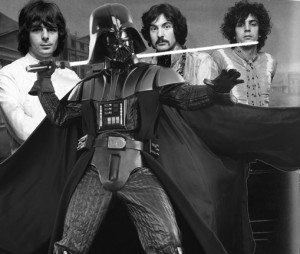 I find your lack of Roger Waters disturbing.

We all know the old rumor that Dark Side syncs up in freaky ways with The Wizard of Oz. Of course, if you play pretty much any album along with any movie, there are bound to be some moments of synchronicity. (The human brain is very good at making connections.) But this got me wondering–what would happen if I played Dark Side along with a different movie? Specifically, a movie that is very associated with the term “dark side.”

Just to be clear, I am not suggesting that Pink Floyd somehow composed an album synced to a movie that hadn’t been made yet, or that George Lucas used Dark Side as a temp score in his editing room. But you have to admit, some of these coincidences are pretty cool.

(Technical notes: I started the album right when the 20th Century Fox logo appears. And sadly, I had to use the Special Edition version of the movie. Like it or not, Lucas has done a pretty good job of tossing the original down the memory hole.)

1:15
Star Wars: The opening crawl tells us about the Death Star.
Dark Side: The introductory track, “Speak To Me,” ends with the sound of screaming (perhaps foreshadowing the destruction of Alderaan?).

2:57
Star Wars: The rebel ship is pulled into a hole in the much larger imperial ship.
Dark Side: “Run, rabbit run. Dig that hole, forget the sun.”

3:59
Star Wars: Rebels are mowed down by imperial stormtroopers.
Dark Side: “You race towards an early grave.”

4:05
Star Wars: The surviving rebels run away.
Dark Side: The song “On the Run” begins.

7:03
Star Wars: An escape pod takes off.
Dark Side: A plane takes off.

10:25
Star Wars: C-3PO wanders aimlessly into the Tatooine desert.
Dark Side: “Kicking around on a piece of ground in your hometown, waiting for someone or something to show you the way.” (In the prequels, we learn that Tatooine is indeed 3PO’s hometown.)

17:10
Star Wars: Luke Skywalker makes him first entrance.
Dark Side: “Great Gig In the Sky” gets quiet all of a sudden.

20:13
Star Wars: Luke complains about how much he wants to leave Tatoine.
Dark Side: “Money, get away. Get a good job with good pay and you’re okay.”

28:25
Star Wars: Luke and C-3PO catch R2 in the desert, and tell him to give up trying to find Obi-Wan.
Dark Side: “God only knows it’s not what we would choose to do.”

33:40
Star Wars: Obi-Wan gives Luke his father’s lightsaber.
Dark Side: The song “Any Colour You Like” begins. (Maybe a bit of a stretch, but it certainly is colorful. Sorry: “colourful.”)

37:40
Star Wars: Grand Moff Tarkin: “Fear will keep the local systems in line. Fear of this battle station.”
Dark Side: “Got to keep the loonies on the path.”

38:40
Star Wars: Vader Force-chokes an underling.
Dark Side: “I’ll see you on the dark side of the moon.”

40:25
Star Wars: Luke discovers that his home has been burnt and his foster parents are dead.
Dark Side: “I can’t think of anything to say except… I think it’s marvelous! Hahaha!” (Perhaps he is secretly excited that he can finally leave the planet?)

I highly recommend this combination, by the way. The section that works best is “On the Run,” towards the beginning. Arpeggiated synths make a completely believable soundtrack for fleeing robots. But the whole movie was a new experience with Dark Side. Subbing out the John Williams removes a lot of the energy from the film, which makes it easy to relax and enjoy the visuals. In other words: Pink Floyd makes things mellow. I’ll take my Nobel Prize now.

(By the way, as the title implies, this could become a series. Let me know if there are any movies you think would play nicely with Dark Side.)

12 Comments on “The Dark Side of Everything: Star Wars”