BSG has been “overthought” (overthinked?) to death over the last few years. Lots of blogs dedicated to it, especially during its final season. If I have to read one more post about how “the humans are acting like robotic killing machines… how ironic!”, I will… well, not read it.
—Kevin 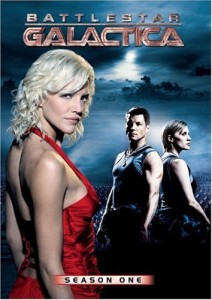 Welp, for good or for bad, I have taken Kevin’s words to heart.  After watching the first eight episodes of BSG, I spent most of this week trying to figure out what the heck to write about them.  Rule of law, the nature of the soul, the ever-shifting line between freedom and safety: so far, these themes have been so close to the surface that you almost can’t call them “subtext” anymore.  They’re pretty “text text,” as it were.  (Or should we call them “supertext”?)  In any event, I don’t want to bore you, Kevin, or anyone else.  I won’t be retreading any topics that have almost certainly been written about before.

So I said to myself: if I’m going to write about Battlestar Galactica, but I’m not going to talk about political theory, religion, or robot ethics, what’s left to talk about?  When I thought about it, the answer was obvious.

Yeah, you heard that right, kids.  Get ready to psychoanalyze some Cylons!*

*Don’t worry; I’m not going to be talking about Oedipus.  Not much, anyway.

Episode 1.1 (“33”): The Cylons have been tracking the BSG and the rest of the human race for five days straight.  Unfortunately for the human race, the Cylons keep figuring out where they are every 33 minutes, which means no one has slept for those five days.  So everyone’s nerves are pretty frayed by the time they hear that the Olympic Carrier, a passenger ship, probably has Cylons and/or nukes on it.  Adama and Roslin correctly decide to destroy it; Starbuck has doubts.  Meanwhile, a copy of Boomer has landed on Caprica to seduce Helo for some reason, and a religious Number Six wants Baltar to make robo-babeez with her.

Episode 1.2 (“Water”): On the BSG, Boomer 1 comes to the realization that she may be a Cylon when she wakes up to find herself with a bag of explosives at her feet.  Then the BSG’s water supply blows up.  Adama asks Baltar to invent a Cylon detector.  The Chief thinks his girlfriend the robot has been framed.

Episode 1.3 (“Bastille Day”): There’s water on a nearby planet but not enough hands to bring it up to the ships, so Apollo suggests getting some prisoners to do it in exchange for their freedom.  Apollo, Dee, Cally, and Billy go to the prison ship, only to get held hostage by a famous terrorist/political prisoner (Tom Zarek) and his crew.  Zarek wants Roslin to step down as president and hold elections.  Apollo agrees and makes a deal with Zarek: he’ll get his elections in a year if he and his friends help with the water extraction.

Episode 1.4 (“Act of Contrition”): Adama asks Starbuck to train new fighter pilots to fight the Cylons, but she refuses to teach the kids because of what she did back in the past.  Cue flashback: Starbuck used to be engaged to Zak Adama and passed him in basic flight even though he was a terrible pilot, and then he got into an accident and died.  End flashback.  Starbuck tells Commander Adama about this, he gets mad, she goes out to train the students and gets hit when the Cylons attack.  She falls down to the planet and to be continued.  Meanwhile on Caprica, Helo and Boomer 2 find a bomb shelter.

Episode 1.5 (“You Can’t Go Home Again”): Starbuck is stranded out on the rock she landed on and has very little oxygen.  Adama sends ships out to find her.  Roslin argues this is a waste of resources and could mean their downfall.  I agree with Roslin but find myself having new feelings of warmth toward Commander Adama.  Curse you, show.  Way to manipulate me.  Anyway, Starbuck gets home by finding a Cylon raider — which is totally a sweet bio-ship! – and figuring out how to fly it.  Meanwhile on Caprica, Helo gets knocked out by Cylons, and Boomer 2 hangs out with her robot buddies.

Episode 1.6 (“Litmus”): A copy of Doral suicide bombs himself on the BSG because almost no one knows that Cylons look like humans now.  Adama orders an independent tribunal to figure out who helped him get on board.  Sergeant Hadrian — who is made to seem unlikable, but she’s only doing her job, show – interrogates everyone and comes to the conclusion that Chief Tyrol was involved in the attack.  (Really he was banging Boomer 1, which is not allowed.)  Luckily for the Chief, one of his men takes the blame.  Hadrian then interrogates Adama about all this but Adama doesn’t believe in rule of law — even when he himself ordered the tribunal in the first place, hello!  He marches straight out of there.  The Chief breaks up with Boomer, suspecting that she’s a Cylon.

Episode 1.7 (“Six Degrees of Separation”): Number Six, a religious nut, argues with Baltar, an atheist, about God.  Then she gets angry and disappears.  She turns up later in the flesh as Shelly Godfrey — nice name, writers — and tells Adama that she has proof that Baltar caused the apocalypse.  Gaeta analyzes Shelly’s proof and finds out that, yes, Baltar is the man with the bomb in her photograph.  Baltar is sent to the brig, where he starts begging God for mercy, much to Number Six’s delight.  Miraculously, just then Gaeta discovers the photo was doctored, so Baltar goes free.  Number Six reveals to Baltar that this was some roundabout plan to make him into a hero.

Episode 1.8 (“Flesh and Bone”): One of the passenger ships has a Cylon on it: a copy of Leoben Conoy.  Adama asks Starbuck to interrogate him (it?).  Leoben claims he planted a nuke on one of the ships.  Starbuck physically tortures him to get the info; Leoben psychologically tortures her for a reason that’s kind of unclear.  Eventually Roslin gets Leoben to admit there was never any bomb, and she orders him thrown out the airlock.  In other news, Baltar’s Cylon detector has detected Boomer 1, though he hasn’t told anyone yet.  On Caprica, Boomer 2 has actually fallen in love with Helo and decides to help him escape Number Six and Doral. 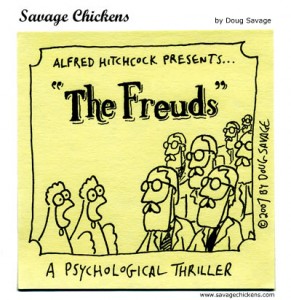 “Identification is a substitute for a lost human relationship.”
-Freud

In my first post in this series, I focused primarily on Adama’s first big speech in the miniseries.  You know, the one where he basically conflated humanity’s relationship with the Cylons with his own failed relationship with his son?  And then he went onto suggest that these relationships all run parallel to the relationship between God and his sinful children?  Remember?

What’s an object relation?  It’s the relationship between a person and an object.  Duh, okay, but what’s an object?  Here, we’re not talking necessarily about a physical object that can sit on your desk.  Here “object” means, roughly, “the object of one’s desire.”  In most cases, this object is a person, and, in many cases, that person is a parent or a stand-in for a parent.

Last week, I tried to guess what the Cylons’ ultimate motivation was, and it seems to me now that the only way to make sense of their actions in the show thus far** is to apply object relations theory.  Under this theory, the most important thing to a person isn’t his or her own personality, but his or her relationships to objects – or lack thereof.

So rather than focus on the psychology of any individual Cylons or humans, I first want to focus on the dynamic between the Cylons and the object they think about more than anything else: the human race.

Question one: what do the Cylons actually think about humanity?  The question is not as simple as it first seems.  As ironic as it is to say, the Cylons’ feelings about humanity are complex and varied.  To wit:

Humans created Cylons and then abandoned them.  There’s a kind of Frankenstein/Frankenstein’s Monster thing going on here.  Anyway, they fought a war and the humans apparently won.  Then the Cylons came back and blew most of them up.

Cylons hate humans but not enough to kill all of them.

Look, the Cylons had every opportunity to destroy all of humanity, down to the last man, including those on the Battlestar Galactica.  What with Boomer 1 and Doral and “Shelly Godfrey” and “Leoben Conoy” cavorting around the BSG as they please with nukes strapped to their chests… if the Cylons wanted humanity dead, I’m pretty sure we’d be dead.  And yet, the human race survives.  WTF Cylons?

Cylons hate humans but not enough to kill all of them and also they seem to like some individual human beings.

I could be very, very wrong about this, but it seems to me that Number Six does take some real pleasure in being Baltar’s imaginary girlfriend.  Maybe there’s a secret, sinister reason why she talked to him about their having robo-babies together and why she seemed so upset when he said he didn’t believe in God.  (She also seems to be jealous of Starbuck when she talks about her.)  You ask me, Number Six wants a real relationship with Baltar and is hurt when he doesn’t agree with her.  (I admit I could be dead wrong about this.)

Number Six aside, it also seemed to me that the copy of Leoben Conoy from episode eight legitimately seemed to want to help Starbuck out with her psychological problems and did want the human race to reach Earth for some reason.  And, of course, we can’t forget about Boomers’ 1 & 2 love for the Chief and Helo, respectively.  As the posters to Steven Spielberg’s AI (basically) said, she may not be real, but her love is.

Cylons hate humans but not enough to kill all of them and also they seem to like boning them.

On a related note, although the Cylons are purportedly “humanity’s children,” they sure seem to like having sex with their human parents a whole lot.  Just sayin’.  (And there’s my Oedipus reference for the day.)

Cylons hate humans but not enough to kill all of them and also they remade themselves in humanity’s image.

Yes, you can argue that they did this to infiltrate our ranks and kill us more easily, but, really, did they need to imitate us that well?  All they needed to do was look human enough get past the BSG’s security.  You don’t need to be programmed with love, sorrow, and religion to get past a security checkpoint.

Long story short: Cylons try to be like us, they bone us,  they seem to enjoy hanging out with some of us, they don’t kill us even when they have every opportunity to…

Personally, I think the Cylons love us a little bit.

But wait! you say.  How can Cylons love humanity but also want to destroy us?  For that, we have to talk to the object relations theorists.

**Other than to impute them to bad writing.  Cough.