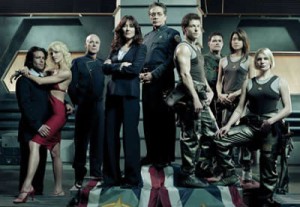 Which is weird, I’ve gotta say, especially when you consider what a big nerd I am.  You know what’s sitting on my nightstand right now?  Arthur C. Clarke’s Rendezvous With Rama.  Yes, friends.  I’m that nerdy.

Going into this new series, I only knew these few facts about BSG:

So, yeah.  I have that to look forward to.

Naw, to tell you the truth, I was super-excited that you folks picked Battlestar Galactica for me, and it was with gleeful anticipation that I snuggled up on a friend’s couch to watch the miniseries.

That glee was immediately dashed to the ground, its blood-glistening brains left to dry up on the floor.  Because, my friends, Battlestar Galactica: The Miniseries may be the bleakest, most misanthropic piece of television I have ever seen.*

That isn’t to say I don’t like the show, of course!

But that’s what I want to talk about today, in this first of a many part series on the new BSG.  Bleakness.  Depression.  Ennui.  Despair.  Misanthropy.

Mmm!  Sounds fun!  But first, let me recap the miniseries for those of you whose minds haven’t been colonized by Cylons lately.

*Well, except for Neon Genesis Evangelion, maybe.  Anyway, the race is close.

Battlestar Galactica The Miniseries: The Recap

Once upon a time, millions of people lived on twelve colonies somewhere in the vast expanses of Space.  Those millions of people invented robots, called Cylons, which became sentient and decided to kill their masters for some reason.  The Cylons and humans fought a war, and the humans won.  Hooray!  Hooray for humantity!  Only good things can happen from now on!

Ha.  Fooled you!  You thought this show would be optimistic.  But that was just the prologue!

Because now, the robots have come back, and some of them look like peoples!  And some people who believe themselves to be humans are really sleeper Cylons waiting to be activated!  And every time you kill a human-looking Cylon, it doesn’t matter, because they have copies of themselves and can transport their consciousness from one body to another by some kind of robot-Internet!

Man, Cylons are overpowered.  And what do they do with these nearly-magical powers?

Easy.  THEY BLOW UP EVERYTHING. 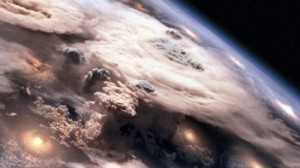 But, lo, is that some hope on the horizon?  Is that the Battlestar Galactica?  Yes!  Yes, it is!  The luddite’s dream, the galaxy’s only analog spaceship!  If everything else in the Twelve Colonies was a Mac, the BSG is a PC.  Except it can’t get viruses because it doesn’t have a wireless network.

Because the Battlestar Galactica is so outmoded (it was actually a flying museum before everything got nuked) and so well-insulated (it was used in the previous Cylon War), it’s the only human-inhabited thing in the galaxy the present-day Cylons can’t manage to destroy.  On this ship are:

Let me make special mention of Dr. Gaius Baltar, who gave the Tricia Helfer-bot (a.k.a. Number Six) access to the government mainframe in exchange for hot robot sex yada yada yada.  That’s not what I care about.  What I care about is his absurd likeness to Dr. Julian Bashir, a character from Star Trek: Deep Space Nine, a show written in part—wait for it—by Mr. Ronald D. Moore.

So, Commander Adama, the world has just ended, you were supposed to retire, and humanity has just been added to the endangered species list.  What are you going to do now?

B)    Hide somewhere until you figure out how to fight the robots!

C)    Pick a new planet in a new galaxy far, far away from the robots to colonize and start human civilization again from scratch.

D)    Go on a mission to find some mythological planet that no one knows about and that you admit probably doesn’t exist, all while the robots continue to chase you.

And that’s the end of the miniseries.  Some other things happened along the way—New President Lady started a convoy, Starbuck punched out Colonel John McCain and saved Lee’s posterior, Tricia Helfer is possibly living in Baltar’s MIND—but you get the picture.