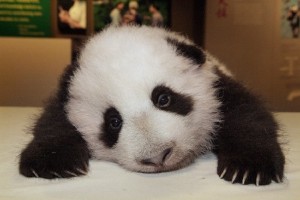 Since she has brought closure—at least for now—to her formidable series of articles Overthinking Lost, Mlawski is a sad panda. She has nothing to write about. See how sad?

She brought this problem to the Overthinking It writers’ email list, and we had one word for her:

(Well, we didn’t really have one word for her, because we never say just one word to one another. You think the 3,000 word posts are extreme? You should read our email threads. In fact, lately, we have taken simply to publishing them.)

And she agreed! That is, she agreed to put the question to you: What should Mlawski overthink next?

Cast your vote here. (If you’re using your RSS reader, you have to click through to the full post.) If you don’t see a choice you can live with, write it in below as a comment.

And don’t be mean—we don’t want to force her to sit through some godawful thing. Because then you’d have to wade through a lot of articles about it. So…

What should Mlawski overthink next?

Or read more from… Culture, pandering

31 Comments on “What Should Mlawski Overthink Next?”