When we talk about video game RPGs—as opposed to tabletop RPGs like Dungeons & Dragons or Vampire: The Masquerade, or roleplaying performance like acting or improv theater—we’re talking about a set of games with recognizable characteristics. They may be lines of monochrome text, like the original Colossal Cave Adventure or Zork. They might be dungeon crawls with sizable parties, like the Might & Magic series or Dragon Quest. They might be the world-spanning epics we’ve come to associate with Japan, like the Final Fantasy saga. These games cover a disparate range of play styles, play experiences and settings, yet everyone calls them RPGs.

For one thing, the original console RPGs – Final Fantasy, Dragon Quest and the like – were all intended to emulate other things that we called RPGs, like Dungeons & Dragons. So calling them the same thing made sense: this is just like the RPG you play with your friends, only you’re playing it on a Nintendo. Even if later games like the Final Fantasy series weren’t meant to emulate the D&D experience, they had evolved from games that had. So we can trace every console RPG through a chain of descendants back to the original tabletop RPGs that inspired them. 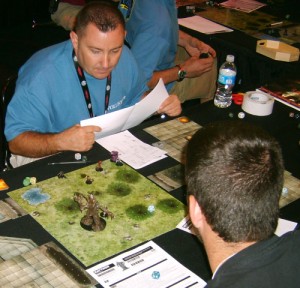 Would you replace this man with a computer?

Even a casual gamer can tell the difference between a console RPG and a pencil-and-paper RPG. For one, even the most sophisticated video games present the player with a narrower range of options than a tabletop RPG. I might have a wide range of attacks and powers I can select to defeat this bandit, but I can’t bribe him to leave me alone, or reason with him, or climb a tree and wait for him to lose interest, unless the programmers anticipated that option. The most advanced computer in the world has yet to match the improvisation and initiative of a 13-year-old with the Dungeon Master’s Guide and a fistful of dice.

But that’s an aside. Here’s the crucial difference between tabletop RPGs and console RPGs: in a video game, you’re not really playing a role. When a player sits down with his friends to continue the adventures of Lothar and the Hill People, he adopts the mannerisms and attitudes of a muscled barbarian, not the network engineer he was this morning. Different players immerse themselves to different degrees – they’re not all Stanislavsky – but everyone shares that acting-as-other mindset.

Yet you don’t see that in console RPGs.

22 Comments on “A Slime Draws Near. Command?”