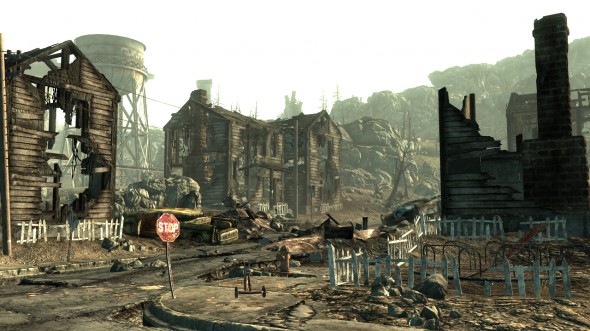 The door claps against the house in the breeze, like a sarcastic friend greeting me.

Big Town has been decimated. The smell of human flesh baking in the sun tells me I’m too late by only a matter of hours. The swinging chain-link gate on the bridge into town was knocked clean over, its post uprooted. Windows are shattered from gunfire; sheet metal walls ripped off their welding.

I fill my canteen from the cistern in the center of town, surveying the wreckage. Anyone the Super Mutants didn’t kill or drag off has probably fled already. I didn’t pass them on the way here, meaning they’re heading north or west, most likely. Enclave territory. The Enclave won’t have much use for them; maybe take them in as serfs. Probably feed them better than they managed here.

I stumble toward the nearest house, turning off Galaxy News Radio, ready to flop down on a mattress and pass out. Then I stop and give the town another look. Sure, some of the doors have been ripped off their hinges and the entire town reeks of sweet burnt flesh. But the buildings are largely intact. There’s a major road that passes a few hundred feet nearby and an intact cistern. And I know the folks from Little Town will send someone else by eventually.

Laying down my .30-06, I return to the bridge that leads into town. I grab the gatepost, squatting down and reaching between my feet, and lift. I struggle with it for a good thirty seconds, the awkward weight of the chain-link gate swinging the post erratically. Then I finally push it past my chest and up over my head. Walking it forward, I push it all the way upright until it slides back into the hole it was knocked out of. Big Town has a gate again.

“The difficult, I’ll do right now / the impossible will take a little while …”