You never get away from the dust.

I feel it crunch beneath the palm of my hand as I lower myself to the ground next to the rusting Corvega, resting the .30-06 along its bumper. I brush my hand absently on the padded leather pants I stole off my last victim, not noticing if the dust goes anywhere. Taking a deep breath, trying not to choke on the dry grit in the air, I lower my head to the scope.

I turn down Galaxy News Radio in my earpiece, but don’t turn it off entirely. I’ve reached the point where I can’t stand to switch it off. Letting the silence take over feels like acknowledging despair – letting the world win a war that’s already over. Still, I have to wonder where Three Dog pulls these albums from. He told me some of them are over three centuries old. I can’t think of the last working thing I saw that’s three decades old.

“And you will note there’s a lump in my throat / when I speak of that wonderful guy!”

The raiders one hundred yards down the road – snarling and merciless in spiked leather and chains – have pushed two cars across the front of the highway, angling them to create a narrow chokepoint. I could backtrack the mile I spent climbing this highway and walk overland, hoping all the yao guai are hibernating. But I need to make Big Town by nightfall and top off my canteen. These bastards parked between me and the next 24 hours of my life. And that’s all it takes.

I dial the scope gingerly, squinting through the chipped and faded My First Telescope that I’ve strapped to the top of the rifle. A raider’s shaved head bobs into view, shadowed by the Brotherhood of Steel issue rocket launcher strapped to his back. I take a breath, let out half.

A brash cry jerks my head up. Another raider, at the opposite end of the improvised barricade, spotted the sunlight flash on my scope. He approaches my hiding place with cautious steps, sliding the TEC-9 out of the DKNY clutch he’s appropriated as a holster. He’s coming from my right. In forty yards, there’ll be nothing between him and me but asphalt. 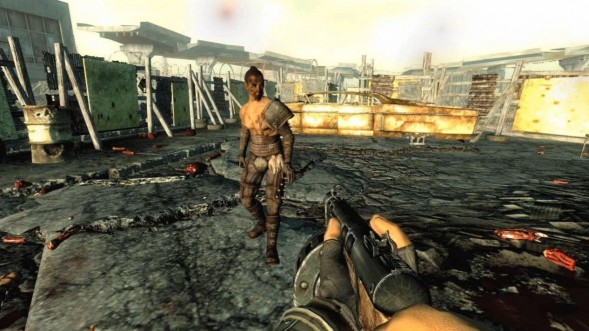 Swearing, I swing my rifle around, glance into the scope, and squeeze a shot off. With no time to reset the range I hit him on pure luck – a one inch slug that tears his left knee halfway off his leg. He collapses, screaming, and the gun clatters out of his grip. I swing back as the guy with the rocket launcher begins to unlimber it off his back. One in the shoulder slows him down; another in the throat stops him.

Now the other three raiders – I counted two before – have cleared their holsters and taken cover behind their car barricade. Automatic fire peppers the car I hide behind. A bullet gouges the asphalt inches from my right foot, sending shards of stone into my hand and face. I wince, gasping but not screaming. The bastard I kneecapped’s doing plenty of that.

I’d rather save this last grenade for the Super Mutant I know the sheriff in Big Town’s going to ask me to take out, but I only have one shot left in the mag on my rifle and they’ll be on me before I reload. One of the raiders is already waving his friend toward me: flank him; I’ll cover you.

I pull the pin on the grenade. Instead of throwing it, I roll it from under my car toward theirs. It bounces over a loose stone – just high enough that they see it coming – and lands neatly in the cinderblock that’s propping up their car’s engine. Nuclear-powered, as was every 2075 Corvega.

The glare blinds me. The rush of heat and wind knock me hard onto my back. My counter ticks in panic as the burst of rads blows over me. I stay there, waiting for the ticks slow to one every ten seconds, until I open my eyes.

My legs. stiff with tension, throb in protest as I stand. The surge of nuclear heat in the cool air above the overpass has kicked up an impressive gust of wind. The man I wounded with my first shot is gone. So is the man with the rocket launcher, his rocket launcher, his three clever friends and the cars they hid behind.

There’s no one left on the road ahead. Just me and the dust.