Just sit right back and you’ll hear a tale,
A tale of a fateful trip
That started from Sydney, Australia
Aboard Oceanic Flight 815.

The plane set ground on the shore of this uncharted desert isle
With Jack Shepherd,
The con man too,
The Asian guy and his wife,
The fugitive,
The torturer and John Locke,
Here on Henry Gale’s (maybe?) Isle!

Well.  That was fun.  But it’s not all fun and games today, kids.  I’m being perfectly serious.  Obviously Gilligan’s Island and Lost are similar in superficial ways—my above song shows that quite clearly.  And hilariously.  But that’s not what I want to talk about today.

I think Gilligan’s Island can help me continue to answer Eric’s question from last week, a question I think I couldn’t properly wrap my head around until after I saw Lost’s season two finale.  Eric asked about my theories about fate and free will on the Island, particularly in regards to that damn hatch button and timer.  This isn’t only Eric’s question; this is a question brought up time and again in the show itself.  Are we on this island for a reason?  Is this our fate?  Must we push this cursed button?  Or are we free to do what we wish?

First, I think a trip to the dictionary is in order.  What are we talking about when we talk about fate?  Dictonary.com says fate is

1.    something that unavoidably befalls a person; fortune; lot: It is always his fate to be left behind.

2.    the universal principle or ultimate agency by which the order of things is presumably prescribed; the decreed cause of events; time: Fate decreed that they would never meet again.

3.    that which is inevitably predetermined; destiny: Death is our ineluctable fate.

4.    a prophetic declaration of what must be: The oracle pronounced their fate.

5.    the Fates, Classical Mythology. the three goddesses of destiny, known to the Greeks as the Moerae and to the Romans as the Parcae.

The Fates: Athos, Porthos, and Aramis. Groucho, Chico, and Harpo? Damn my memory.

Okay, let’s take these definitions apart.  We can see from the above definitions that fate is inevitable.  Fate involves time.  It usually has a negative connotation.  Fate can be prescribed by goddesses.

Last week, I said that fate must be religious in nature.  If fate is what is decreed to happen, someone has to do the decreeing.  That person can be a Christian God, the Fates, Lady Luck, or the supernatural/electromagnetic forces of the Island.  But someone or something mystical has to make things come to pass, or it’s not really fate.

Eric rightly said, Well, that’s one way of thinking about it.  But fate doesn’t have to be written by anyone.  Just look at definition number 1.  Fate is something that ultimately befalls a person; that doesn’t necessarily imply that someone else chose or created that fate.  Something can be fated but not chosen.  Okay, I guess I’ll buy that.  I do think most people would say that the word “fate” implicitly suggests some religious elements, but I could just be making that up.  But there’s one thing we and all of the above definitions can agree on: whatever fate is, and whatever causes it, you can’t fight it.  What is to be, will be, regardless of who, if anyone, decided it.

I argued last week that pushing the button was not fate-related.  Yes, the characters on the island have to do it—they have little free will when it comes to the timer—but there’s a difference between fate and duress.  If someone like the Dharma Initiative says “do this or else everyone dies,” that’s not fate.  That’s duress.  The characters are being forced to do it.  They’re not being forced by supernatural beings or forces.  They’re being forced by a film strip and their own lack of courage.

Then Locke got the courage.  I’m not quite sure how he went so quickly from, “I have faith in everyone and everything, including the button” to a nihilist who thinks his little pathetic life and the button have absolute no meaning, but whatever.  More power to him.  He’s come over to Team Rationalist—my team.  Thank you, John.  Even though your actions have possibly led to the downfall of everyone on the Island, your decision to destroy the hatch computer made at least one viewer very, very happy.

So we see that Locke has free will.  Being forced by the Dharma Initiative to push a button can’t be “fate,” because Locke was able to disobey it.  Remember, according to the definitions, fate must actually occur, or else it’s not really fate.

“But, Shana,” you’re saying (I know you’re saying it), “what if Locke was meant to destroy the computer?  What if he was fated to do that?  Remember that when Desmond failed to push the hatch button, it led to the crash of Oceanic Flight 815.  Maybe he was fated to screw up his button duties so the plane bearing Jack, Kate, Sawyer, and the rest would come to this very place for a very specific purpose!  And maybe Locke was supposed to make some other plane crash for another specific purpose!”

To that, my friends, I can only say this.  Let’s take a look at Gilligan’s Island. 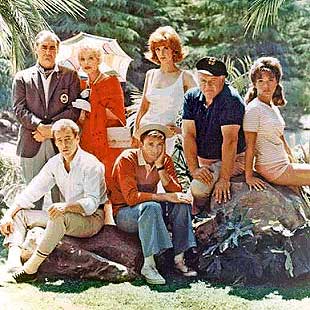 Gilligan’s Island, for those of you who don’t know, don’t remember, or don’t care to remember, is a show about a bunch of castaways on some deserted island.  Every week, the Professor uses his know-how of coconut and bamboo technology to build some kind of device or boat or something to get off the island.  While he’s doing this important work, most of the other characters are off in their own meaningless dramas.  Finally, the time is right to use the Professor’s new technology.  And what happens?  Gilligan screws it all up.  They stay on the island for another week.  Tune in next time.

Now tell me this: is this Fate?

Remember the above definitions.  Fate is something that inevitably befalls a person.  Well, inevitably, every week, Gilligan screws up one of the Professor’s inventions.  Inevitably, everyone remains on the island.  This is what Must Be.  It is Gilligan’s destiny.

But some of you are saying: “No, no, that’s totally different!  There’s nothing supernatural going on on Gilligan’s Island!  There’s no Dharma Initiative or Others mucking about behind the scenes.  The only thing forcing Gilligan and co. to stay on their island is the convention of weekly television programming.  The only reason they can’t get off the island is because, if they did, the show would end.”

Tell me, friends.  Look inside your hearts.  Is that not the same thing as Fate?  Is there truly a difference between Gilligan’s and Lost?

I’ll admit, my tongue is a little bit in my cheek.  But it’s not stuck there.  It’s just poking around.  Because, for the life of me, I can’t really tell if there’s a difference between Lost and Gilligan’s Island when it comes to issues of fate vs. free will.  Either both shows run on a fate principle (they can never get off the island—they are destined to be here—they have a reason to be here), or they both don’t and everything’s based on a coincidence and circumstance.  I can’t really see much of a difference, fate-wise, between the two shows.  I could definitely see the Professor drinking himself to near-oblivion, screaming, “We’re stuck in a bloody snowglobe!  There’s no world except for here!”  And he might very well be right.  You know, when Gilligan’s Island ended, they didn’t get off the frickin’ island?  They could still be there for all we know!  Because it’s their destiny!

When I watch Lost and Gilligan’s Island, the only fate I see is the fate made by the shows’ respective writers.  Any evidence you can give me from Lost that proves that its operating under a fate-principle can be explained away equally as well by a rational explanation.  It might be a science-fictiony explanation, but it will still be based on physical evidence, such as another Dharma Initiative film strip or a flashback.

Moreover, even if there were some reason for the characters to be on the Island, and even if it does turn out there was a reason for these specific people to be pushing that hatch button, that doesn’t necessarily mean they were fated to do so.  It could just mean someone—maybe the Dharma Initiative, maybe the Others and their possibly-psychic kidnapped children—forced them to do so.  That’s duress.  That’s not fate.

…Um, why does something tell me I’m going to be biting my tongue about all this in a few weeks?   I’m also fairly sure I’m going to get in trouble over this fate-bashing in the comments.  Well, let loose.  Just remember, no spoilers. Fate has decreed you will not spoil me.

Next time on Overthinking Lost: Team Jack gets picked up by The Love Boat?

Or read more from… Featured, TV, gilligan’s island, Lost, no fate but what we make