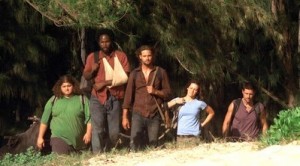 One day not too long ago, an innocent crew crash landed on a deserted isle in the middle of the ocean.  Using their wits alone, this diverse group of people learned to work together to devise many ingenious ways of getting off their island.  Again and again, their plots were foiled.  But did they give up?  No, never.  Because they were Men.  Because they believed.

This is the story of those men.

This is the story of Gilligan’s Island.

Seriously, though: this week I’m writing a post about the parallels between Lost and Gilligan.  Strap in.  This is going to be a crazy ride.

But before we get to the poor survivors of the Minnow—I mean, Oceanic Flight 815, let’s recap the last eight episodes.

Episode 2.17 (“Lockdown”): In the past, Locke’s father played dead to outrun the mob or something.  In the present, the hatch doors lock down on Locke’s legs (oh, the irony), and Henry Gale has to save him.  Locke also finds a weird map on the hatch door.

Episode 2.18 (“Dave”): In the past, Hurley made up a guy in his head.  His name was Dave.  In the present, imaginary friend Dave tells Hurley the island is made up in his mind and that he should jump off a cliff.  He doesn’t, so the show continues.

Episode 2.19 (“S.O.S.”): In the past, Bernard and Rose were a-freaking-dorable.  Also she had cancer.  In the present, Rose apparently doesn’t have cancer.  Oh, island.  You so wacky.  Plus, Jack and Kate get “trapped in a net” and find Michael.

Episode 2.20 (“Two for the Road”): In the past, Ana Lucia escorted Jack’s dad to Australia.  In the present, Michael is acting totally suspicious.  I think, “Oh, he’s going to free Henry Gale.”  Which he does.  AND ALSO KILLS ANA LUCIA AND LIBBY OMFG!  Lost really doesn’t like keeping its female characters alive, does it?

Episode 2.21 (“?”): In the past, Mr. Eko the priest was asked to evaluate a potential miracle—a girl coming back to life.  In the present, Eko forces Locke to lead him to the ? on the map Locke found on the hatch door.  The ? hatch is Station 5: The Pearl.  Its orientation video suggests that Jack was right all along; the timer and hatch button are some kind of psychological experiment.  Locke has a mini-breakdown over this.

Episode 2.22 (“Three Minutes”): Thirteen days ago, Michael made a deal with the Others.  If he frees Henry Gale and brings them Jack, Kate, Sawyer, and Hurley, They set his Walt free.  In the present, Michael says he and the four list people should go beat up the Others.  Sayid, being badass, knows Michael is “compromised.”  Thank god for Sayid, the least stupid person on the island.  Too bad he likes to torture people.  Otherwise I’d be the head of his fan club.

Episode 2.23-24 (“Live Together, Die Alone”): In the past, Libby gave Desmond a boat so he could sail around the world and win back his girlfriend, whose rich dad is kind of a dick.  Instead of doing that, Desmond lands on the Island and pushes the hatch button for three years with his pal Kelvin.  Holy crap, is his name really Kelvin?  How ridiculous.  Anyway, Desmond accidentally kills Kelvin and lets the timer run out, which theoretically caused Oceanic Flight 815 to fall out of the air.  Oops.  In the present, Sayid, Sun, and Jin sail around the island to the Others’ camp, but it’s empty.  Also, they find some weird four-toed statue.  Creepy.  Michael sells out Jack, Kate, and Sawyer in exchange for Walt and a boat; Hurley gets to go free to scare the rest of Team Jack into staying the hell away.  And my favorite part: Locke says, “Screw this,” and let’s the hatch timer run out.  Sure, he seems to have been wrong—some very bad seeming electromagnetic discharge makes the whole island shake and the sky turns purplish white—but the world doesn’t end, either.  So score one for Locke?  Hey, I would have done it.

Or read more from… Featured, TV, gilligan’s island, Lost, no fate but what we make