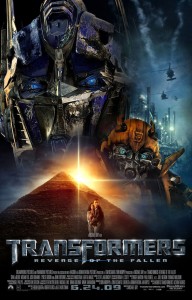 Transformers: Revenge of the Fallen has arrived in theaters, and to no one’s surprise, Michael Bay has stayed true to form and given us a loud, action-packed summer blockbuster. Also to no one’s surprise, critics have savaged his latest work: the Rotten Tomatoes aggregated review score comes in at a meager 20%. And again, to no one’s surprise, the idiot savants of the blogosphere have, as if by reflex, piled on the Bay hate and lampooned his heavy handed filmmaking techniques and lack of sophistication.

The Overthinkers are by and large of the same opinion: we see Michael Bay movies as the epitome of style over substance, cleavage over character development, and explosions over elegance. He does make a convenient whipping boy for the shortcomings of mainstream commercial cinema these days, and as such he’s been the butt of jokes on several occasions on this site.

That being said, I’d like to use this occation, the release of Bay’s latest fil…er, movie, to take a step back and examine his body of work more objectively. How bad is Michael Bay, really? And how does he compare to some of the greatest directors of our time?

As you’re probably aware, almost any effort to objectively analyze the inherently subjective nature of movie quality involves turning to the vast database of user ratings on IMDb. It’s an imperfect methodology, I know, but it’s better than nothing. This is not the time to argue the merits and meanings of the IMDb user ratings (if you’re interested in such things, you should probably check out this earlier piece of analysis on the topic). This is time to take the data we do have, fire up the Excel, and get to work.

First, let’s see how well Michael Bay’s seven major features prior to Transformers: Revenge of the Fallen have fared among IMDb users: 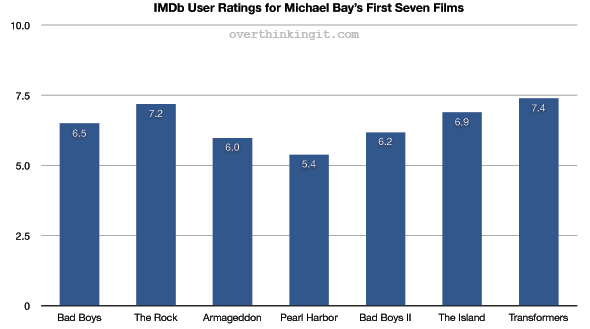 (Note: I’ve omitted the most recent Transformers movie since, as of this writing, it’s too early to get a good read on the movie’s rating. IMDb scores are typically inflated for the first weeks/months after a movie’s release; only later do they fall back down to earth. See The Dark Knight‘s brief reign at the #1 spot as an example of this phenomenon.)

So what do these numbers tell us? Not much in isolation. The average score across these seven movies is 6.51 out of 10, which at first may seem pretty bad, but in reality is fairly respectable for action movies. Con Air, which few would call a complete stinker, clocks in at 6.6.

Now for the real test. If Michael Bay is such a bad director, how does he fare against some of the greatest directors of all time?

Surprisingly well, it turns out. I compared Bay’s “first seven” rating with those of five directors that are often regarded as “great” (based on their presence on various “greatest directors” lists that I googled)–Steven Spielberg, Stanley Kubrick, Martin Scorcese, Francis Ford Coppola, Orson Welles–and Bay isn’t too far off their pace: 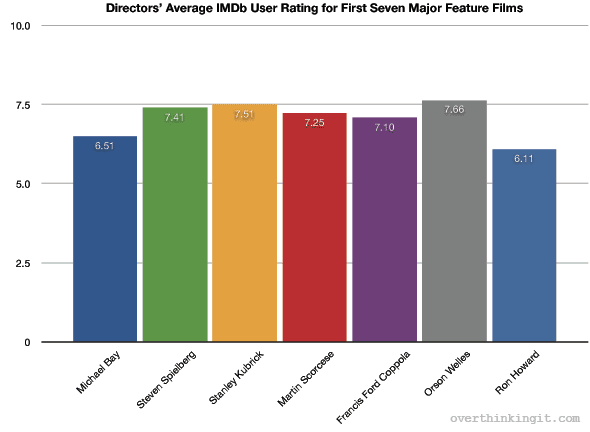 Keep in mind that all of these directors have some serious classics within their first seven features: Raiders of the Lost Ark, Raging Bull, and The Godfather all are part of these statistics. Even so, Michael Bay’s “first seven” average score of 6.51 is only 13 % off from these five “great” directors’ combined average of 7.46. That’s roughly the difference between the aforementioned and totally respectable Con Air (6.6) and the slightly more respectable Star Trek: First Contact (7.6).

But who’s this at the end? Yes, that’s Ron Howard, as in Academy Award Winner Ron Howard. His combined average score across his first seven major features is a paltry 6.11. Michael Bay’s “first seven,” at 6.51, comes out slightly ahead. Ouch. 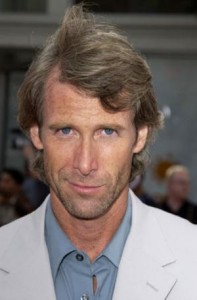 Does this mean that Michael Bay is a better director than Ron Howard, at least after seven films, and is only slightly removed from the likes of film gods Kubrick and Scorcese? Not necessarily. All this proves is that thousands (if not millions) of IMDb users have chosen to rate Bay’s work at a fairly high level, by whatever standards they so choose.

This is not necessarily in conflict with the “Michael Bay Sucks” mantra that echoes through the blogosphere these days:

Does Michael Bay make thought-provoking action movies along the lines of The Dark Knight?
No.

Is Transformers: Revenge of the Fallen an excruciatingly long explosionfest with an incomprehensible plot?
Probably.

By these standards, sure, Michael Bay sucks. But he’s cleary doing something right, by some standard, to get IMDb votes in the 6 to 7 range (and ticket sales in the $500-700 quadrazillion range). In other words, more than enough people get some sort of satisfaction from Michael Bay movies and express that satisfaction through their ratings to elevate Michael Bay’s body of work above the true abyss of worthless cinema.

I know there’s plenty of room for debate on IMDb ratings, Michael Bay, and my methodology. Take a look at the rest of the raw data, draw your own conclusions, and sound off in the comments!