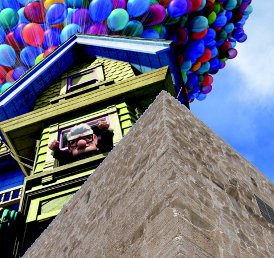 I can see my house from here!

Which brings us back to the pinnacle. The first pinnacle is Paradise Falls, where Carl puts his marriage to rest, in the ultimate act of fidelity to the dreams and memory of his beloved wife and the meaning that adventuring had in their lives. It is a lovely touch that, even when he must leave, released from his oath by completion and by Ellie’s book, his and Ellie’s chairs spill out of the house and stand on the cliffside in tribute to the value of their loyalty and love for one another.

But there is a second pinnacle in the story – a second time that the ultimate Milton act of fidelity and consonance with the religious duty to our pre-lapsarian (before the Fall of Man) forebears: “They also serve who only stand and waite.” (Sonnet XVI)

There was a great quote, something really dramatic Carl said, or maybe it was Russell, when the two of them were on the pinnacle. Oh, right:

And the pinnacle was Russell’s favorite curb. The task of standing on that curb becomes a form of duty, gives Carl something to do in his waning years, and helps restore something Russell never knew he loved. From that pinnacle is where Carl and Russell, hand in hand, with wandering steps and slow, through that sort of Eden, took their solitary way.

Tell me this doesn’t remind you of the (rather shocking) zeppelin-related death of Up antagonist Charles Muntz: 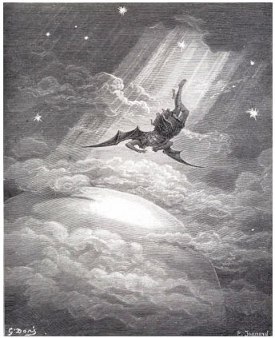 I wonder what Satan puts on his album covers?

“Satan, smitten with amazement, fell.
As when Earth’s son, Antaeus (to compare
Small things with greatest), in Irassa strove
With Jove’s Alcides, and, oft foiled, still rose,
Receiving from his mother Earth new strength,
Fresh from his fall, and fiercer grapple joined,
Throttled at length in the air expired and fell,
So, after many a foil, the Tempter proud,
Renewing fresh assaults, amidst his pride
Fell whence he stood to see his victor fall;
And, as that Theban monster that proposed
Her riddle, and him who solved it not devoured,
That once found out and solved, for grief and spite
Cast herself headlong from the Ismenian steep,
So, strook with dread and anguish, fell the Fiend,
And to his crew, that sat consulting, brought
Joyless triumphals of his hoped success,
Ruin, and desperation, and dismay,”

Okay. Maybe that last one was a stretch. 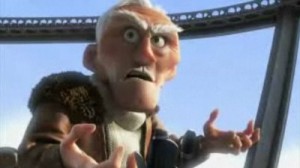 What did I do? Was it the talking dogs?

Special thanks to the Scholar’s Bank at the University of Oregon, who posted the excellent searchable PDFs of Paradise Lost and Paradise Regained that helped me pepper this rambling with the illusory trappings of legitimacy.