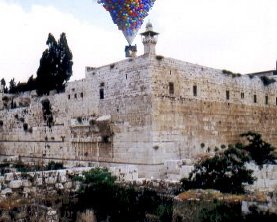 Up 2: Next Year in Jerusalem

“He caught him up, and, without wing
Of hippogrif, bore through the air sublime,
Over the wilderness and o’er the plain,
Till underneath them fair Jerusalem,
The Holy City, lifted high her towers . . .

The kindness of the world toward your existence turns out to be an illusion of youth, and all love dies. Man must keep his faith and promises, even as he ages toward death — find a place to stand firm, even as he falls.

Pixar’s Up and John Milton’s great poems Paradise Lost and Paradise Regained are about more than what they have in common. A laundry list of their similarities would hardly be interesting (especially if you haven’t read the poems). But they meet at a critical and compelling place in what I like to call the Artistic Project.

This balloon is about to get heavy, so if at any point you need a little extra lift, bookmark this.

Now, let us go, hand in hand, with wandering steps and slow, to find our solitary way — 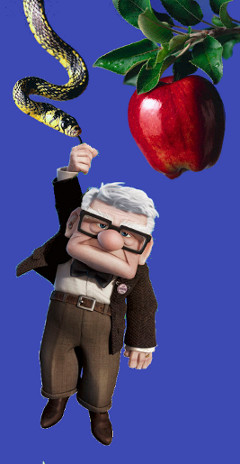 But I should take at least a few paragraphs to substantiate my claim that these works of art are cut from such similar cloth.

Paradise Lost tells the Adam and Eve story, with a lot added about the larger universe and what comes before and afterward — a lonely man finds his perfect woman, his inspiration, and the two fall in love against the backdrop of the immeasurable beauty of the world. Then, the pair fall, are cast out of Eden, and must come to terms with a life where, instead of laying by river banks of Paradise, shagging all day without consequence and gardening at their leisure, they must work for a living in a much more mundane sort of way, free to choose where they find “their place of rest,” but knowing that it’s on the way.

In Reel I of Up, little Carl Fredriksen is a lonely boy brimming with fantasies about adventuring in exotic lands. He meet Ellie – the love of his life, his inspiration – and together they share a passion for the immeasurable beauty of the world. The pair grow up, get married, and must come to terms with a life where, instead of building their house on the crest of a plateau next to exotic Paradises Fall in South America, they must work for a living in a much more mundane sort of way. The couple is childless and Ellie dies before Carl, leaving him little in life but to choose where he’s going to spend his final years.

(This decision is forced when an elderly Carl assaults a construction worker for damaging his mailbox and is remanded to a nursing home by the courts, since it is no longer safe for him to take care of himself, and since developers want his property. By the way, the first part of Up is one of the saddest, saddest things I’ve seen in movies. The Wrestler-caliber sad, except not just for dudes. Big Fish caliber sad, except a lot of people watched it. Everyone was crying.)

In Paradise Regained, a solitary Jesus wanders in the Wilderness, tempted by Satan. In the climactic moment, he is whisked through the air to the very top pinnacle on the temple mount in Jerusalem – a symbolic high point and symbol of divinity. To defy temptation, come into his own and redeem humanity, Jesus must stand on the pinnacle — find his spot high above the ground and remain there faithfully, despite Satan’s attempts to get him to give up or jump off. The standing itself is the fundamental action of the character and the plot – the gestus, if you will.

For the rest of Up, Carl lifts his house with balloons and is whisked away to the Paradise Falls plateau. Landing on the wrong side of it, he must move his house (which he pulls on a tether “like a parade balloon”) to the perfect spot right next to the falls to keep his promise to Ellie and redeem himself. All the while, he is stalked and tempted by his childhood hero, a long-forgotten explorer who casts himself as the adversary, using an army of minions and his own personal influence to try to get Carl to fail. 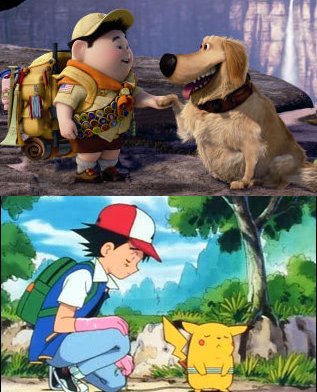 Plagiarism! I Choose You! Plaaaaaaaagiaaaarism!!!

Then, the plot switches gears and starts closely resembling Pokemon the Movie 2000 (a movie I reference far too often on OTI). There’s a little Asian kid with a baseball cap who goes around collecting badges and talking about what an awesome so-and-so he is, and a really stupid yellow animal who has a lot of affection for our protagonists for no reason, and they need to fight an evil imperialistic guy in an airship because he is trying to steal this big, blue, oddly charismatic sort-of-flying creature – the rarest of all the Pokemon, er, birds.

So, yeah, laundry list plot comparisons leave something to be desired. Let’s leave that one where it lies. I’m not writing this just to talk about plot. The thematic and normative similarities between the works and the common purposes to which they speak are much more interesting.

I’m getting better! I think I’ll go for a walk!

“Why comes not Death,
Said hee, with one thrice acceptable stroke
To end me? Shall Truth fail to keep her word,
Justice Divine not hast’n to be just?
But Death comes not at call, Justice Divine
Mends not her slowest pace for prayers or cries.”

It’s pretty clear that Carl Fredricksen flies to Paradise Falls to bury his wife and find his own grave. He has some food, sure, but no real plan to get more. He doesn’t even have a place set aside for pooping. He commits to this course of action thoroughly, and asks no one for pity. He never once bemoans being old. He never once in the movie expresses regret or frustration with his physical deterioration.

(Which, of course, turns out to have been less than complete – which I thought was pretty awesome. Old people are so often portrayed as frail – far more often and far more delicately than they are in real life. Of course, they no more have super powers than regular people do, but with cartoons, as with retirement planning, one must adjust for inflation).

What does he expect to have happen when he gets there? What happens in the picture, presumably – the house sits on the falls, and he gets to be with his wife.

But then, a funny thing happened. He didn’t die. More than his sense of righteousness, more than his fondness for Russell (on which more later), more than his love of adventure, and certainly more than his affection for birds or the environment, which he actively dislikes, Carl’s limited enthusiasm for doing things often seems to come from the fact that he is not yet dead. 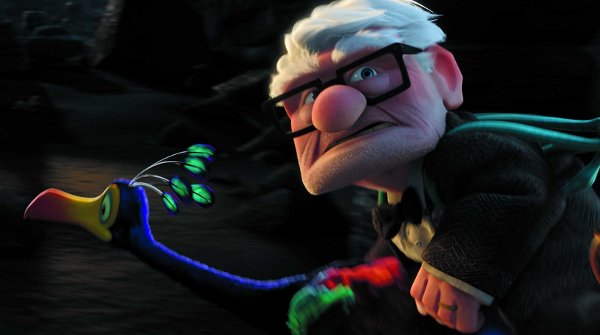 Carl doesn't like random encounters. That's why he rides a chocobo.

Normally, that would be a pretty crappy motivation for a story that almost never gets used – and that’s deeply ironic, because it is one of the chief motivations that adults have for doing things in their actual lives. There is a huge gap here between what is good for stories and what is true about life, and I think one of Up’s chief virtues is that, like Paradise Lost, it doesn’t shirk away from facing this gap and traversing it – while remaining a good story.