“Die hee or Justice must; unless for him
Som other able, and as willing, pay
The rigid satisfaction, death for death.” 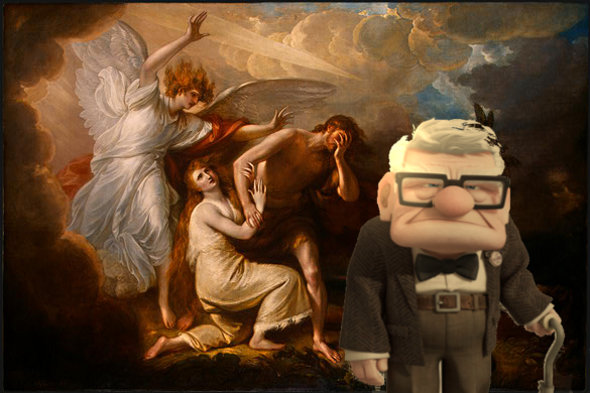 When Carl Fredrickson is about to be hauled away by the orderlies to the Shady Oaks retirement community (or whatever adjective/tree it was), it forces key questions in his life. He has delayed dealing with them for some time.

No, when asked “What now?” His answer is not “Be young, have fun, drink Pepsi,” as the marketing might lead you to believe. It is decidedly more old-fashioned.

When Carl is forced to take drastic action during a rather pointless time in his life, he decides to keep his word.

And later, when he agrees to help Russell save Kevin the bird, he really doesn’t give a rat’s ass about the bird. He hates the bird, and he doesn’t like Russell very much. But, in a moment of sympathy, he makes a promise, and he decides that this promise means something.

(Notably, he does not act on his promise to Russell until he has fulfilled his promise to Ellie. It seems terribly insensitive, but it makes sense in the context of how Carl operates. The house needs to stand next to Paradise Falls, as in Ellie’s picture, before Carl can serve any other promise. It’s almost a cosmic law to him.) 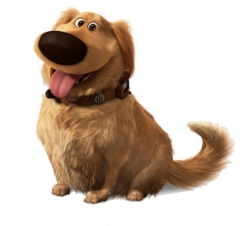 I was made on the Sixth Day! SQUIRREL!!

One of Carl’s most important personal moments is when he accepts Masterhood of Doug the dog (another callback to Adam – who was given dominion over the animals). Bonds and duties matter.

Later still, when Russell’s father does not show up to his Senior Wilderness Explorer ceremony, Carl goes – and I really think it is for a similar reason. Carl believes in promises. He believes in duty. He values loyalty and takes it almost as a natural law that certain people ought to be loyal to certain other people. He uses this truism, this thing he intuitively understands but which doesn’t entirely make sense discursively, to supplant the place of a “point” in his life.

And his attitude toward duty is Miltonic. When he does something in service to a promise or oath, it is not through subordination to a binding tie – trust for Carl is a monistic relationship, where the act of promising to do something for someone else and accepting someone else’s promise to do something for you (as Carl does when he lets Russell “assist the elderly” to get his merit badge) are the same sort of feeding.

The “up” in Up becomes an aspiration and drive toward this commitment, this trust, even when, in the larger context of his life, it is pretty pointless.

All because he crossed his heart.

But even that is too dialectical an explanation! Who is the giver of trust? Who is the receiver of trust? Why is the heart crossed – does this not run in the interests of the heart as well? Perhaps not. The moments are delicately and subtly handled – best to watch the movie again, and really listen and watch for the details, especially for what Carl does not say or do that would be clear givens for other characters.

And I would resist saying that Carl “makes it the point of his life” – supplant the place of,  sure, but in a different way. Carl doesn’t find meaning to fight the meaninglessness. This is too dialectical, at least within a certain common-sensical paradigm. As in the Milton quotation above, Justice is just something that needs to be done.

That Milton quotation at the top of the page, by the way, is about how even God the Father Himself observes the pressing necessity of Justice, without seeing it as a limitation or bind on Him. He does not observe those sorts of dialectical relationships and instead lives in a divine cycle of feeding and vaporizing, of spiritual physicality, of constant and cosmic mutuality, where something like Justice can just exist and be good without having to operate along a subject-object axis.

And by the way, if you have any doubt that the main reason Carl helps Russell is because he crossed his heart and promised to do it – or that this faithfulness is the primary virtue exhibited in the story, the screenwriters left you this fun bit of foreshadowing at the moment of Russell’s introduction: 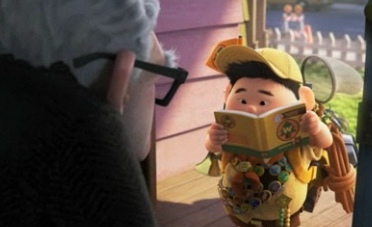