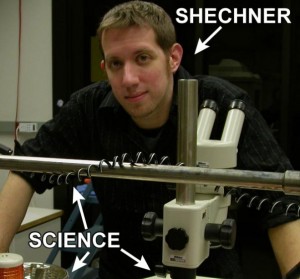 Against the advice of some, and as many of you may know, I gladly (if not always ably) serve as the Overthinking It staff scientist™.  It’s an odd amalgam of roles, requiring mostly that I be at-the-ready if one of my fellow overthinkers needs a formula derived, has questions about standard units of measurement, or if something they took a pill for keeps on doing its thing for more time than they wanted/expected it to.

(I’m talking about erections, there.)

On rare occasion, though, I also get the chance to directly OverThink an aspect of Science in the popular culture.  The last time I did this for any serious length, actually, one of you responded to it by trying to debunk Einstein’s General Theory of Relativity.

We in the Scientific community hope you get the help you so desperately deserve, Joe Nahhas, anonymous OTI reader.*

Still, if nothing else this may serve as some general indicator of a demand for sciency-type-stuff on our humble website.  Now, said sciencey-goop finds its way into our popular milieu through more venues than that most obvious route of Science Fiction.  As has been beautifully enumerated elsewhere, action movies are particularly adept at taking the kinds of “liberties” with Physics (both stunt- and plot-based) that can only be considered awe-inspiring.  But beyond that, arguably any cultural element for which characters, say, depend on some trendy (if not fictional) electronic devices, or suffer from/receive medical care for a fictional (if not trendy) ailment, evokes the Specter of Science in that work.  Not to mention those pop culture artifacts that, though not ostensibly about science, per se, feature a character who’s a scientist… 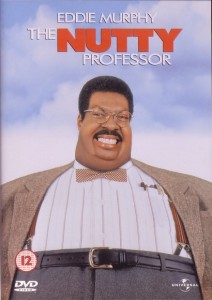 This isn't helping things... for anyone.

The thing is, I have my favorite examples of where Pop Culture gets it right, (and wrong), but listening to me gripe about it isn’t much fun, is it?  It’s time to crowd-source it.

SO, dear OTI readers, I’d like you to chime in on a semi-regular piece I’ll write called “Ask A Scientist.”  I’d title it something more creative, but it takes enough self-restraint for me not publish these posts with an abstract and Materials/Methods section.  We’ll worry about the nuances of “clever titles,” “word order,” and “not using swear words to describe other peoples’ work in print” later.

Let’s get the ball rolling.  Got something you’ve seen on TV, in a movie that makes you think, “Is that really how that would work?”  or, “there’s no way a platypus could survive that!” or “can you really tell if it’s human DNA just by looking at a cartoon of it?”**  Sound off in the comments.  Or, you can always send me an email at [email protected] shechner at overthinkingit dot com with your questions/observations regarding science in the popular media.

Extremely lucky ones will get a T-shirt bearing the likeness of Mr. Peter Fenzel.

And of course, members of the OTI writing staff, or its parent corporation are eligible to enter, and are encouraged to do so.

9 Comments on “Ask A Scientist (About Pop Culture): Call for Submissions”