Like all good geeks, I have a soft spot for Superman II. Today I want to overthink one scene in particular… and surprisingly, it does not feature the line “Kneel before Zod.”

Early in the film, Lois and Clark are on assignment at Niagara Falls. A little kid is playing on an observation platform, and his grip suddenly slips. He falls off the Falls… and falls… and falls…

So here’s my question: how far would a child really fall in 28.4 seconds?

Well, figuring out how far something falls in a vacuum is pretty easy:

Here on Earth, “acceleration due to gravity” is about 9.8 m/s2. So let’s plug in our numbers.

So according to Superman II, Niagara Falls is 2.46 miles tall (plus like 20 feet, since Superman catches the kid a little above the water).

Hahaha! Let’s all enjoy a good laugh at that! That is WAAAY taller than any real waterfall!

Unfortunately, we don’t live in a vacuum. Which makes that number completely worthless. To find the REAL height of Super Niagara, we have to account for air resistance.

And this, I’m afraid, is where the pain begins. As far as I can tell, there’s no formula on the internet for “distance a little boy falls in a given length of time,” so I derived the equation myself. And by “derived,” I mean “emailed a couple of brilliant friends and had them figure this out for me.” I myself spent most of AP Math playing Drug Wars on my TI-82 (which was totally worth it). So I’d like to thank David Shechner and Emily Neubauer for dropping some science on me.

Warning: the math that follows will seem a lot more interesting if you listen to this while you read:

If you’re traveling at a constant velocity, then the basic equation for distance is:

But that only works if velocity is constant. If you’re gradually putting the pedal to the metal as you listen to Appetite for Destruction, Figure 2 doesn’t apply.

However, there is another way to express Figure 2, which allows for velocity to be an equation. It’s called an Integral:

A brief review of what Integrals are. Take the example of the accelerating car again. 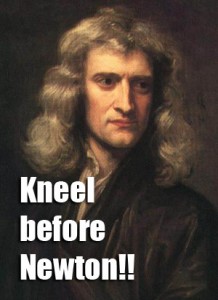 Imagine you record the car’s speed every minute, and then later use those measurements to estimate your total distance. You’d maybe be in the ballpark.

Now imagine recording your speed every second. Obviously, you’d get a lot closer to the real distance that way.

An Integral allows you to subdivide your car trip into an infinite number of pieces and add up the distance traveled during each of those slivers. That’s Calculus, and it’s why I majored in Humanities and fulfilled my science requirement by taking “Science Fiction/Science Fact.”

So what we need to get started is an equation that tells us how fast the kid is falling at any point in time. And luckily enough, Wikipedia has it for us here, about halfway down the page:

Don’t panic. Deep breaths. We will get through this.

First, what the hell do all these letters mean:

m = mass of the falling object

I’m going to guess that the kid weighs about 70 pounds, which is about 32 kg in science talk.

Air density varies depending on the temperature. Assuming it’s a pleasant 68 degrees (20 Celsius in science talk), than P is about 1.2 kg/m3.

A = surface area of falling object

What, exactly, is the surface area of a kid tumbling through the air? Well, let’s assume he’s four feet tall and a foot wide, and he’s sort of spread out as he falls… I’m very roughly estimating .4 meters. You wanna argue, that’s what the comments are for.

This is a measurement of how aerodynamic something is, and there’s no way to calculate it without building a wind tunnel or spending four sexless years at CalTech. This page says the drag coefficient of a skydiver is about 1. Let’s go with that, because it’s my favorite number to do math with.

“Tanh,” by the way, is short for “hyperbolic tangent.” I don’t really know what it is, but I do know there’s a button on my calculator that says “tanh,” so I can solve it.

Let’s test out the velocity equation in Figure 4 with the numbers we just picked out. The results are the red curve on this pretty graph (yes, I used Superman colors on purpose). 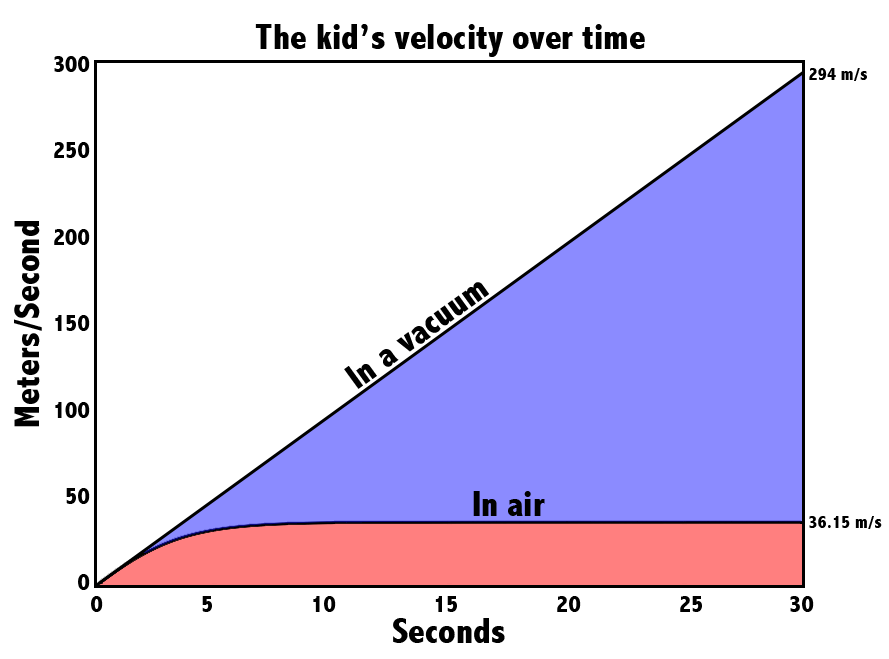 The straight diagonal line is what happens to the kid’s speed when he falls in a vacuum. He just keeps accelerating, which sucks for him, but luckily the vacuum has already killed him. 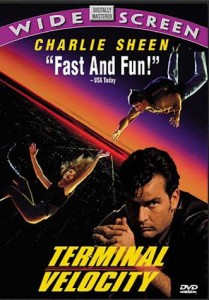 In the air, it’s a different story. After about ten seconds, he reaches terminal velocity. That’s when the force of gravity is equal to the force it takes to push all that air out of the way. He’s still falling – he’s just not speeding up anymore. It seems like for this kid, terminal velocity is around 36.15 m/s, aka 81 mph.

But let’s keep our eyes on the prize – we’re trying to find the DISTANCE the kid falls in 28.4 seconds, not the speed he’s traveling at the end of it. So let’s plug Figure 4 (velocity equation) into Figure 3 (Integral for distance).

That’s technically the equation we’re looking for. But we’re not quite ready to plug our numbers in yet. Before our Integral can be solved, it has to be simplified (“simplified” is relative here).

See that first square root in the Integral, before “tanh”? Well, that’s a constant, actually. None of those variables change (it’s not like the kid is getting fatter while he falls). And a constant can be moved outside the Integral (trust me on that). So we get the tidier:

And when I consult my handy Integral Chart, which I keep by my bedside at all times in case of emergency, I find this:

More fun letters! “Ln” means “natural logarithm.” That’s another button on your calculator you don’t have to know the meaning of to solve this. Ditto “cosh” (“hyperbolic cosine”). Those vertical lines at the end mean “absolute value.” As in, “Hey, if the number inside these lines turns out to be negative, just pretend it’s positive, mmkay?”

The “whatever” is a constant that multiplies the variable inside the Integral. And if you take a peek back at Figure 7, you’ll see that in this case…

Alrighty then. We’re ready to un-Integral our Integral, by applying Figure 8 to Figure 7. Brace yourself – it ain’t pretty:

Then again, maybe it is pretty. Because once you simply those first couple of terms, you have what we’ve been dreaming of. Ladies and gentlemen, I present to you, for the first time on the internet… 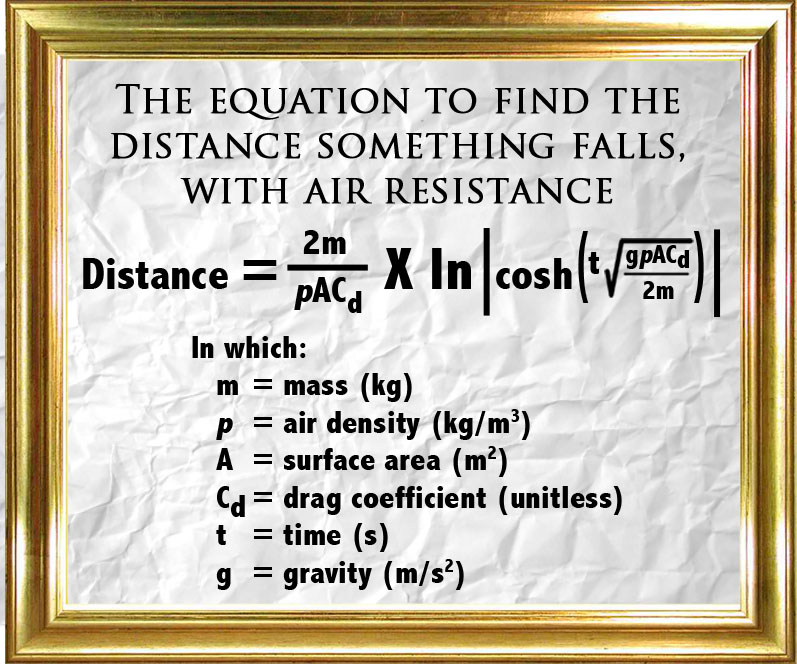 Now, all we have to do is add the numbers and crunch ’em.

Not nearly as large as the first number we came up with waaaaaay back at the top of this page. But pretty darn tall. According to (man, I can’t believe this exists) the World Waterfall Database, the highest single drop from a real waterfall is 2,648 feet, off Angel Falls in Venezuela. 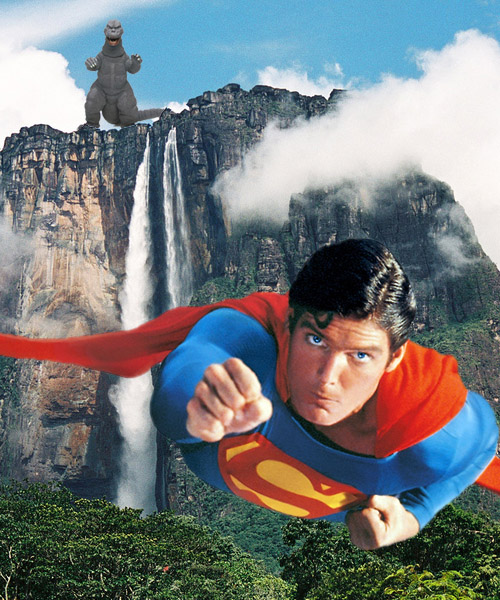 43 Comments on “The Math of Steel”