Usually when a commercial makes me spit coffee all over my laptop, it’s because I find something hilarious or disturbing about the subtext.  This one is less subtle.

Not that there aren’t questions.  Are we supposed to think that their hair product is a turd?  A… a marital aid of some kind?

Playing the video back and freeze-framing it, it becomes clear that the vent in the kangaroo costume is on the stomach, not between the legs, which means it’s the pouch, not the vagina or anus.  That answers the question of what the product is supposed to be (it’s a baby kangaroo, or “joey”), and also the question of how the hell it got past the censors.  But it raises another question.  Why did I *think* it was a vagina to begin with?  I do not have a dirty mind!  Shut up!  You shut up!

[For a shot-by-shot analysis of why Stokes thought it was a vagina, click and read on.]

A lot of it has to do with the way the commercial is shot and edited.  In the ten seconds between the start of the commercial and the moment of ejection, we get ten different shots. 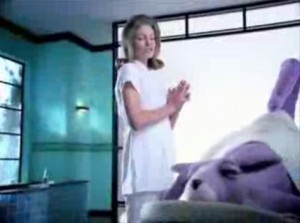 We start in a medium-long shot, looking at the kangaroo more or less head on. 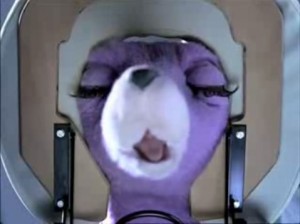 Next, we cut to a close up of the kangaroo's face settling into the massage table, 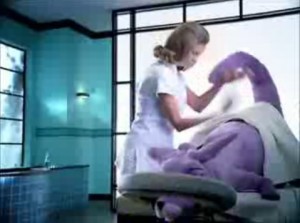 then back to the medium-long shot. The Kangaroo's head is still in the table, but repositioned so that she's still kind of looking at us, 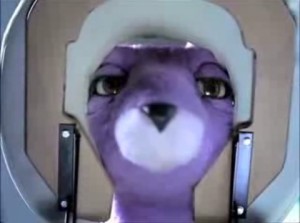 and then repositioned again so that we're still head-on when we cut back to the close up. 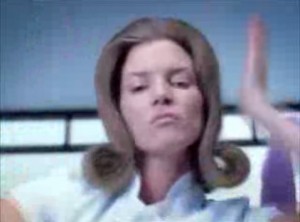 Cut from the kangaroo's face to the masseur's face, from that same frontal angle. This one is kind of important. 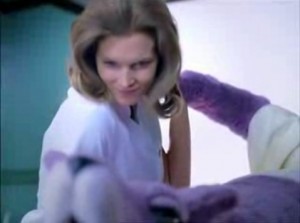 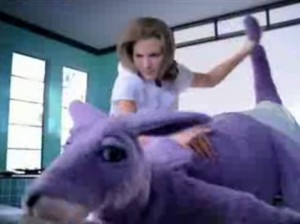 This next shot is so short as to be almost subliminal. (One assumes that the abrupt cut is supposed to convey the force of the tail-yank.) The angle of the kangaroo is a little off here, but she's still more or less facing us, and the shot is really too fast to process. 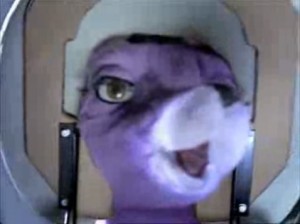 Then we go back to the close up shot. The kangaroo's head is pushed almost all the way through the table: a symbolic birthing of sorts? 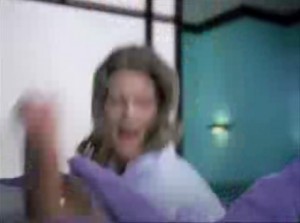 This is the really interesting one. Here we see the masseuse delivering the people's elbow to some as-yet-undetermined portion of the kangaroo's anatomy. Her body is in profile but her face is still turned flat front. Since the earlier cut between the two close-ups has "trained" us to associate her face with the kangaroo's face, we're inclined to think that the kangaroo is also facing us. (She totally isn't, btw.) 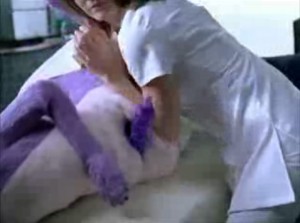 And there you go. Honi soit qui yoni y pense.

So what’s going on here?  A few things conspire to make this last shot ambiguously filthy.  First of all, they could have set it up so that the kangaroo’s head was in frame, eliminating all possibility of misinterpretation.  They didn’t.  Second, the limb in the shot is actually her elbow and forearm, but it could quite easily be mistaken for her ankle and elongated foot (making the thick white and purple thing it’s resting on her thigh, instead of her torso).  Third, in all the shots of the kangaroo’s body that we’ve seen so far, the only white that’s been visible has been somewhere around her pelvis.  (Closer examination reveals that it’s a massage towel, but these shots have been on average one second long:  not enough time for a close examination.)  Finally, the constant frontal shots of the kangaroo and the masseuse have us expecting a camera angle somewhere on this axis: 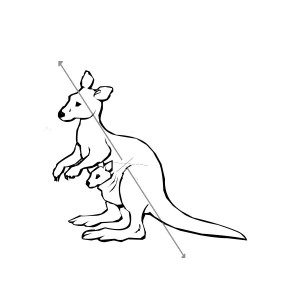 Combine that with the color thing, the vaguely sexual subtext of massage, and our anthropocentric tendency to assume that mammals have only three major orifices, NOT TO MENTION the rather unfortunate way that the ejection process stretches the fabric of the costume, and I think we can be forgiven for making a mons out of a molehill.  Youtube user richfofo, who applies the Potter Stewart doctrine to fursuit genetalia, deserves to have the last word.