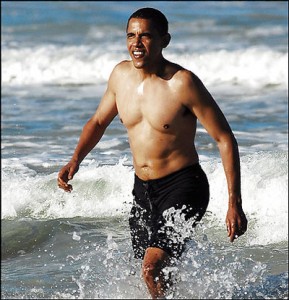 And it’s not even *good* fanfic.   Obama and Palin are Mary Sues, the pair of them.

Let me be clear: Obama and Palin, the human beings, are as complex and irreducible as any other human beings.  But Obama and Palin, the candidates, are wholly illusory creations shaped by their respective party machines and depictions in the media, and are only similar to the humans that share their names in so far as it is expedient.  In short, they are fictional, and as such, they are subject to literary criticism of the particularly snarky kind that flourishes in the blogosphere.

So I ran them through a  Mary Sue test (there are many of these, which you can find using google – I chose this one).  I’ll admit that I was a little generous in some of my criteria…  “Is he/she from a country or world different from the other characters in the story?” Alaska, check.  Hawaii check.  “Does she have special/magical powers that none of the other characters have?”  Can field dress a moose, check.  Anyway, here’s the feedback the test gave me for Obama.

“Barack Obama is suspiciously similar to you as you’d like to be. He may be popular, or he may not, but no matter what he’s impossible to ignore; he stands out… just the way you always wanted to. He may have sometimes thought that he was special, or destined for greater things… He’s come in for his share of hurt, but gotten off with minor damage. And you’ve been pretty kind to him, always ready to intercede on his behalf and give him a nice easy victory.

“You may have let yourself get a little too close to Barack Obama. Maybe he’s you as you wish you were, or maybe you’re just afraid no one will like him and are trying to give him a free ride. Have some confidence in your writing! Barack Obama is a good character. Give him room to be himself before you stifle him.”

(Palin’s feedback is essentially identical, assuming you fill it out while pretending to be the kind of voter she’s supposed to appeal to.)

One Comment on “Political coverage no longer exists. Instead, we have electoral process fanfic”