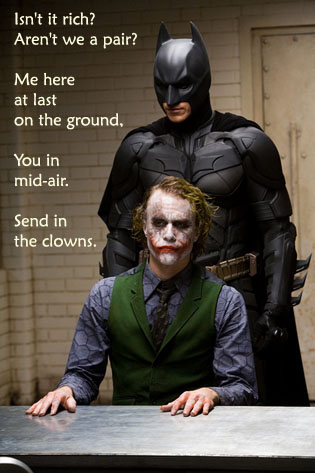 The “Agent of Chaos”

I love how the Joker in The Dark Knight doesn’t do that. The second time he explains his scars (and the second explanation is totally different from the first one) is one of my favorite moments in the movie.

Which is why I don’t really take the Joker at his word when he says he’s an “agent of chaos.”

As one of my friends said it better than I could – “For an agent of chaos, he’s awfully well-organized.”

I think he’s speaking to an important point — that, as far as guys like Batman are concerned, with their vision of the world, their own representations to build, their own will-to-life to conduct, the Joker is a destroyer. He just comes in and annihilates power structures, institutions, and, perhaps with the most pleasure, the psyches of people who consider themselves to be righteous and in control — people who feel the are successfully projecting their own version of the Will into the world.

I really don’t think he’s anybody else’s agent. There’s nobody “causing” the Joker, and no principle, not even chaos, no Ra’s Al Ghul, no thing-in-itself that pushes the Joker to do the things he does. There’s something made in the movie about how the mobsters “set him loose,” but that’s kind of forced overplotting and I don’t buy it. The key to the motive behind every Batman villain is how everything they do is somehow thematically connected with their own expression of self. It’s not just good enough to kill somebody. You’ve got to Joker-kill them.

The Will-to-Joker is part of the Joker. It’s in there under the makeup, underneath the custom clothes. But it’s also in the makeup and the custom clothes. The thing that keeps him going and makes him tick is indistinguishable from what he is. And it is so strong that as an aspect of himself, this WIll projects quite a mighty Representation. The Joker costume is the Joker. So is the trick with the boats. So is the trick with the hostages. So is his insulting the guard’s friends until he beats them (how’s that for a scene about the Will-to-Life?). It’s all his trademark, it’s all the same Will in the world. 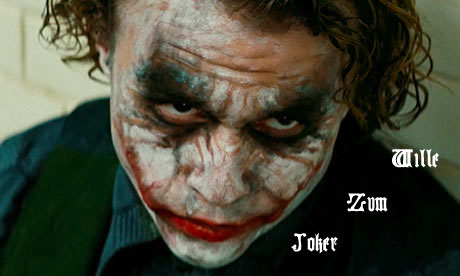 The Joker is the heightened, perfect Schopenhauerian warrior (which is somewhat of a contradiction, but bear with me). The Will-to-Life is unfettered in him to so great a degree that he reimagines everyone and everything around him as projections of himself. Each bomb, each prank, each murder is an act, not of achievement, but of reproduction. The Nietzschean Dichotomy of the Dionesian and the Appollonian is nowhere to be found — he’s all bound up in one agent.

And when he sees Batman, he instantly recognizes somebody like himself. “You’re not like the others,” he says. He gleeful exclaims that Batman is “Like me!”

And this is the villain Batman must strive against to prove his heroism and establish an epic for Gotham.

Episode 647: Look at the Board