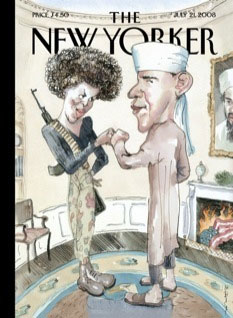 There’s a mid-to-large sized kerfuffle brewing over Barry Blitt’s cover art for the latest New Yorker (at left).  As you can see, it shows a caricature of Barack Obama exchanging a “terrorist fist jab” with his wife in the oval office.  His outfit is vaguely Muslim, hers is Sandinista chic (or possibly Black Panther chic).  A picture of Osama Bin Laden hangs on the wall, and the American flag burns in the fireplace.  Subtle it ain’t.

But it’s hard for me to understand why people find this picture offensive.   If I was a right-wing smearmonger, I suppose might be less than pleased with the cartoon’s message (basically, “You guys are dicks”).  But most of the outrage seems to be coming from liberals.   Do they think that the New Yorker is honestly suggesting that this is what an Obama presidency would look like?  Honestly, the New Yorker? A magazine whose editorial slant is two, maybe three steps to the right of Mother Jones?  A magazine, furthermore, as famous for its cartoons as for its liberal slant?  Come on now.  The title of the picture is  “The Politics of Fear,” and while you wouldn’t know that from looking at the cover, the message is still painfully obvious.  Maybe it needs a caption (sort of like the one in that one South Park episode) that says “THIS IS WHAT THE REPUBLICAN SMEAR MACHINE IS ACTUALLY TELLING PEOPLE.”*

But actually, most of the people complaining about this do seem to understand that it’s a joke.  They’re just worried that Joe Six-Pack McVotesalot is going to be too dumb to understand the subtext; an attitude I find both depressing and vaguely insulting.  Others have more generalized complaints:  a spokesman for the Obama campaign just called the thing tasteless and unfunny.  (This is probably to be expected:  political campaigns aren’t really allowed to find anything funny.)  Obama himself  has said that the cover is obviously protected by our right to free speech, but might be offensive to Muslim Americans.  There’s a kernel of truth to this.  It is offensive when people accuse Obama of being a Muslim as if it was a horrible thing.  It’s also offensive when people rush to defend him from the pernicious charge of Muslimhood.  It’s particularly offensive when Obama’s campaign prevents two women wearing hijabs from being photographed with Obama at a ralley. (Thankfully, as the link indicates, Obama has apologized long and hard for this last.) Still, it’s hard for me to see where this picture goes over the line.  Yes, it’s a fairly grim piece of satire, but it’s well within the bounds of what’s appropriate.  Look, people ARE making these claims – not just that Obama is a Muslim, but that he’s a radical Muslim, that he’s soft on terror, and that his wife is a dangerous Marxist.  Are we supposed to ignore that, and hope they’ll shut up before the election?  Are we supposed to engage them in intelligent debate, as if they deserve to be taken seriously?  Mockery is the only sensible response to this insanity; mockery is what the cover delivers.

Or am I off base?  Flame me in the comments if you disagree.

Slate, by the way, has some very good tangentially related stuff.  1:  Where the phrase “terrorist fist-jab” might have actually come from.  2:  The body language terrorists actually use to greet eachother.

23/6 has an excellent and comprehensive guide to moral outrage over the New Yorker cover.

* Except for the flag burning.**