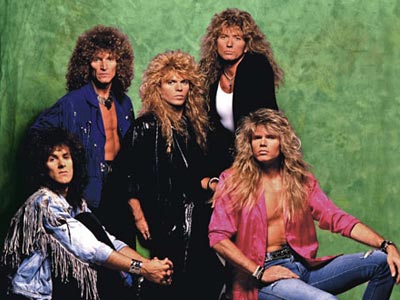 Until recently, I only really thought of the archtypical 80s metal band Whitesnake as a punch line. If pressed, I guess I could have sung through the chorus of “Here I Go Again On My Own Again,” but I wouldn’t have actually known that it was a Whitesnake song. Which is shameful, really. But that all changed the other day, when I sat down and watched a whole bunch of Whitesnake videos on youtube. It was a bruising and confounding experience (The hairspray! The fog machines! The horror!), and it may have weakened my grip on reality. But as the grueling marathon came to a close, I arrived at the following conclusion.

Video and seriously, seriously overthought analysis after the jump.

Of course, some of you may have about the same knowledge of Whitesnake that I did, back in my callow youth. So here’s a quick breakdown. Whitesnake looks like

But their lineup tended to shift around a lot, and really, the band was the product of one man’s imagination. That one man is the lead singer, Dave Coverdale, who looks like 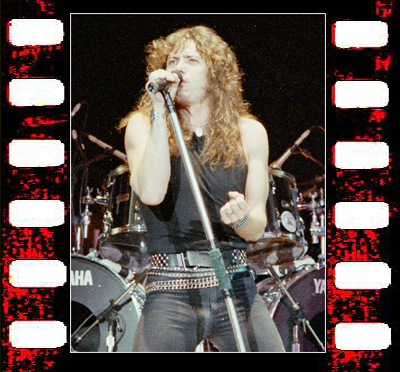 That should give you some context. Now watch the video for Whitesnake’s “Still of the Night,” which you’ll be sad to learn is a TOTALLY different song then the Boyz II Men version.

And yes, that is Tawny Kitaen writhing around the screen and eventually getting dragged away by the “sex police” at the end there. She starred in, like, five or six of Whitesnake’s videos. More on that later.

First things first: it’s very instructive to listen to this song next to its obvious model (to my ears, anyway), Led Zeppelin’s “Black Dog,” which can be heard here. It’s a very similar riff and vocal, right? But the Whitesnake version is a lot more square, both on the surface and in deeper structures such as phrase length. That might help explain why Led Zeppelin, not Whitesnake, is Led the fuck Zeppelin. But I’m not here to talk about Zep. I’m here to talk about why Whitesnake is Whitesnake, which, if not quite as awesome, is still no mean feat.

I might as well cop to the fact that I started watching these videos because of an essay that I read by the feminist musicologist Susan McClary. McClary is kind of an interesting figure, and one of the few musicologists to make even a tiny blip on the wider cultural radar. She’s famous (well, for a musicologist) for the following statement about Beethoven:

The point of recapitulation in the first movement of the Ninth [symphony] is one of the most horrifying moments in music, as the carefully prepared cadence is frustrated, damming up energy which finally explodes in the throttling murderous rage of a rapist incapable of attaining release.

When she dropped that bomb in the late 80s, it was briefly fashionable, even outside of academic circles, to rake her over the coals for taking feminist criticism too far. Which in all fairness, she probably did. But I’d like to speak up in defense of McClary for a minute. Sure, there’s something laughable about claiming that Beethoven wrote a rape into one of his symphonies. But, whether you agree with her or not, listening to Beethoven’s 9th after reading her description is more interesting than it was before. And something similar happens with her description of Whitesnake. Her basic point in this case is that, for cock-rock bands such as Whitesnake, women and the “feminine” are construed as harmful contaminants that need to be constrained or destroyed. Check out this description of “Still of the Night”:

In “Still of the Night,” the threat [of the feminine] is more intense, both musically and theatrically. At the end of the first verse (on the words “in the still of the night”), Coverdale strains upwards – both vocally and physically, as though in orgasm – to hold onto the sixth degree, before returning decisively to tonic control. The second time through, however, both the heroic Coverdale and the harmony get trapped for what seems an interminable duration in that position which has been so carefully defined as that of desire. [That is, again, of the “feminine”]

I should mention here that scale degree six (that’s “La, the note that’s after Sol,” in layman’s terms) does have well established connotations of weakness, and thus “femininity,” within music scholarship; also, scale degree one is thought of as strong, and thus “manly” (despite of the fact that The Sound Of Music characterizes it as “Doe, a deer, a female deer”). So McClary’s not totally off-base here. In any case, what she’s talking about is that moment about two minutes into the song where the bottom drops out and the synth choir comes in. It’s not stretching it THAT much to claim that the music here sounds more feminine, even if you leave scale degree six out of it. McClary goes on:

The energy drains away, the musical and physical gestures mime impotence, and Kitaen struts about striking menacing poses. For a long time, there seems to be no possibility of escape or return. When the musical energy finally manages to extricate itself from the abyss, the rest of the piece is concerned with attempting violently to purge the contaminating element.

And here, I think she’s totally wrong. First of all, the middle part of this song isn’t a contaminant. It’s a little too… oh, I don’t know… AWESOME? With the vibraphone, and the choir, and the, the fucking violin bow on the guitar, there? And then there’s the rock-out at 3:57, which, while still clearly part of the “feminine” interlude, is also clearly the best part of the song. What’s more, when the “masculine” beginning section does come back (at 4:35 into the song), it doesn’t appear the way that it did at the beginning. Aspects of the middle section keep interjecting themselves – in an awesome way, not a contaminating way – and eventually the song fades out on a coda that’s pretty much a 50-50 split between the two sections. If you wanted to use some narrative model to explain the music, it would make more sense to see the “heroic Coverdale” as a sort of Prometheus in tight pants, venturing into the uncanny “feminine” territory of the song’s middle section in order to retrieve the spark of rock-n’-roll fire (with his mic stand serving as the stalk of fennel, naturally), which he then shares with the rest of the band, redeeming the song’s over-masculine opening.

It’s also interesting that just before the “rock-out” starts (at about 3:54), the video has a shot of Kitaen lip-synching to Coverdale’s vocals. It’s a pretty jarring visual, and one that demands explanation. In all of her appearances in the Whitesnake videos, Kitaen only ever interacts with Coverdale. The rest of the band members only appear as musicians onstage, and this concert footage is then cut back and forth with a loose narrative starring Kitaen and Coverdale (and sometimes just Kitaen). Although I think they pull that trick where she lip synchs to the song only one other time (in “Here I Go Again on My Own”), there’s often a sense that the song is telling her story just as much as it is telling the story of Coverdale’s reaction to her. And consider how similar her hair and outfits are to Coverdale’s own! I used to think that was just a funny thing about hair-metal fashion, but now I wonder if it’s not a conscious choice. Who does the narrative voice of the song belong to? Whitesnake? Coverdale? Or Coverdale/Kitaen, hermaphroditic and multi-personed?

I’m guessing McClary wanted her essay to point out how limited Whitesnake’s music is. If so, she failed epically, and I think the reason is that she’s just too good of a storyteller. The narrative descriptions of the music that she comes up with are so compelling that I can’t make myself listen to the song once, think “this music is patriarchal crap,” and discard it. Instead, I always find myself twisting McClary’s narrative just enough for the band (or, you know, Beethoven) to no longer seem so regressive, and then I go and buy their CDs on Amazon. Or I would, if I had any money. You get the picture.