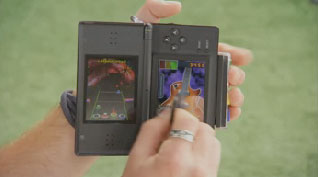 A portable version of Guitar Hero (aptly named “Guitar Hero: On Tour”) will be released this summer. It might seem a little counterintuitive at first. After all, the whole point of Guitar Hero strapping on that fake plastic axe, right? But the trailer has me pretty well convinced. Time, prepare to be wasted.

Hopefully the advanced mode dispenses with the strumming mechanic, though… when your hands are that close together on a real guitar, you aren’t playing with a pick. Video after the jump, as well as a tangentially related music link.

And while we’re on the subject of face-melting solos, check out the surreal piece of audio art that is Santeri Ojala’s Shredded to Pulp. In case you haven’t heard of this before, the basic premise is that Ojala redubs videos like that Eruption clip with his own deeply shitty guitar stylings. This could be a one-note gag (ahem), but Ojala keeps it interesting by applying an obsessive level of craft. The audio and video match up so tightly that if you don’t know what it’s supposed to sound like, you could be forgiven for mistaking these videos for the real thing. In a way, this reminds me a lot of Lasagna Cat – not in the effect or the execution, but in the peculiar love-hate relationship that Ojala/Fatal Farm must have with the music/comics they so savagely deconstruct. These are song parodies of a very different nature than, say, Weird Al Yankovic. Weird Al is the court jester of rock: yeah, he makes fun of the nobility, but he does it in a kind of safe way, and at the end of the day, he depends on them for his livelihood. Ojala is the guy who gets arrested while trying to burn down the castle. Weird Al writes some great parodies, but I can’t imagine listening to a Weird Al song and deciding that I no longer like the original version… and I’m feeling seriously ambivalent about Metallica right about now.

(Shredded to Pulp via Wired. Guitar Hero site via Tomomi.)