You kind of can’t see it in the still, but those gold things on the front of the ship are actually spikes. Because this is an EVIL empire, you see.

Here is where matters stand at the start of this episode:  the Discovery is still trapped in the mirror universe. Burnham, Lorca, and Ash “Normal Human Middle Name” Tyler have gone undercover on the Shenzhou’s evil counterpart to raid the empire’s data banks for information about the Defiant, the last ship to get stuck in the mirror universe. Hopefully they can use this to find their way home.  Meanwhile, Tilly and Saru try to wake Stamets up from his spore-induced coma. By the end of the episode, a lot has happened! Tilly accidentally kills Stamets (although then it looks like maybe she actually doesn’t, and his consciousness is just off palling around the mycelium with Evil Mirror Stamets). Ash “Probably Voq” Tyler finally blows his cover after coming face to face with his kinder gentler mirror universe counterpart. Michael manages to smuggle both Ash/Voq and the data on the Defiant back on board the Discovery. And also – whoop, whoop! – nobody cares about ANY of that because evil Michelle Yeoh with a goatee has entered the arena! This! Is! Not! A! Drill!

So it’s an eventful hour of television. The real meat of the episode is obviously the Ash/Voq reveal:  even though everyone expected SOME version of this, I think we were all curious to see exactly how it was going to play out. Certain parts of it were cool! I really enjoyed the standoff between Tyler and Mirror Voq:  a Klingon in human’s skin facing a Klingon with a humane heart. (The implications there are worth teasing out. It sort of ends up painting the Klingons a little further into an ideological corner, because it suggests that Mirror Voq actually has strayed from the true path of Kahless. But it made for a cool scene nonetheless.)

See, the guy who’s Klingon on the INSIDE still thinks that Andorians are filthy. Incidentally, what was T’Kuvma’s problem with Andorians specifically? None of the other species get specifically insulted!

Unfortunately, the climactic scene between Ash and Burnham did not work as well. I think this was basically an acting problem… Shazad Latif, who plays Tyler/Voq, is fantastic when he’s speaking Klingon, good when Mirror Voq speaks in English, and fine when he’s playing regular old Ash Tyler… but he didn’t really pull off Voq-in-Tyler’s-body. There’s a line where he says “under the skin, I remain Klingon” or something like that, and he just delivers it like it’s any other line that Ash would say:  it’s sincere, it’s untheatrical, the tone of voice is generic-CBS-love-interest, etc. What he needed to do, there, was to shift his tone and cadence ever so slightly towards those barked-out two-syllable declamatory bursts that all of the show’s Klingon is delivered in. I… Remain! Klingon! (And again, Latif is really good at that! And we know he can do it in English too, because he does as Mirror Voq!)

Credit where due:  the scene was beautifully shot and written, Sonequa Martin-Green was great in it, and Latif is never better as Ash Tyler than he is in the first few minutes of this. But once the Voq persona crawls out into the open, it stops clicking. And that’s a real shame. They built up this arc so nicely that it was even making inroads among the haters, so if there was ever a place where the show needed flawless execution, it was here… and they just didn’t have it. 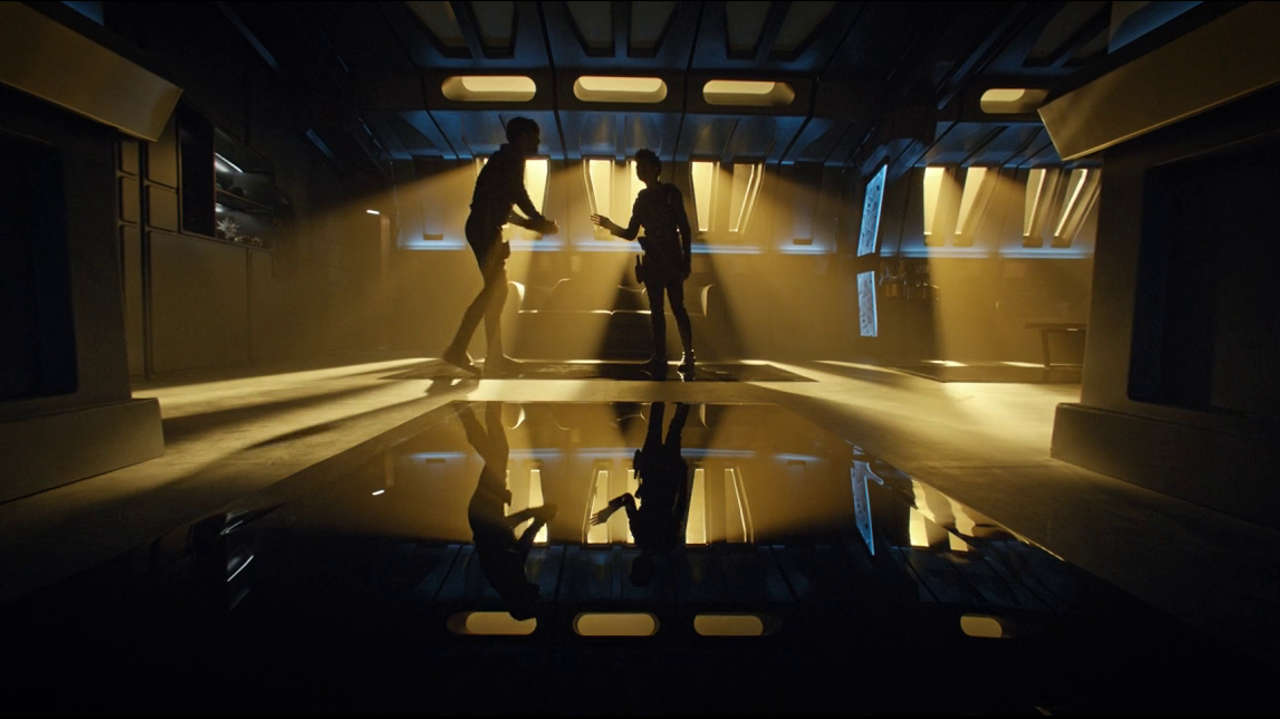 Yes, Discovery, they are in a mirror universe, we get it. You can stop now.

There are still some lingering questions about Tyler/Voq, of course. Was there ever a Tyler? How real is his personality? What are the ethical implications of punishing a body that contains two souls? How is Burnham going to deal with getting Space-Catfished? So hopefully the show will manage to give the character a better send-off.

The Traumatic Elephant in the Room

Star Trek is threading a dangerous needle with Tyler, though. As presented to us, he’s a victim of torture and sexual assault… and almost from the get-go these qualities have marked him as slightly sinister. (I wonder how much it matters that he’s a male victim of abuse? There’s an idea that guys aren’t supposed to be… like, permeable in this way, so the mere fact that Ash is so obviously traumatized by his trauma marks him as untrustworthy.) As his arc continues, we’re given to understand that his trauma has made him dangerous. And then in the cruel, final reveal, we learn that Ash simply is his trauma:  whatever else he used to be has been replaced by his trauma; what’s left, beneath the skin, is a monster. And it’s the same kind of monster that traumatized him.

And also probably the most explicit image that we’ve ever published on overthinking it dot com, come to think of it.

This is weird, right? Trek has only a handful of models for female sexuality:  there’s woman as territory/target, as in the archetypal green-skinned space babes that Kirk and/or Riker seduce (although this is actually much rarer than you might suppose). There’s the long-simmering platonic girl-next-door, exemplified by Beverly Crusher. There’s flouncy workplace eye candy (Deanna Troi, Seven of Nine, dozens of miniskirted extras in the original series). And then there’s the menacing predatory dominatrix type:  L’Rell, the Borg Queen, and the Mirrorverse Kira Nerys. Only one of these has any kind of sexual agency, and surprise surprise it’s the “evil” one. Carrying this over into the Ash/Voq plot, we end up with the following constellation of ideas, all of which are kind of haphazardly smushed together:

… and so on. So far, they’ve been (quite skillfully) mining this subtext for emotional effect, but they haven’t bothered to challenge or interrogate any of it — and if they resolve the Ash/Voq arc without challenging it, then that is going to be Problematic.™ I think we need a confrontation between Ash and L’Rell where she’s trying to defend herself, “You accepted the pain! You asked me to do it!” and Ash snaps back “Voq asked you to. I never agreed to the pain, and I never agreed to the pleasure.”

• Conspiracy theorists will get a kick out of the little mocking smile that plays across Lorca’s face while he watches Burnham bow to Emperor Georgiou.

• Starfleet and the Terran Empire both have freaking weird corpse management policies. When they “execute” Tyler by beaming him out into space, is there nobody whose job it is to keep an eye on his body just to make sure that at some point it actually dies? When Stamets dies in the spore chamber, is it Starfleet policy to just leave the corpse in the chamber indefinitely, as some kind of ghoulish object lesson to Tilly? You know what, I must be misreading that one — maybe the medical crew was supposed to have restored him to stable condition, and Tilly’s just crying because she thinks she’s left him braindead. I could have sworn that he died, though.

• It’s interesting that the big lesson Burnham needs to learn from Mirror Voq is basically Muzafer Sherif’s Robber’s Cave Experiment, you know, from Psych 101. Part of me is disappointed — but social-science fiction is always hard to pull off, because you do need people (and Klingons) to behave in psychologically believable ways. It’s not like Voq could tell her “Oh, how did we undo centuries of ingrained xenophobia? We just reversed the phase polarity on our dilithium buffers.”

• Calling it now:  the synthetic Tyler personality is going to win out over the Voq Prime personality, but because Mirror Voq was killed in the bombardment they’re going to have to re-Klingonify him and leave him behind in the mirror-verse to run the resistance, Victor Laszlo style. (Although in this case I guess he’s both Laszlo and Ilsa, and Rick is the one who’s getting on the plane.) “We’ll always have Paris, Michael.” “I remember every detail. The Germans wore gray. You wore Ash Tyler’s hollowed-out skin.”