Hey, so did anyone see that Daniel Radcliffe farting boner corpse movie? I didn’t see it when it was in theaters, but now I feel kind of bummed out by that, because it turns out it was directed by the music video directing team DANIELS (Daniel Kwan and Daniel Scheinert), whom you may know as the team responsible for the “Turn Down for What.” Man, remember that crazy video?

Are we all back? Good. Now, I have to say, I’m puzzled by the relative response these videos got. Not by the way people complained about “Blurred Lines” — that song is hella problematic. But where are the complaints about “Turn Down For What”? Lest we forget, this is a film where a man breaks into a woman’s home and starts smashing her furniture with his dick — and then, after screaming for twenty seconds, she loses herself to the music and starts crotch-smashing right alongside him. Hey, she likes it! It’s almost as if he knew she wanted it, or something. Pay close attention to the actress’s facial expressions around the song’s second bass drop:  how she shifts from fear, to confusion, to reluctance, to enthusiasm. It’s a remarkable piece of silent film acting on her part, for sure. But how was this NOT the center of an internet shitstorm?

As you can guess, this is sort of a rhetorical question. I think there are a few contributing factors:

1) The problematic aspect of “Blurred Lines” is in the lyrics. The problematic aspect of “Turn Down For What” is in the video. Maybe there just aren’t that many people out there who bother to watch videos in the first place (unless there’s nudity! which is a whole other issue!), let alone bothering to subject their visuals to an ideological critique.

2) Maybe the problem with “Blurred Lines” isn’t just that it obviates consent, maybe it’s that Robin Thicke wanted to obviate consent while coming across as harmless. Maybe it’s not “I know you want it” that pissed people off, so much as the idea that “I know you want it” is basically sexy/frothy rather than violent/menacing. “Blurred Lines” is Dennis Reynolds grinning about “the implication” of women being stuck on a boat with him; the internet’s response is Mac being like “… are you going to hurt these women?”

Lil Jon does not have this particular problem. (Harmless isn’t really one of the things that he does.) So maybe everyone who watched the “Turn Down For What” video was just like, “Violent and menacing…  check!” And say what you will about that video, it at least gets that sexual violence is a bad thing. This image:

doesn’t stop existing just because of what happens later in the video.

3) Finally, I’m not sure that the stuff that’s happening in the “Turn Down For What” video is really about sex. Or at least not about intercourse. (Here’s where this post gets a little overthinky.)

Let’s talk about sexual fetishism for a minute. This concept gets tossed around a lot, so we need to define our terms if we’re going to use it in any kind of a serious argument. In casual conversation, a fetish is just anything that you’re into, sexually. Are you into… being gently spanked? Into eye contact? Into older men? Into slodging? Well then that’s your fetish. It doesn’t need to even be sexual, really:  I’ve had someone tell me that they had “like, a fetish for 90s sitcoms,” and I don’t think she was sounding out our sexual compatibility. (I mean, we were eating bagels at the time. It seems like a weird moment to bring it up, unless you also have a fetish for bagels.)

There’s also a technical definition of fetishism, as applied by modern psychoanalysis, which indicates a total or nigh-total sexual interest in something other than an attractive naked human. To a clinician, a fetish for women’s shoes doesn’t mean you think high heels are sexy: it means that you cannot become sexually aroused unless you are thinking about/handling/wearing a pair of Jimmy Choos. (Or, you know, a pair of grotty old house slippers with a hole in the inseam, depending on what floats your particular boat. Why should the culturally mandated “sexy shoes” get to have all the fun?) Even here, I think the DSM criteria says that fetishism should only be thought of as a disease if it’s making the patient miserable. “So you basically want to fuck yachts: do you LIKE wanting to fuck yachts? Yeah? Okay, buy yourself a Chuck Tingle novel and let your imagination run wild.” 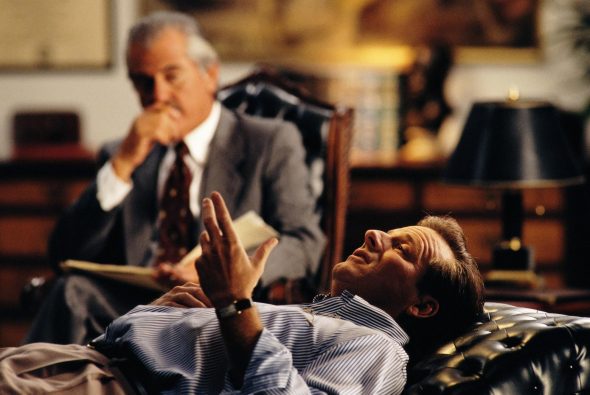 “Now let’s get back to blaming your mother for all of your problems.”

But the definition of fetishism that matters for us today is Freud’s. Which — Freud being Freud — turns out to be kind of ludicrous, but also oddly compelling.

Freud explains fetishism like this. Imagine that we’re watching a little play with three characters:

• The Seducer:  a dashing and young man-about-town, who represents the patient

• Finally, The Chaperone:  an interfering old lady who wants to stop the seducer from inserting tab A into slot B.

The chaperone isn’t really a person (although it becomes convenient, for the sake of the metaphor, to pretend that she is). Rather, she’s all of the social forces and physical objects that stand between the man and the object of his desire: Judeo-Christian morality, a corset, whatever. For a man with properly calibrated sexuality, seduction involves doing whatever you need to do to distract the chaperone (satisfying morality by getting married, satisfying the corset by unlacing it), and then making as much time with the ingenue as possible. For the fetishist, however, fear short-circuits the process. Because sex, after all, is vulnerable and scary and ridiculous. What if the ingenue doesn’t want me? What if she laughs at me? What if one of us farts? Like, DURING?

The chaperone, on the other hand, is safe. Because you don’t really want her, she’s powerless to harm you — and after all, in many cases, she’s just an inanimate object. (Pantyhose don’t care if you fart.) The fetishist, then, gets hung up on the process of satisfying the chaperone, going to ridiculous lengths to keep her entertained and distracted, and only occasionally (and grudgingly) sparing a few moments of attention to the ingenue. A “normal” sexual encounter always includes those awkward moments where people try to take off their socks without looking like idiots; the fetishist bypasses this anxiety by trying to fuck the sock.

On this account, Turn Down For What is about a guy who has a party fetish.

For this reading of the video to work, we have to say that parties are basically chaperones:  that is, that parties are obstacles that people try to bypass/satisfy so that they can have a culturally validated sex life. But this is totally what parties are! Hear me out. I’m not saying that this is the only thing that parties are. I’m just saying that hookup culture is basically a phenomenon of parties, and that there’s a sense that hooking up at a party is a function of how “good at partying” you are — how charmingly you make small talk, how smoothly you dance, how well you dress, how much you enjoy slurping tequila out of people’s bellybuttons. Finally, people sometimes go out to parties with the explicit hope/intention of finding somebody pretty to bump uglies with. Your goal, on those nights, is to party well enough to satisfy the chaperone, and then get away from the party, into some sexy person’s boudoir, so that you can spend some quality time with a vagina. (Or a penis, because you know what Freud, I’m striking a blow for equality. You’re dead, you can’t stop me!)

So anyway, let’s read this back into the video for “Turn Down For What.” When Dan Kwan smashes through the ceiling at the beginning, he ends up in a boudoir with a lady in her underwear. I don’t want to say that Sunita Mani is really seduced, here…

But there’s a sense in which this is Party Mission Accomplished. (You know, if you’re human garbage.)

And yet things don’t go in the direction that one would expect. The horrifying opening sequence turns out to be the only part of the video where sex is even on the table:  from here on out, the “normal” seduction that a party would facilitate unspools more or less in reverse. When Kwan starts humping directly at Mani, rather than just smashing her furniture, he crotch-thrusts her into her going-out clothes. Once he manages to win her over, they leave the apartment. Rather than trying to get her alone, he surrounds her with people (all of whom are gradually infected with his party madness). And the goal, rather than a sexual encounter, is the party itself.

This was his only endgame.

Does this make it harder to stay offended by the video’s consent-eliding opening? I tend to suspect that it does. And if I’m right, this offers — surprisingly enough — a validation of Freud’s theory of the fetish. Because in Freud’s account, after all, fetishism is basically a way to defuse the anxiety that surrounds actual sex. In the “Turn Down for What” video, it may serve exactly that function.

Or read more from… Featured, Music, blurred lines, Music, sexual fetishism, slodging, turn down for what