We don’t usually weigh in on political issues here at Overthinking It, but I think it’s justified in this case, because it seems like these days everyone and their mother is subjecting the popular culture to level of scrutiny it probably doesn’t deserve. For instance, take the controversy surrounding the interview that Ted Cruz gave to the New York Times Magazine. Although really, the controversy is just about the article graphic listing Cruz’s favorite superheroes:  Spider-Man, Wolverine, Batman, Iron Man, and Rorschach. (And really it’s just about Rorschach. No one gives a damn about the rest of the list, for all that Spider-Man is the only one who actually gets mentioned in the body of the article.)

The internet is, predictably, going nuts. (In fairness, we are in the early stages of an election cycle, and it was either this or continue to pay attention to Donald Trump.) Here’s Susana Polo explaining in Polygon how this proves that Cruz has the reading comprehension skills of a five year old because if you actually pay attention to Watchmen you’ll realize that Rorschach is a goddamned monster. And here’s a series of tweets by The New Republic’s Jeet Heer explaining that, to the contrary, Rorschach is the shining moral light of the Watchmen universe.

Both of these are entertaining reads, and both make interesting points. (Polo’s article is less about Cruz—and really, less about Watchmen itself—than it is a brilliantly observed account of her own changing reaction to the comic over time. Heer’s tweeticle isn’t as personally compelling, but for my money is slightly more correct in its reading of Watchmen, and makes the not-uninteresting point that if Alan Moore really meant Rorschach to be as off-putting as all that, he may not have quite understood his own creation.) But I think both of them are based on a category error. So yeah, Rorschach doesn’t belong on that list next to Spider-Man. But it’s not that he has a different personality. It’s that he is fundamentally a different kind of creation.

Rorschach is a particular fictional character from one particular book. Imagine if they’d asked Cruz what his five favorite characters from Shakespeare were, and he listed Macbeth. 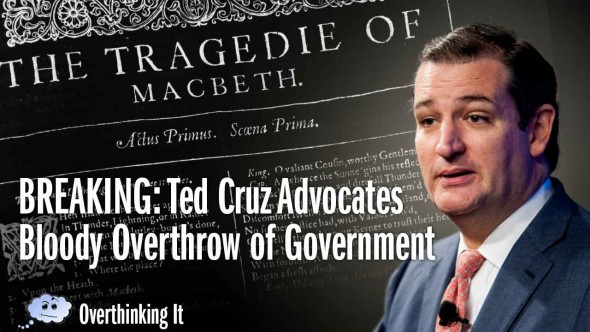 We wouldn’t even, would we? I think freaking Iago is a great character, so Jesus I hope we wouldn’t. What we’d probably do, what we should do in that instance, is assume that Cruz is making the aesthetic judgement that MacBeth is a well-written character whose struggles are compelling, and so on. And we should treat Rorschach the same way.

But here’s where the confusion comes in—Rorschach is sitting there on a list next to Spider-Man and Batman, and those guys are sort of beyond aesthetic judgement. (So really, now that I think about it, this is Cruz’s own fault. Or rather the fault of his media team, because I’m sure that list was stage-managed to death. 80% bread-and-butter box office draws, and 20% vaguely-on-message critical darlings? Yo, I want to set this list up on a blind date with Hilary’s Spotify playlist, because I think those two crazy kids would really hit it off. But I’m losing the thread here, so let’s just pretend that Cruz made his own list and that it’s about something other than branding.)

Here’s my point:  when it comes to Spider-Man, you can’t say that he’s your favorite hero because he’s so well-written. Spider-Man is a great and a terrible and a mediocre character, depending on who happens to be writing him on any particular day. The same goes for Batman, and Wolverine, and every other franchise character—James Bond, Nancy Drew, Robin Hood, you name it. These characters have been kicked around between different authors, different artists, and different media, rebooted and reimagined and alternate-universed, to the point that there is no such thing as a definitive version of the character. In this sense, they’re sort of like characters from ancient myth:  if you ask me to describe Spider-Man, I’m going to be collating a bunch of traits from a bunch of different sources with varying degrees of canonicity, and although he appears in a lot of things that are obviously literature, something about calling him a literary character feels off. (And there’s other stuff: None of these characters can really arc, for instance, because they have to keep resetting to their origin stories. I touch on this in two old articles on the Batman and Terminator franchises, if you’re interested.)

So if I say Spider-Man is my favorite (rather than saying, for instance, that the early run of Ultimate Spider-Man is my favorite, or something like that), what am I even doing? It’s not small-scale literary criticism, the way it is if I say I like MacBeth or Iago. I have to be doing something else…and I do think that when people pick their favorite franchise superheroes, there’s something aspirational about it. I’m not necessarily saying that I aspire to be Batman, but I’m saying that the world would be a better place if there were more Batmen in it. And again this is sort of like the way we think of characters from myth. If you tell me that Ares is your favorite greek god, I’m going to think you’re a psychopath, even though Ares shows up in a lot of the funniest stories, and he was a great villain on Xena.

So when Rorschach shows up on the same list as Batman and Spider-Man, maybe it’s no surprise that everyone is rushing to judge him by mythic/aspirational criteria. “You can’t want to be Rorschach! He’s a colossal asshole!” “Of course you can want to be Rorschach! He did that one good thing that time!” But because Rorschach is a character, and not an archetype, both of these things are obviously true simultaneously. There are times in the book where we identify with Rorschach quite closely. There are other times when we are violently slingshotted out of our identification with Rorschach—and this is precisely as Alan Moore designed it. Where exactly the line falls is going to be different for every reader. For me, the whole “strident homophobia” thing was a real turn-off. Based on his own avowed positions, Cruz presumably has less difficulty with this. But surely he too draws the line somewhere. And surely the human thing to do, for both of us, would be to aspire to be Rorschach at his best, and aspire to avoid being Rorschach at his worst?

Now, one thing that emerges from Polo’s article is that, whether I like it or not, there are a bunch of people out there who do think about Rorschach as if he were Batman. (These would be the people who ask you who your favorite Watchman is as if that were even vaguely the point. For the record, if I have to pick, my favorite Watchman is The Black Freighter. The thrill of being a boat!) But it seems ungenerous to ascribe this goofy opinion to Cruz when there’s a perfectly valid un-goofy way to interpret him. (And the people defending Cruz’s choice on mythic/aspirational grounds are every bit as wrong. They’re still acting as if “my favorite hero” meant “the hero who best approximates the virtue of heroism.” It doesn’t.)

TL;DR:  if he really wanted to uncritically embrace Rorschach’s ideology, Cruz could have just picked Mr. A. Call me a starry-eyed optimist, but the fact that he picked the brilliant literary deconstruction of Mr. A strikes me not as evidence of an inability to recognize deconstruction, but as evidence of some slight taste for literary brilliance. (Or again, as evidence that this is the image his media team wants to project.) 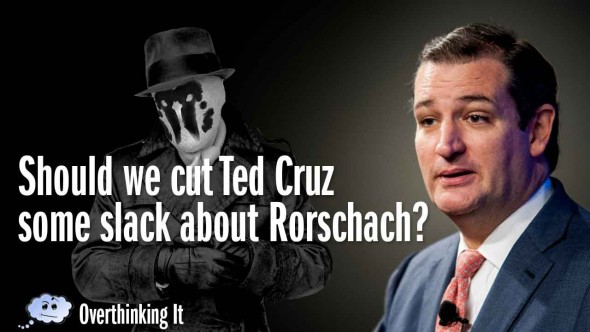 8 Comments on “Should we cut Ted Cruz some slack about Rorschach?”