We all have a shameful list of classic movies that we’ve gone far too long without seeing. For years, Sunset Boulevard was one of mine. In my defense, Sunset Boulevard has become so ingrained in Western culture that one can almost discern the plot from its memorable quotes and images. “All right, Mr. DeMille – I’m ready for my close-up.” Gloria Swanson leering at the camera, or glaring under hooded eyes. Hell, the movie begins by spoiling the fate of the protagonist – I knew half the story already!

And yet, watching the movie for the first time, as I did this past weekend, I was struck by Norma Desmond’s quest to return to stardom. Desmond’s attempting to stage a comeback, a return to her celebrity heyday with an epic script. It’s never stated exactly how many years ago she was a star, but stardom is such an imprecise quantity (not counting the Iron Law of Stardom, of course) that it would be hard to benchmark. There are several references to “twenty years” in dialogue – Desmond having waited twenty years for deMille to call her; Desmond “playing to an empty house” since “the audience left twenty years ago,” and so forth. William Holden’s character, Joe Gillis, also makes reference to a woman of fifty trying to be twenty-five. So we’ll say that the peak of Norma Desmond’s stardom was twenty to twenty-five years ago.

Does that strike you as very long? I observed after seeing the film that the modern-day equivalent would be Brooke Shields wasting away in a mansion, waiting for Louis Malle to call her back. It seems silly to think of Shields, or any actor from the early 80s, as a delusional recluse pining for another shot at stardom. But that’s because many of them have kept working, albeit in diminishing roles, or have aged gracefully into the next phase of their career. It’s only Norma Desmond’s character who is frozen in the past.

But even so, twenty-five years did not strike me as such a ludicrous length of time. Gillis struggles to remember her upon first meeting her (“you used to be big”). The only folks who remember her at the Paramount lot are industry veterans – an aged security guard, a game old stagehand, and the actors who would recognize her name as a legend. Is twenty-five years ancient history in Hollywood? Does a mere generation consign one’s name to the dustbin?

Just how long can someone go before making a comeback, anyway?

This being Overthinking It, I realized I needed data. So data I obtained. 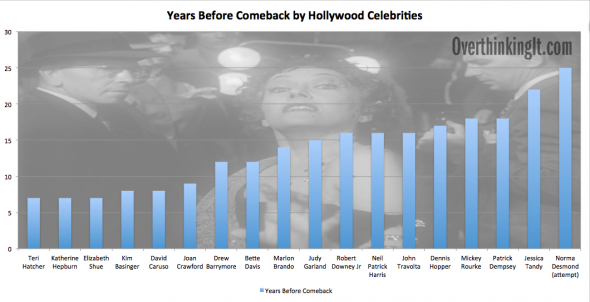 This chart (click to enlarge) tracks years between the last big hit and the comeback of various celebrities. I picked big names that had distinct phases in their careers separated by a significant length of time. And that separation must have been marked by diminishing career fortunes. Will Smith has had different phases of his career (teen rapper to TV actor to action superstar to father figure), but he’s never dropped off the radar for an extended period. Robert Downey Jr, on the other hand, had a lot of lean years.

Some obvious limitations I must confess:

1. n=17 is not a huge sample size. You can get published with less, but I’d still rather have significant data. But it’s hard to clearly define what constitutes a comeback (for reasons elucidated below), so this was the biggest list I felt confident in. If you think there’s anyone obvious I missed, sound off in the comments!

2. What qualifies as a “comeback” is a fuzzy term. I defined it as being given top billing in a hit show or movie. Drew Barrymore was in many movies between Firestarter and Scream, for instance – including the critically regarded Everyone Says I Love You and the summer hit Batman Forever – but Scream was the biggest movie in which she received top billing.

3. The columns on the chart above measure years between a comeback performance and one’s last big hit. The “last big hit” is equally fuzzy. For instance, was The Young Lions Brando’s last hit before his comeback, or was it Guys and Dolls?

4. Achieving a comeback is something that can only be defined after the fact. For instance, Jenny McCarthy might have been going for a comeback with 2005 bomb Dirty Love. Meanwhile, who would have expected that John Travolta could find a career again, 16 years after Grease? It’s pretty subjective.

In short, the data aren’t perfect. But what can we learn from the data we have?

1. The mean number of years between a last hit and a comeback (what I’m calling the sunset period, in honor of the movie that inspired this exercise) is 13.05, with a standard deviation of 4.71. That means, if successful sunsets fall in a normal distribution, that more than two-thirds of all comebacks will be between 8 years and 17 years after a star’s last big hit. That doesn’t mean a star who’s been off the market for 20 years can’t make a comeback, since “the odds that a comeback after an x-year sunset will succeed” and “the odds that an artist’s sunset will be x years” are two different measurements. But since every comeback on this list is a successful comeback, it tells us that a star’s ability to regenerate is pretty short.

2. Nine of the seventeen stars on this list are female; eight are male. Of those nine, seven are clustered in the first half of the distribution of sunsets. Only Judy Garland and Jessica Tandy pulled off a comeback after a sunset of greater than twelve years. This suggests that the shelf life of a female actor is much shorter than that of a male, which dovetails with conventional wisdom.

3. And nobody has actually managed a comeback after a 25-year sunset. Of course, Norma Desmond’s case was unique. She was not only attempting a comeback, but trying to play a role she was clearly unsuited for: the magnificent, seductive Salome, daughter of Herod. Every real actor who’s made a successful comeback has done so by redefining themselves. In showing their ability to take on a new type – the aging warrior instead of the young punk, the elder statesman instead of the tempestuous rebel, the femme fatale instead of the damsel in distress – they’ve extended the lifespan of their career.

Of course, as with all good research, this data needs to be disseminated and vetted. So have at it, Overthinkers! What, if anything, have we learned?

14 Comments on “The Sunset Boulevard Effect”