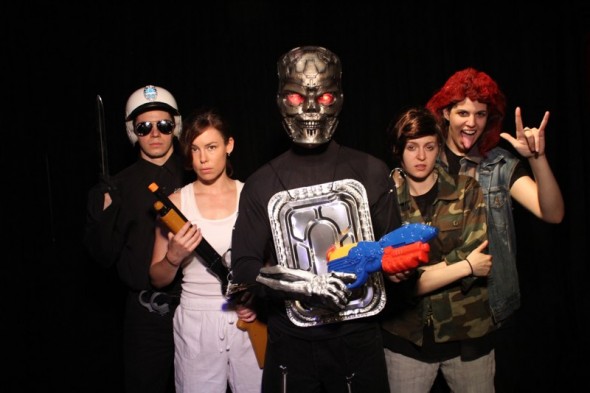 We’re a little obsessed with Terminator around here. Okay, when I say “we,” I mean mostly “Lee.”  But we managed to find someone who’s taken Terminator fandom to an even higher level: Thomas Blake is the director of Terminator Too: Judgment Play, a farcical stage adaptation of Terminator 2 that’s playing at Santos Party House in New York City until August 11. He graciously agreed to an interview, and he’s also hooked us up with two pairs of tickets to the August 11 show that we’re giving away to two lucky winners! Check out the contest page for details on how to enter.

Enjoy the interview, and remember, there is no crazy celebration of pop culture but what we make for ourselves.

Thanks for talking to us about Terminator Too: Judgment Play. It’s safe to say we’re all big fans of Terminator, but I need to know where you stand on one important point: Terminator Salvation: worst Terminator movie ever, or worst movie ever?

Terminator Salvation? Never saw it. After the first frame of Terminator 3 I quit. The first two were so good I didn’t want to ruin the experience.

Smart move. Your CPU must be a neural net processor. In all seriousness, though, why do you think T2 has such enduring appeal? What makes this movie so insanely great and “sticky” in the popular imagination?

It was groundbreaking on many fronts. Obviously, the special effects that were used had never been seen before, but the action sequences, the awesome script, and introducing the world to Eddie Furlong also made it an amazing movie. Not to mention unforgettable lines like “Hasta la vista baby” and “Chill out, dick wad!”

I love the fact that a member of the audience gets to play Arnold Schwarzeneggers’s part. What inspired this choice?

I thought that if we were going to pick someone out of the audience, that it had to be Arnold. How many times do you hear people try to mimic Arnold’s accent? I figured, “If you think your Arnold impersonation is good, then here is your chance to prove it.” And hearing different people try that accent every night is just as I suspected… HILARIOUS!!!

How do you feel about Arnold’s status as a pop culture icon after his recent embarrassing scandal?

Has it ever been a question that Arnold is a ladies man? Did you see Pumping Iron? As bad as Arnold’s acting may be, and as bad as some of the choices he has made in his personal life (not including some of the TERRIBLE films he agreed to do), he is still a legend! Every kid that grew up in the 80’s and 90’s will always have a special place in their heart for Arnold, no matter what he does.

T2 is one of those movies that beats you over the head with its messages: NO FATE BUT WHAT WE MAKE, I SWEAR I WILL NOT KILL ANYONE. What would you say is the message of your live show? What life lessons do we learn in Terminator Too?

The message of our show is “Life’s short so party hard, don’t take yourself too serious, and buy the damn poncho!” 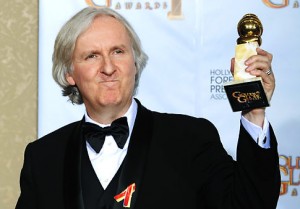 Compare and contrast yourself with James Cameron.

What do you think about the time travel logic of the Terminator movies? The whole thing falls apart if you apply even a moderate level of scrutiny to its mechanics. Do you have a grand unified theory of Terminator Time Travel?

Sorry, I’m afraid not. You’ve thought way too hard about the the time traveling in the Terminator movies!

Yes. We try hard to live up to the name of our site!  Anyway, do you have any thoughts on the use of time travel as a storytelling tool in the Terminator movies?

Time travel is always fun, and thank god for movies and books, because let’s face it, it will never happen. But if it ever does, I hope to ride in a Delorean or a phone booth!

Funny you should mention that! In the show, Skynet has become one of those. You’ll have to come see it to find out which.

If you found yourself being chased by a Terminator, what would your plan be? Run to the desert? Fight it with high explosives? Allow yourself to be trapped with it in an enclosed place (steel foundry, factory)? Try to reason with it?

I would ask it to audition for the role of Arnie in the show!

What are your hopes for the future of the Terminator franchise? New movies? TV shows? A straight up reboot? Musical? Or just leave it alone?

The future of the Terminator franchise is a new hilarious, interactive live spoof called Terminator Too: Judgment Play coming to a city near you very soon!

Bringing in an audience member to “star” in the performance is a big risk, but it can also have a big payoff. My favorite such moment was when the Ahnuld for this evening, when asked to sing “And I Will Always Love You,” simply said, “Yakkety Yak” instead. What are some of your other favorite, unexpected moments from your audience Terminators?

Every Terminator is so different. That’s what makes the concept so fun. We had one Terminator, opening night who was a Broadway star, so his stage presence was amazing. We’ve had a couple who were a little tipsy which is always a hilarious challenge. One of our best though was a guy who had a slight stutter. I mean this guy was obviously so confident to get up there and audition despite his speech impediment, and that same confidence was carried throughout the show in his performance. It was truly incredible!

Thanks again for speaking with us, and best of luck with the show!

Since this interview cannot self terminate, I will now lower you into the steel: