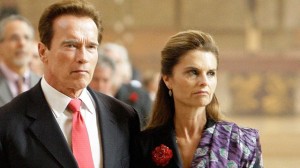 Arnold/Maria, before this whole mess blew up.

It would be redundant if I were to recap or report on the various expressions of disappointment and outrage over recent revelations of Arnold Schwarzenegger’s infidelity, and I wouldn’t be overthinking it if I were to merely add my own disappointment to the chorus of woes. Yes, I am a big Arnold fan…no, let me restate that. I am a big fan of the movies of Arnold (more on that distinction later), and I too feel a great sense of disappointment over this news and sadness for the Schwarzenegger family as they endure the harsh public spotlight in this time of personal struggle.

So what’s a bummed-out, overthinking Arnold fan to do?

Why, get to the analytical chopper and parse out the implications of this incident, of course.

So what does it mean to be a fan of someone’s work, rather than a fan of that person? Is such a distinction even possible?

Let’s use a highly reductive example as a straw man starting point. Vincent Van Gogh is regarded as a master (of painting), and his works are known throughout the world as shining examples of human artistic achievement. But Vincent Van Gogh, the man, suffered from mental illnesses and was likely not a pleasant person to be around. He’s not the type you’d want your kids hanging around, and his life is certainly not the type you’d want to emulate, even if you wanted to be a great painter.

Now, I’m not saying Arnold Schwarzenegger is the Van Gogh of acting. But let’s use this as an analogy for the sake of the argument. Actually, I will say that Arnold’s on-screen personas in the roaring action movies of the 80’s and 90’s is as significant a contribution to film as Van Gogh’s impressionist paintings were significant contributions to art. And that’s where the analogy falls apart. Van Gogh was held in little esteem outside of his artistic output. Arnold, on the other hand, had a compelling personal life story: a true rags-to-riches American Dream rise to power that many would have deemed worth of emulation, whether or not they wanted to be actors or politicians.

The main problem with this comparison is that acting and painting are two totally different things. Acting, above all other professions that create so-called “role models” (sports, in particular), blurs the line between being a fan of someone’s work and being a fan of that person. Although they play characters on screen, their bodies are the vessels for those characters, the transmission method by which we, the audience, experience the words, laughs, cries, and tears of heroes like Kunta Kinte, Luke Skywalker, and The Terminator. In other words, the gap between the performance and the actor delivering the performance is so much smaller than the gap between a painting and the painter, a designer dress and the designer, a computer and the egomaniacal CEO of the computer company, etc. etc.

That is to say, if Steve Jobs were caught fathering a child of wedlock similar to what Arnold did, I doubt millions of Apple fanboys would suddenly look upon their iDevices and MacBooks with disgust and change their longstanding relationship with the corporation that is the direct fruit (pun intended) of Jobs’ labors.

In a way, Arnold is a victim of his own success at defining and dominating a peculiar niche of acting: the oddly accented, immensely built, unrelenting yet humorous tough guy. Those attributes all carried over well into his public and political life, so why would he bother separating his personas depending on the context?

Why bother putting away the huge knife on your desk before filming a message?

Arnold made this bed, and now he’s forced to lie in it. As he struggles with the personal and legal fallout from this incident, his comeback film and TV projects–everything from an animated kids show to future Terminator movies–are all officially on hold and unofficially in serious jeopardy.

Arnold, the Terminator, the Governator, and now, the Cheating Father of a Love Child: they are all one and the same.

If there's any good thing to come out of this mess, perhaps it's that this animated kids show, "The Governator," won't get made.

So where does that leave us fans? If Arnold has rolled up all aspects of his persona into one, and he commits a vile act in his personal life that has already had consequences on his future film and TV life, how are we supposed to react?

Let’s use another highly reductive, straw-man example to start: as an Arnold fan, I could treat Arnold the actor with the same level of contempt that Arnold the cheating husband gets. I could throw out my Terminator DVD collection, my “Governator” T-Shirt, and unequivocally renounce my Arnold fandom in as many public forums as possible: Facebook, this website, LinkedIn (true story: I had a reputation as being a huge Arnold fan at my old job and even incorporated quotes from his movies in my farewell speech), Time Square, etc. If Arnold ever makes it back to movies, I would never watch them, and I would tell my friends not to see them, lest they be in league with a cheating scumbag.

But this is both undesirable and unjustified. It’s undesirable because I still love the Terminator movies–and Arnold’s performance as the titular character. And it’s unjustified because Arnold’s recent actions do not in any way invalidate the artistic achievement of Arnold, James Cameron, Linda Hamilton, Brad Fiedel, and countless others who, decades ago, came together to make two science fiction movies that are still regarded as exemplars of the genre.

In other words, a reputation can’t travel back in time to terminate a movie.

But reputation does change the context of our culture, and that’s obviously important when you’re analyzing (much less Overthinking) pop culture. Take a moment and watch a portion of this video. You may have seen it before; it’s a compilation of 160 quotes from Arnold’s long and eclectic movie career.

Now, a simple question: has the entertainment value of the above video, which we all agree to be very high prior to this incident, decreased in any way because of this incident?

At first, I wanted to say no, it hasn’t. The lines, which were hilarious/awesome/awesomely bad at the time of their writing & delivery, haven’t changed, and the movies that they came from haven’t changed. These lines and these movies earned decades worth of pop culture equity, and there’s no taking that away.

At least, not entirely. The current context of the scandal is not nearly enough to take away that equity, but it is enough to eat into it a little bit. The aforementioned inseparability of Arnold’s personal and professional personas makes it impossible to watch Arnold without thinking of his recent misdeeds, and, well, that’s not as much fun as watching Arnold without knowing all of this.

So what’s an Arnold fan to do, if foreswearing Arnold completely and ignoring his faults completely aren’t options? Although Arnold has staked his entire career on a singular persona that runs common to his personal and professional lives, we as fans have no choice but to go against Arnold’s plans and separate the two.

It’s a sad thing to do. The fantasy that Arnold cultivated–that this unstoppable Übermensch from the movies actually existed in our lives and was a real force for good–was enormously appealing, and we all bought into it, perhaps a little too much. Like so many other simple truths that we clung to in order to make sense of our complicated lives, this one has proven to be false. We’ll find other ones to replace it, but this one is gone and can never come back. We can still watch and enjoy Terminator or True Lies, but it won’t be with the same sense of naïve awe or entertainment that we used to have. Arnold will probably come back from all of this to make movies again, and I’ll probably go see it just for him, but it won’t be with the same sense of childlike giddiness that the purest forms of entertainment evoke.

I guess that’s what we’re losing: this sense of Arnold, both the man and the roles that he played, as one of those few remaining pure forms of entertainment.

Farewell, Old Arnold. When you come back as a New and Different Arnold, it won’t be the same, but at least we’ll have the memories.

10 Comments on “The State of Schwarzenegger Fandom, Post-Scandal”