The Hunger Games are only partly about murdering other teenagers. The other important part is putting on a good show for the Capitol audience. From the day of reaping to the initial presentation, from the training sessions to the final interviews, the tributes have to recreate themselves as superstars. Doing this ensures the fans will love them and that sponsors will protect them. By playing to a part, they make their jobs easier in the arena.

Katniss gets her first taste of this when Haymitch hands her over to the stylists.

“In a few minutes, we’ll be pulling into the station. You’ll be put in the hands of your stylists. You’re not going to like what they do to you. But no matter what it is, don’t resist,” says Haymitch.

Nothing reassures you that people have your best interests at heart than when they say, “Don’t resist.” Fortunately, Katniss’s lead stylist, Cinna, is a dignified and insightful soul, bringing out Katniss’s beauty in a way that no one expects from a District 12 tribute. Still, he has to turn her into a spectacle to do it, setting her alight with synthetic flame.

Haymitch and Effie Trinket continue to mold Katniss as the prelude to the Games continues. They caution her not to show her real strengths during training, but to wow the Gamemakers in private. They take her through several iterations of the interview process. But the real shocker comes with Peeta’s revelation during his interview.

Peeta sighs. “Well, there is this one girl. I’ve had a crush on her ever since I can remember. But I’m pretty sure she didn’t know I was alive until the reaping.”

Katniss is stunned at first, but then accepts what she’s heard. Or rather, she accepts that it’s a ploy on Peeta’s part to make himself more popular to sponsors. He doesn’t have the hunting skills that she has. She doesn’t realize until the end that Peeta’s confession isn’t an act – that he really does have a crush on her.

(Sidenote: it’s possible that Peeta is in love with Katniss and his confession is an act. The two possibilities aren’t mutually exclusive. Yes, Peeta has a crush on her, but why does he have to confess it now? Why announce it for the first time to Caesar Flickerman and an audience of millions? Because if you have to kill the woman you love, you might as well get the audience’s sympathy, no?) 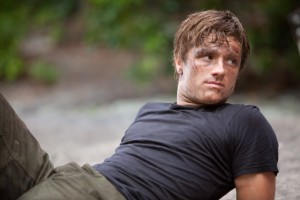 If I get to second base, we get penicillin!

When Claudius Templesmith announces a change in the rules that allows two tributes from the same District to win, this changes Katniss’s strategy. Now she doesn’t have to kill Peeta. She finds him, camouflaged by the riverbed, and does her best to nurse him back to health. But she needs more help than she can scrounge up on her own. To keep him alive, she has to play up the romance angle.

Haymitch couldn’t be sending me a clearer message. One kiss equals one pot of broth. I can almost hear his snarl. “You’re supposed to be in love, sweetheart. The boy’s dying. Give me something I can work with!” And he’s right. If I want to keep Peeta alive, I’ve got to give the audience something more to care about. Star-crossed lovers desperate to get home together. Two hearts beating as one. Romance. Never having been in love, this is going to be a real trick.

A few decades of sociology have taught us how the social order rewards people who fulfill the roles it finds useful. Typically these rewards are subtle and unconscious: we clamor for the alpha’s attention, or dress the same way as celebrities, or swell with pride as our favored sports team or political faction rises to power. But in the Games, these rewards are literal. Thanks to the magic of silver boxes and mesh parachutes, they fall out of the sky, effectively by magic, in response to Katniss’s behavior. One kiss equals one pot of broth.

The pressure of the Games grinds everyone into the roles that the Capitol prefers. Haymitch clearly isn’t cut out to be a victor. Katniss speculates on what thirty years of being unable to coach another tribute to victory might do to a man: “Maybe he wasn’t always a drunk. Maybe, in the beginning, he tried to help the tributes.” Though Effie is a fountain of insipid cheer, she shows flashes of humanity when she lets her mask slip. And in some cases these transformations are literal, as with the grotesque muttations (sic) that assault the three remaining tributes in the climax. Even when you’re dead, the Gamemakers still have use for you.

In Katniss’s case, though, it’s hard to see what’s so bad about her fate. She gets the resources needed to save Peeta’s life. She gets to spend a few days cuddling with a cute boy. By playing up the romance angle to the audience, she carries the two of them to victory in the Hunger Games, earning them both a lifetime of luxury. The millions watching at home are thrilled and two kids come home to District 12 instead of one. What’s so bad about Katniss’s fate?

It’s not the role she chose.

I’m not really sure how to ramp up the romance. The kiss last night was nice, but working up to another will take some forethought. There are girls in the Seam, some of the merchant girls, too, who navigate these waters so easily. But I’ve never had much time or use for it.

In an excellent example of dramatic irony, it’s obvious to everyone except Katniss that Katniss is truly in love with Gale. She’s grateful to Peeta for giving her bread when she was poor and starving, and as a fellow member of District 12 she’d like to bring him home alive. But she’s not in love with him.

And yet her love for Peeta is almost irrelevant, just like Peeta’s capabilities as a baker are almost irrelevant. If acting like she’s in love with Peeta will save his life, and saving his life is her best chance of getting home to District 12, then she’ll act. And when you act a certain way for long enough, you will start feeling that way. Your body will catch up to the feelings you’re simulating, just as Katniss’s heart begins to flutter after repeated makeout sessions with Peeta.

But suppose she keeps up that facade outside of the arena. She’ll have to in order to justify her sinecure (although the existence of two more books in the series suggests she doesn’t retire quietly). She’ll enter a stiff relationship and eventually a forced romance with Peeta, who’s not so dense as to ignore a woman who’s clearly not interested in him. So he’ll be unhappy. She’ll be unhappy, trapped in a chilly relationship. And Gale will be unhappy, separated from the girl he loves by the need to keep up appearances.

Three unhappy people, forced into a love triangle by the dictates of a game of voyeurs. All it would take would be one move – Gale and Katniss admitting their feelings – and we’d have one unhappy person (Peeta) instead of three. Two people better off, nobody worse off. That’s a Pareto improvement if ever I saw one.

“Then how much? No, forget that. I guess the real question is what’s going to be left when we get home?”

“I don’t know. The closer we get to District Twelve, the more confused I get,” I say. He waits for further explanation, but none’s forthcoming.

“Well, let me know when you work it out,” he says, and the pain in his voice is palpable.

This is the sick genius of the Gamemakers’ plan. This is how they can get away with bringing twenty-four kids to the Capitol, immersing them in unimaginable wealth for three weeks, and then returning one of them home. Will the person who wins agitate for social change once they’re back in the District? Of course not. The person who wins the Hunger Games isn’t the smartest or the strongest or the deadliest. It’s the person who’s the best at assimilating Capitol values. They play to the crowd, get the best gifts from the sponsors, and adapt to the Capitol mindset. Winning leaches the rebellion out of them. (Or at least it’s supposed to. Our hope is that, in Katniss’s case, it didn’t take)

It’s easy to take The Hunger Games as a metaphor for the cruelty of adolescence: how fights over status drive people into roles they might not choose willingly. But Collins’s novel also works as a study of economic efficiency. What makes the government of Panem truly chilling is how they exert control on every level. Macroeconomically, they divide the country into arbitrary Districts, compelled to produce one type of good. Microeconomically, they forbid travel between Districts and censor information. And psychologically, they stage an annual series of morbid Games and compel everyone to watch while they turn children into ravening lunatics, stony killers or unwilling lovers. The combined effect is to keep people poor and easily ruled, eager to leap into the roles that the Gamemakers create for them.

The state of Panem rules everyone in its borders, from their actions to their thoughts. For the people of the Districts to have any hope of breaking free, a truly radical idea will need to catch fire. 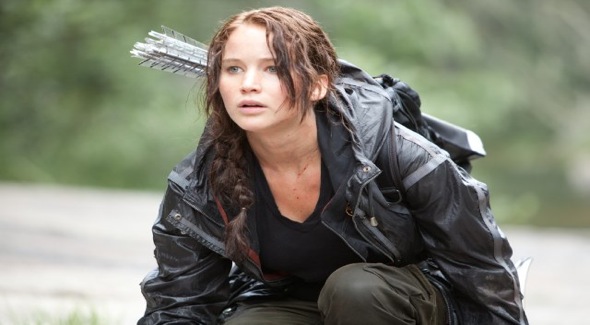