[NOTE: this critique is based on having read the first novel, and only the first, in Suzanne Collins’s trilogy. I know that I’m hinting at several possibilities – revolution, love triangles, high technology – which later books probably reveal. Talk it up in the comments if you like. I know that the rest of the world has read all three books already, and I won’t stop you from spoiling me.]

ONE NATION, UNDER BREAD

The Hunger Games takes place in the dystopian nation of Panem, an oligarchy built on the ruins of what was once North America. Panem is divided into twelve Districts ringing a great Capitol, located somewhere in the Rocky Mountains. Citizens of the Capitol live in modern luxury, while most of the Districts scrape by in subsistence level farming or industry.

Each District specializes in the production of one commercial good or resource. District 12, located in the Appalachian Mountains and home of the narrator Katniss Everdeen, produces coal. Everyone who lives in District 12 either works in the coal mines or works in a support industry (clothing, food service, etc) that services the miners.

Let’s say you’re born into District 12. You will probably do what your parents did for a living. If your parents don’t have a job (Katniss’s father, a coal miner, dies prior to the start of the series), you’ll have to fend for yourself. But don’t expect to go into business on your own and become an entrepreneurial success. The best you can hope for is to make something that people within your District want to buy.

But what if you’re really good at something else? Let’s say you have a gift for baked goods, as Peeta Mellark does in The Hunger Games. What options do you have? Could you go into business for yourself and become a world-famous pastry chef? No. Fine pastries are the province of District 1, makers of luxury goods. And travel between Districts is forbidden.

“We make a goat cheese and apple tart at the bakery,” [Peeta] says.

“Too expensive for my family to eat. Unless it’s gone very stale. Of course, practically everything we eat is stale,” says Peeta. […]

Huh. I always assumed the shopkeepers live a soft life. And it’s true, Peeta has always had enough to eat. But there’s something kind of depressing about living your life on stale bread, the hard, dry loaves that no one else wanted.

So Peeta’s not just wasting his natural talents at covering things in frosting (don’t laugh; it becomes relevant during the Games themselves) because he lacks access to the master chefs of District 1. Peeta’s forbidden by law from being successful at his trade. There may be a huge demand for the kind of bread or cakes that Peeta’s capable of creating. But no one’s ever going to know about it. The only thing that gets unloaded from the District 12 Trains had better be coal. No one in the Capitol cares about anything else. 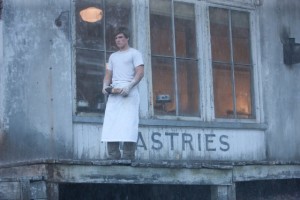 This isn’t just a problem for children with obvious gifts. Katniss is an excellent hunter by virtue of necessity: without her talents, her family would starve. There’s not much demand for a hunter outside the wilds of Appalachia. But Katniss might have the capacity to be a brilliant engineer, or a doctor, or a farmer, or a supply chain manager. None of those options are available to her, however. Since she was born in District 12, her options (prior to the fame that comes from winning the Hunger Games, of course) are to mine coal or live on the fringes.

For the first time, I allow myself to think about the possibility that I might make it home. To fame. To wealth. To my own house in the Victor’s Village. My mother and Prim would live there with me. No more fear of hunger. A new kind of freedom. But then … what? What would my life be like on a daily basis? Most of it has been consumed with the acquisition of food. Take that away and I’m not really sure who I am, what my identity is.

When we learn the setup of Panem, we have an instinctual understanding that this isn’t the best way to run a country. There have to be some missed opportunities here. But is there theory to bear out our instincts? Actually, yes.

Suppose you have a game board with red, blue and yellow pieces and red, blue and yellow squares. Each piece is worth one point when it’s on a colored square or four points when it’s on a square of its own color. If a red and a blue piece are on a blue and a red square, respectively, it’s in both players’ best interests to trade. Each of them loses a point for vacating a colored square, but gains four points for taking a square of their own color, for a net gain of three points. 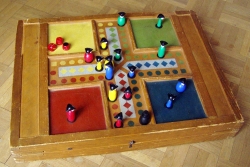 A move that makes everyone better off and nobody worse off is called a Pareto improvement move. It’s named after the Italian economist Vilfredo Pareto, whom business types might recognize from the Pareto principle, commonly called the “80/20 rule.” It doesn’t get much use in board games as described above, since most games have competing players. But it’s very useful in describing cooperative exchanges in economics.

Suppose I’m Gale Hawthorne and I have a freshly killed squirrel. My friend the baker has a freshly baked loaf of bread. I have lots of squirrels and can easily get more by hunting, so the loss of one squirrel doesn’t diminish me too much. The baker stands in front of an oven all day and churns out bread, so giving up one burnt loaf isn’t a big imposition. I don’t get much fresh bread and he doesn’t get much fresh meat. If we trade a squirrel for a loaf of bread, we’re both better off: we both have something that’s hard for us to come by and have given up something we have easy access to. This is a Pareto improvement and we both walk away satisfied. I take the loaf back to my friend and Platonic love interest Katniss for lunch.

It’s worth noting that, unlike the stores in video game RPGs, this exchange won’t work exactly the same way every time. If I show up at the bakers with twenty dead squirrels, he might not give me twenty loaves of bread. Each loaf of bread he trades away puts him a little closer to running out, and each new squirrel he eats is a little less satisfying. Here we get the notion of diminishing marginal utility. I will probably only trade squirrels for loaves until the utility I get for one more loaf just barely exceeds the utility I give up for losing one more squirrel. 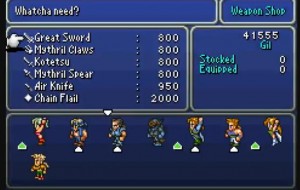 How bad can things be in the Empire when there's an INFINITE supply of Kotetsu?

(Some economists like to plot out diminishing marginal utility on a chart and give utility an arbitrary value in “utils.” So the first loaf Gale acquires is worth 100 utils, while the second one is worth 90, the third worth 70, and so forth. I don’t like doing this because no human being actually thinks this way, unless they’re an economist. Most of us just go around with an instinctive sense of when we need more bread and when we have enough. That’s good enough for me, although that might explain why I dropped out midway through the grad school application process and contented myself with a B.A. in Economics. I’m talking about “me, the author,” at this point, not “me, Gale Hawthorne, dreamy and brooding love interest of Katniss Everdeen”)

Pareto improvements are great because both parties are better off. We’ve had nothing more than an exchange of products from one side to the next, but we’re both happier. When everyone within a closed set has made exchanges such that no more Pareto improvements are possible, the outcome is said to be Pareto-optimal. Now obviously, we’ll never reach a point in the real world where no further improvement in material circumstance is possible. New people enter the world every day and disaster strikes us at random. But it’s a desirable goal.

It’s easy to see how Pareto improvements apply to exchanges of goods. But labor is a good as well, perhaps one of the most important goods there is. You can’t have a Pareto-optimal outcome (or even approach one) without being able to exchange labor as freely as you exchange goods.

The state of Panem seems to be doing their damnedest to prevent Pareto efficiency. They forbid any sort of trade between districts. All the coal that District 12 mines gets loaded onto trains and shipped to the Capitol, presumably to be distributed from there to other Districts. And someone who’s born into District 12 can’t trade their valuable skills – their labor – with people from other Districts. By creating impermeable borders and preventing migration across them, Panem is doing its best to keep its people poorer.

Is this deliberate or accidental?