Breaking Bad, like AMC’s other flagship series Mad Men, has always been about the cost of the American Dream. Bryan Cranston plays Walter White, a man who will do anything to provide for his family. The twist is that he will literally do anything, including but not limited to cooking crystal meth, murdering rival dealers and lying to the family he’s protecting. What motivates him is not love of his family – he’s fond of them but not exactly devoted – but the pride that comes from being paterfamilias. But so long as he can cling to ostensibly noble motives, he can justify anything he does. This is what makes him an anti-hero rather than a hero.

(A hero is someone who does the right thing in the right way for the right reason. For an anti-hero, pick two out of three)

The American Dream is that anyone can make it, provided they work hard, stick up for themselves and do the right thing. Breaking Bad tests that myth by picking apart the cost of Walter White’s hard work and pride. We’ve seen that play out already in Seasons 1 through 3, as Walter goes from shock at what he’s capable of (“Heisenberg”) to a grim, pathetic self-destruction (grabbing his junk and screaming at his wife’s message on the answering machine). But these could be written off as minor quirks in character, or at worst the tragic flaws of our hero. Sure, he’s a little nasty and can come off as cold, but he’s clawing his way to the top. Once he reaches the head of the table, his past can be forgiven, right?

Season 4 has been about proving one thing: Walter White can never reach the head of the table. He will never advance from labor to management.

Every work of art is a product of its time. While contemporary themes can’t be read into every story, an obvious parallel should be pointed out when it appears. In that light, it’s no accident that Season 4 was produced (and aired) during a period that’s been pretty rough for American labor. Growing unemployment, the Wisconsin teacher’s strikes, and the ongoing “Occupy Wall Street” marches are all signs and symptoms of labor unrest in this country.

The labor connection in S4 becomes clear starting with the first episode. It starts minutes after the explosive climax of S3, with Jesse Pinkman being dragged into the meth superlab. Walter’s already there. The two of them wait, helpless, while Victor begins the day’s cooking. Their one marketable skill is no longer unique. They’ve been outsourced. A younger go-getter, someone who embraces the organization’s values wholeheartedly, has replaced them.

When Gus shows up, Walter begins negotiating with him.

All right, let’s talk about Gale Boetticher. He was a good man, and a good chemist, and I cared about him. He didn’t deserve what happened to him. He didn’t deserve it at all. But I’d shoot him again tomorrow, and the next day and the day after that. When you make it Gale vs. me, or Gale vs. Jesse, Gale loses, simple as that. This is on you, Gus. Not me, not Jesse. Gale’s death is on you.

Gus, we’re here. C’mon. Let us work. […] Gus, you do this … all you have left is an eight million dollar hole in the ground. This lab, this equipment is useless without us, without Jesse and myself. You have no new product, you have no income. Your people up there will not be paid. Your distribution chain collapses. Without us, you have nothing. You kill me, you have nothing! You kill Jesse, you don’t have me.

You won’t do this. You’re too smart. You can’t afford to do this. Please … let us just go back to work. We’re here. Let us work. We’re ready to go to work! We’ll just pick up right where we left off.

Walter is, like about 20% of the American working population at the time of this writing, temporarily unemployed. It’s not because he’s lazy or a bad worker. He genuinely wants to work. He’s pleading with Gus to come back to work. In fact, he has engineered circumstances such that Gus is compelled to rehire him. 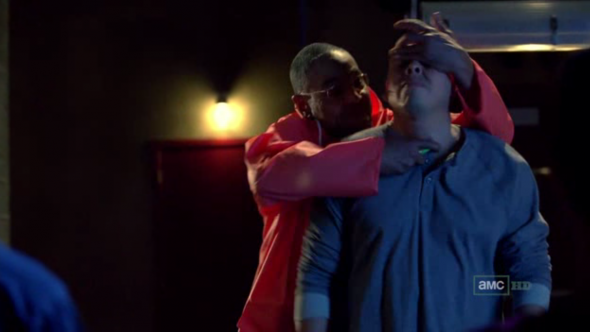 Get back to work.

As a bit of dramatic television, it’s brutal and stunning. But let’s reframe it as a negotiation between labor and management.

When Gus slits Victor’s throat, he’s pursuing a commitment strategy. Commitment is the key to achieving credibility, which in turn makes you a more effective negotiator. Avinash Dixit and Barry Nalebuff, in their classic Thinking Strategically, describe the importance of commitment:

Credibility is a problem with all strategic moves. If your unconditional move, or threat or promise, is purely oral, why should you carry it out if it turns out not to be in your interest to do so? […] An action that can be changed loses strategic effect against a rival who thinks strategically. He knows that your utterances may not match your actions and so is on the lookout for tactical bluffing.

[One method] is to change the game to limit your ability to back out of a commitment. […] The most radical [method] is simply to deny yourself any opportunity to back down, either by cutting yourself off from the situation or by destroying any avenues of retreat.

Gus murders Victor to demonstrate his commitment. He and Walter are in a negotiation: will Walter keep working for Gus or will Gus kill Walter? Or at least that’s what Walter thinks the terms of the discussion are, hence his efforts to prove both how valuable and how reasonable he is.

Gus, with one vicious slash, completely changes the terms. Implicit in Walter’s offer to keep working for Gus is the idea of working freely: entering an employment contract, exchanging labor for payment, and leaving once the term is up or if conditions grow unsatisfactory. By killing the only other person who can cook Walter’s recipe, Gus has rejected Walter’s offer. Walter can’t leave. The only person who can cook meth to Gus’s standards, now that both Gale and Victor are dead, is Walter. And Walter knows that Gus won’t let his business go without meth. So leaving is no longer an option. Walter is no longer working as a free agent.

The question isn’t can Walter work? but can Walter quit? Gus has burned his bridges. He is denying himself any other potential employees but Walter. Gus doesn’t want the meth. Gus wants Walter.

This is the relationship between labor and management as depicted in S4 of Breaking Bad. They’re not two parties who negotiate freely and as equals. Labor works for as long as management wants them and is then cast aside. If fired, labor can’t simply find employment elsewhere, because labor has too refined of a skill set to change careers. Management owns the capital, has the contacts and controls the purse strings. Management is in charge.