Walter engineered the desperate gambit at the end of S3 (“Full Measures”) as an attempt to put himself in charge. He spends most of S4 trying to convince himself that he’s in charge, or that he could be. But every time he tries to act like he’s in charge, he’s reminded – either through visual cues or the machinations of others – that he’s not.

In S4E2 (“Thirty-Eight Snub”), Walter steels himself to kill Gus. He buys an illegal .38, practices with it, then drives to Gus’s house. He takes a moment in the car to psych himself up, signified in the show by the music mounting to a terrifying pitch. But then everything cools down as soon as Walter dons the black hat, becoming Heisenberg again. 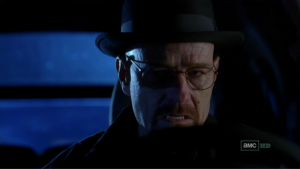 Walter gets out of the car and walks toward Gus’s modest suburban home. The camera tracks tight on his head throughout. As the audience, we’re ready for some quirky cinematography from our favorite drama. Maybe the camera will stick with Walter throughout, until … 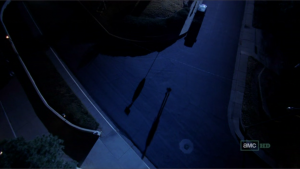 Who are you talking to right now? Who is it you think you see? Do you know how much I make a year? I mean, even if I told you, you wouldn’t believe it. Do you know what would happen if I suddenly decided to stop going in to work? A business big enough that it could be listed on the NASDAQ goes belly-up. Disappears! It ceases to exist without me. No, you clearly don’t know who you’re talking to, so let me clue you in. I am not in danger, Skylar. I am the danger. A guy opens his door and gets shot and you think that of me? No. I am the one who knocks.

After delivering this speech, Walter does what every criminal mastermind would: stammers a bit, wanders to the bathroom, peels off his shirt and takes a shower. The speech, please note, has the exact opposite effect of what’s intended. Instead of reassuring Skylar that Walter is in complete control and that she has nothing to fear, it provokes a fresh wave of fear in her and nearly drives her to another state.

All right, forget actions, forget words. What about an empty gesture? Can Walter prove he’s in charge by doing something every action movie hero does: walking away from an explosion? (S4E7, “Problem Dog”) 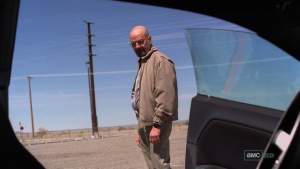 By the way, you look fantastic 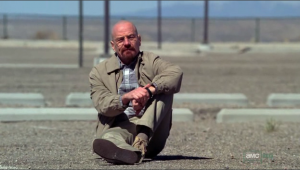 In your boots of Chinese plastic.

This entire season has been about Walter coming to grips with the fact that he can not be in charge. He can’t take a seat at the head of the table. He isn’t a badass or a natural leader or a businessman. He only gets Jesse to do what he wants by haranguing Jesse with pedantic verbal abuse until the boy caves. And Jesse goes along with it because that’s what he was born to do. He’s a natural pawn.

Jesse got into his current mental state by being manipulated into doing Walter’s dirty work for him at the end of S3 (“Full Measures”). The plan was always for Walter to kill Gale, not Jesse, but that plan fell through when Mike got the drop on them. So Jesse had to kill Gale to save Walter’s life.

Throughout S4, Jesse lives up to the same role. He becomes a pawn in Gus’s plan to free himself of Walter. Gus uses Mike to build up Jesse’s confidence (S4E5, “Shotgun”). Soon, Jesse becomes a trusted member of the organization (S4E6, “Cornered”) and later, a key part of Gus’s revenge on the cartel (S4E10, “Salud”). Jesse is rising through the ranks, but it’s as a skilled worker, never as management or even owner. His skills are valued; his opinions, never.

We get this visually reinforced in the front half of the season through something I like to call “ToolCam.” ToolCam was first introduced in the bottle episode “Fly” in S3. A small camera (probably a GoPro HD), mounted on the end of a brush, gave a jarring view of a lab implement being cleaned.

ToolCam returns in two episodes in S4. First, in S4E2, “Thirty-Eight Snub,” the camera is mounted on a Roomba as it crawls through Jesse’s debauched apartment. The Roomba bumps and whirs through stacks of sleeping druggies until it reaches one conscious spaz. He promptly picks it up and starts trying to disassemble it. 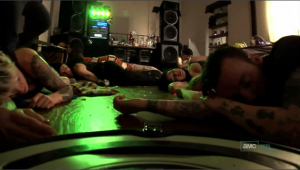 The other time is in S4E6, “Cornered,” where Jesse helps Mike track down some hijacked meth. To lure a tweaking addict out of his house, Jesse grabs a shovel from Mike’s car and goes to dig in the lawn. The ToolCam is mounted on the blade of the shovel. It bobs along behind Jesse’s head as he carries it across the street, reversing toward Jesse’s face as he prepares to dig. 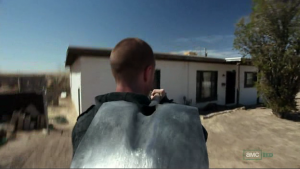 (We also get a reverse perspective, mounted on the video game gun Jesse uses, in S4E4, “Bullet Points”)

Both these images give us a perspective on what it’s like to be a tool: an implement in the hands of a skilled user. It’s no coincidence that both times the tool is in Jesse’s possession: once in his house, once in his hands. Jesse is a tool himself. He’s a pawn of the men around him. That’s the saddest part of the Jesse Pinkman tragedy: that Jesse is going to be used, then cast aside, for no crime other than being conveniently at hand.

Jesse is a tool and Walter is a laborer. Or rather, Jesse is a precision lathe and Walter is a skilled lathe operator. Both are essential parts of a competitive manufacturing process. But they’re disposable if the bottom line gets in the way.

S4 has been about both Walter and Jesse realizing their status in that way. Jesse makes the realization first, and the revulsion that grips him throughout the season is the result. He tries to drown his despair in gross sensation – lights, noise and touch in high quantities – but gets nowhere. He returns to his counseling group but can’t get the judgment he wants. He’s rusting away until someone picks him up, polishes him off and starts putting him to use again: first Mike, then Gus, then, by S4E12, Walter once more.

Walter denies his status for longer than Jesse does. He tries to make a deal with Mike, appealing to his fear of Gus, but to no avail. He tries outsourcing his cleaning work to a few laundromat employees, but ends up costing them their jobs. It’s not until he’s in the desert with a bag over his head that he realizes he isn’t the boss. He’s never going to be the boss. He’s the one on his knees, not the one standing.

So what’s his solution? To bring down the company entirely. 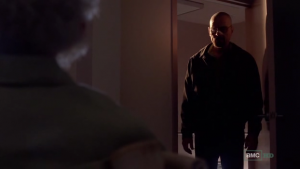 Any second thoughts? Then let's get to work.

Walter engineers his strike on Gus in S4E12 and E13 not because he wants to sit at the head of the table. Those days are beyond him. Walter no longer wants to become management. He wants to live in a world without management. Whether this means he wants to produce and distribute meth on a local scale again – a sort of anarcho-syndicalist co-op – or whether it means he wants to quit the industry entirely, we can’t say yet. We’ll have to wait until S5 to find out.

But Walter clearly does not mean to take over Gus’s operation. He not only kills Gus and his bodyguard Tyrus, but he kills them in a public manner that links Gus, and his entire business, to the Mexican drug cartels. He then shoots Gus’s last two remaining henchmen and, with Jesse’s help, burns down the entire drug lab. Gus’s operation is now torched, scattered and under a DEA microscope. Walter’s days of taking charge of the operation are over. 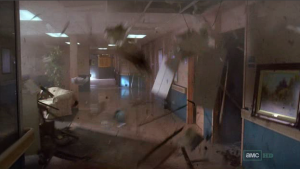 Could have picked a different screencap. Didn't. You're welcome.

The crises and story arcs of the earlier seasons of Breaking Bad were personal and familial. They depicted people grappling with inner demons, or balancing their duty to their families against their own desires. S4 takes this a step farther out and depicts the battle between the worker and the owner: labor vs. management. Does it pick sides or pass judgment? At the end of S4E13 (“Face/Off”), labor is the only side left standing. But labor has had to do some pretty despicable things, including poisoning a child, to get to that point. And given the number of deaths involved, you might not call the outcome a victory, even if Walter does.

So where does that leave us for S5, the final season?

Hank’s theories about Gus Fring have been vindicated by Gus dying with the last surviving member of a Mexican drug cartel. The connection between Fring and the meth trade is now indisputable. Given Hank’s tenacity when he had only a hint to go on, we can be sure that Hank is now going to cling to this investigation until every possible question – including the identity of Heisenberg – has been answered.

Gus’s death takes the threat off of Walter’s head, but only for the time being. There’s a reason the cartel assassin didn’t shoot when he had Gus in his sights and it’s probably the same reason the cartel killed Gus’s partner, instead of him, thirty years ago. Gus’s still undocumented past in Chile has been protecting him. Unfortunately, neither Walter nor Jesse know anything about it. So any repercussions that bowl them over will come as a surprise.

And oh yeah, Mike’s still out there.

The first few seasons have been about man vs. his internal demons. Man vs. his family. Man vs. his masters, here in S4. The scale has gradually grown wider, encompassing more and more of the world. Each season, Walter and Jesse have triumphed, but at an ever-increasing cost.

Given the forces in play, S5 will be about man vs. fate. And this is a battle that Walter might not win. 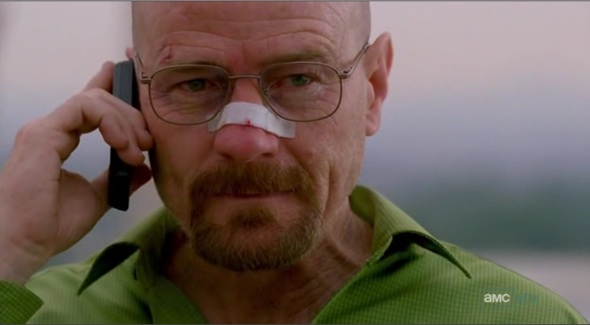