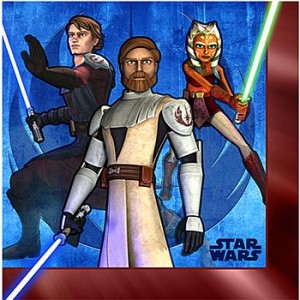 I’ve written about the strangeness of Cartoon Network’s The Clone Wars before. This is a kids adventure show about a massive interstellar war in which one person is secretly controlling both sides for personal gain, and it’s going to end with the good guys all getting slaughtered by their own troops. Take a look at this napkin I saved from my kid’s birthday party. The guy on the left kills a bunch of children. The one in the middle cuts off three of his best friend’s limbs and leaves him to burn to death. The one on the right almost certainly doesn’t make it to her sixteenth birthday party. This is the paradox of The Clone Wars: it’s an upbeat story embedded smack in the middle of a tragedy. You’re supposed to root for the Jedi to crush those roger-rogers, and forget about how completely meaningless the whole thing is in the context of Episode III.

But let’s focus on the clones themselves. They fight for the Jedi, which makes them the good guys. My son often pretends to be Commander Cody, a leader clone. However, the idea of genetically engineering a clone army is ridiculously unethical. Think about it: the Republic happily orders up millions of clones to be used as slave labor, the exact same way the Separatists are churning out battle droids. The clones’ growth is artificially accelerated, so they can be cannon fodder after only ten years of non-stop combat training. As one of the Kamino “cloners” explains in Episode II:

You’ll find they are totally obedient, taking any order without question. We modified their genetic structure to make them less independent than the original host.

This is horrifying stuff. But the Jedi, as far as I can tell, have no qualms whatsoever about leading this army. In fact, they make an implied choice to use clones over drones. The Kaminoian puts it this way:

Clones can think creatively. You’ll find that they are immensely superior to droids. 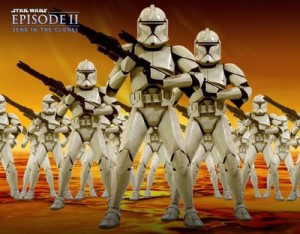 So let’s get this straight. Presumably, the Republic has the resources to build its own robot fighters. But humans are better fighters than robots, so the Republic chooses to use clones, genetically engineered to have limited free will. This allows them to avoid a draft, which would be politically tricky. And they then dehumanize their clone army by making them wear helmets at all times. In any other work of science fiction, this clone army would be terrifyingly evil and tragic, not plastered all over paper plates for birthday parties. In fact, let’s go ahead and list works of fiction involving human cloning now.

And what have we got for movies in which cloning is good?

The bottom line is that in almost ALL the works of fiction I can think of, the people who clone people are the bad guys. (For instance, Dimension Films bought up the rights to the not-yet-released-how-to guide How To Defeat Your Own Clone.) And not just in fiction: the United Nations has denounced human cloning too. You can argue that “a galaxy far far away” isn’t earth, and the people of the Republic just don’t share our taboo against cloning, but I’m not buying it. They share every other value of Western civilization, like monogamous marriage, democracy, and a hatred of Jar-Jar Binks. It’s hard for me to accept that the Jedi, who are part of a religion that celebrates the energy field created by all living things, are behind this clone army. They just don’t see anything wrong with it.

To be fair, the show does occasionally deal with this elephant in the room. In season 3, the show set an episode on the cloner planet of Kamino, where a Jedi is overseeing the training of the next batch of “recruits.” This character becomes uneasy with treating living things like machinery. But Dion Detterer, who writes an excellent blog about the philosophical side of Star Wars, sees the hypocracy in this:

It doesn’t really matter if the Jedi consider the clones to be living beings worthy of respect; as soon as they signed-on to use people as property and slaves—as soon as they implicitly gave the nod to breeding humans for war—they acknowledged that, in some cases, living beings were objects, and any compassion shown was more to reassure their own guilty consciences than for the benefit of men bred to die.

Although there are these occassional half-hearted nods at treating the clones with respect, they’re very clearly second class citizens. “Yes, clones you may be,” Yoda tells his troops, “but the Force resides in all lifeforms.” That’s just a tad condescending, right?

But hey, just because the Jedi have no problem using clones doesn’t mean the audience has to feel the same way. If we are uncomfortable with the clone troopers, maybe that’s a feature, not a bug. Perhaps the Jedi are wrong to use the clones, and it’s meant to be another sign of how far the Order has fallen. Years later, when Yoda tells Luke, “Luminous beings are we, not this crude matter,” perhaps he’s thinking about all the thousands of clones he treated exactly like crude matter.

Besides, the clones are clearly NOT supposed to be completely benevolent. They are only fighting for the Jedi because Palpatine tells them to fight for the Jedi. When I think about A New Hope, I have no trouble believing that all those faceless storm troopers were grown in a vat. They literally address each other via serial numbers: “TK-421, why aren’t you at your post?” In the original Star Wars trilogy, the individuality of the rebels stands in stark contrast to the storm troopers, little white cogs in a soulless machine. The retcon that made a lot of them clones was actually a clever piece of plotting by George Lucas (he does that on occasion).

But how can we get behind the clone troopers, who are the exact same cogs in marginally different armor? You can’t watch The Clone Wars and not root for them. But in order to root for them, you need to forget where they came from (monstrous genetic engineering) and where they are going (killing all the Jedi). You need to accept that, on this particular day, in this particular battle, we want the clones to win. That brings me back to the show’s lack of dramatic irony. If you see it in context, the cognitive dissonance is hard to get past. You need to just, well, underthink it.

The really disturbing part is, George Lucas uses the clone troopers, meta-textually, for the same reasons the Republic uses them. The clone troopers are better from a storytelling perspective, because they’re kind of human and thus relatable. That is, in a fight between robots and clones, the audience is on the side of the clones. But clones are also superior to putting actual humans on the battlefield, because their deaths don’t mean that much. A war show where thousands of regular people died might be too intense for Saturday morning. But The Clone Wars can depict scores of troopers getting blown up, and no one really cares, precisely because they’re seen as less than human.

Let me put it this way: if you ask a five-year-old about the clone troopers, he will tell you they are KIND of like people, but not quite. (Believe me, I’ve actually had this conversation.) And that, my friends, is precisely why human cloning is so dangerous: it makes life a little less special. I would think the Jedi, of all people, would be against that.

UPDATE, 8/6: Guys, really enjoying the comments, but a LOT of you are saying things like, “But of course the Jedi didn’t actually ORDER the clone army.” But the Kaminoans says themselves that the clones were ordered by Master Sifo-Dyas, and that’s canon. Sure, Count Dooku kills off Sifo-Dyas and takes over, but it was a Jedi’s idea to create the army in the first place. If this seems strange, that’s because in earlier drafts of Attack of the Clones, Sifo-Dyas was supposed to be an alias for Sidious (a very poor alias). But Lucas rewrote that and made Sifo-Dyas a bonafide Jedi.

Which raises another point that I think is worth remembering: George Lucas is not particularly good at plotting stuff out. It’s very interesting to speculate on why the Jedi use clones: a different value system, a feeling that it’s the lesser of two evils, etc. But the real reason is probably that the Trade Federation was already using robots, and there had to be something called the Clone Wars, so Lucas had to make the Jedi use clones. Whether of not it’s something that the Jedi would logically do is beside the point. But hey, there’s nothing wrong overthinking the implications of something, even if we suspect the author didn’t do so himself.

60 Comments on “The Bioethics of The Clone Wars”