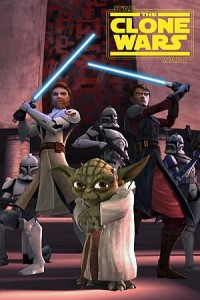 On the surface, Cartoon Network’s smash hit Clone Wars is a breezy little space adventure. Obi-Wan, Anakin, Padme, and the rest of the prequel pack (yes, even Jar-Jar) zip around the galaxy, taking out hordes of bumbling robots and crossing lightsabers with a series of snarling bad guys. Everyone is constantly in danger, but nobody ever gets hurt, and the good guys inevitably save the day while learning valuable life lessons. Even though there’s a massive interstellar war raging, the tone is doggedly upbeat. In other words, this is a high-tech version of G.I. Joe, Thunder Cats, Transformers, or any of those other boy shows we enjoyed with our Rice Krispies back in the 80s.

However, when you consider the series in the context of Episodes II and III, everything changes. The Clone Wars suddenly seems darker than the inside of a Sarlacc. In fact, it seems almost cruel to market it to eight-year-olds.

Here’s the key thing to remember about the galactic conflict known as the Clone Wars: they are a complete and utter farce. Palpatine is literally controlling both sides: he commands the Republic’s clone army as Supreme Chancellor, and he leads the Separatist’s droid army as Darth Sidious. The sole reason for the war is to solidify Palpatine’s political power, and to keep the Jedi bogged down in a bunch of totally meaningless battles. 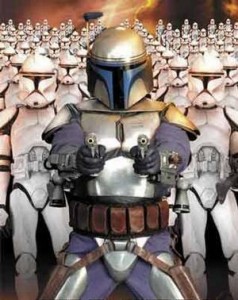 Someone should really ask more questions about where this giant army came from.

(Side note: I will never understand why the Jedi are too dumb to realize they’re being set up. In Episode II, Obi-Wan investigates an attempted assassination, which leads him to a planet of “cloners.” He’s surprised to discover that these people have spent years making a clone army supposedly for the Jedi. That’s kind of suspicious, right? But at the end of the movie, the Jedi happily take command of this army even though no one has any clue where it came from. I mean honestly, how dumb are they? Over the three years of the Clone Wars, they can’t even send one measly accountant to figure out who paid these cloners 80 trillion dollars to build an entire army? Not to go off on a rant here, but the fact that the man who the clones were cloned from tried to kill Obi-Wan and had to be decapitated by Mace Windu should have been a red flag that, gee, maybe we need to figure out where all these goddamn clones came from before we just take them home. Anyway…)

The Clone Wars are not the epic struggle between good and evil the cartoon makes them out to be. They’re not even a real conflict. To the people fighting them, they’re real enough, but there aren’t even two sides; just a single commander, ordering his troops to attack each other. Imagine if Gargamel was secretly working for Papa Smurf.

Like I said, this is dark, dark stuff. But that’s not the half of it.

The Jedi lose the Clone Wars, bigtime. They not only don’t defeat the robot army, they are all killed. By their OWN TROOPS. Consider that for a moment: this is a show for children about a war which will end with the good guys getting shot in the back by their own soldiers. The fact that a lot of the young fans might not know that doesn’t make it better; arguably, it makes it worse. 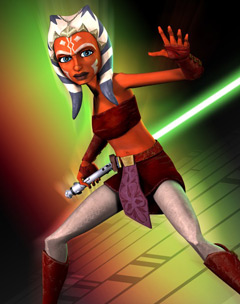 Once you know the disastrous conclusion of the Clone Wars, it’s hard to look at the TV show the same way. For instance, consider Ahsoka Tano, Anakin’s padawan apprentice. She calls him “Sky Guy,” he calls her “Snips.” She’s 14, and her plotlines are easy for the show’s young fans to identify with (she loses her lightsaber, and scrambles to get it back before Anakin finds out). All in all, not a bad role model for Star Wars-loving little girls, who finally have a female Jedi to root for. And she makes a cool Halloween costume!

And speaking of female role models, there’s Padme. On the show, she’s a wily diplomat who easily out-negociates the male politicians. When that fails, she’s not shy about pulling out a blaster and kicking some robot ass. But even during the events of Clone Wars, it’s possible that she’s already pregnant with the twins that will eventually kill her. After her husband crushes her windpipe.

And what can you say about Anakin? The hero of this show is only months away from slaughtering all those children in the Jedi temple. Children the same age as the show’s fans. 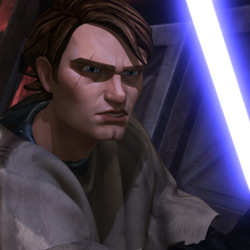 Our hero? I guess? Kind of?

Keep in mind, this show premiered well after Episode III. The creators knew the context of the Clone Wars and the fate of their characters very well. And yet they still decided to push ahead and create a series about the Jedi fighting a sham war, which will end with them being massacred by their own troops. (As I watched, I found the constant presence of the clone troopers fairly creepy. They’re supposed to be the good guys in this context. But they’re also the exact same people who will kill the Jedi and become the storm troopers.) I’m trying to think of what I can compare this TV series to that captures the dramatic irony. Imagine if there was a cartoon about Macbeth, Thane of Glamis, fighting bravely alongside his best buddy Banquo and King Duncan, in the days right before the play begins. But honestly, that only captures half the irony of Clone Wars, because in Macbeth’s case at least they were at war against a real enemy. In Clone Wars, not only is the eventual outcome horrible, but the war itself is a joke.

But then, I came up with an analogy that not only works, it actually made me reconsider whether Clone Wars is dark at all. 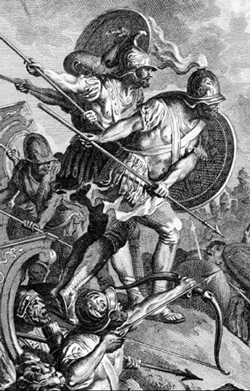 The Clone Wars is like The Iliad. Think about it: the Trojan War is pretty pointless too. The two armies spend ten years fighting over a woman. Plus, they’re constantly being manipulated by the gods, who have predetermined the outcome. And like the Clone Wars, almost all the heroes are heading for tragedy. Achilles dies after the poem. Ajax goes insane and kills himself when he is denied Achilles’ armor. Agamemnon is stabbed by his own wife as soon as he returns home. Odysseus has to wander around the Mediterranean for another 10 years. In The Iliad, almost nobody gets a happy ending.

But does that make The Iliad pointless? Hell no. I think one of the major points of The Iliad is that fighting in the great Trojan War is an end unto itself, the greatest glory a man could hope for. In fact, dying in a truly great battle is better than living through it. It’s our ability to die, and face that death with open eyes, that separate men from gods.

Bear with me for a sec.

Pre-Clone Wars, the Jedi are truly godlike. They live in a high tower in a shining city. When they venture out, they often disguise their true identities. They can effortlessly take on scores of ordinary men, perform superhuman feats of agility, and even control people’s minds. More importantly, they are basically unkillable. Oh, sure, I bet the occasional Jedi gets taken out by a lucky shot or crazy monster. But there hasn’t been a Sith in over a thousand years, and it’s a good bet most non-Sith don’t want to tangle with them. I’m guessing that pre-Clone Wars, being a Jedi was a very safe job. For the most part, you were just a diplomat and a priest. 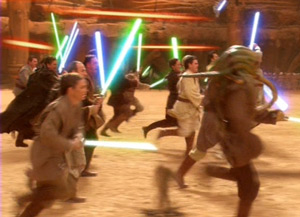 Boldly they rode and well, Into the jaws of Death, Into the mouth of Hell

But at the end of Episode II, the first shots of the Clone Wars ring out, and something shocking happens: Jedi die. A lot of Jedi die. And by the time the Clone Wars end, they’ll basically all be dead. In one respect, this is a tragedy. But if you look at it from an Iliad perspective, these deaths are necessary. It turns the Jedi from gods to men, and only after they are mortal can they be heroes.

There is a big difference between Qui-Gon and Luke. In Qui-Gon’s time, the Jedi were untouchable and all-powerful. Qui-Gon is killed in the line of duty, but that was totally unexpected. In Luke’s time, the Jedi are on the verge of extinction, so when Luke decides to become one he’s choosing danger, sacrifice, and possible death. The key moment in his arc is when he tosses away his lightsaber and tells the emperor “I am a Jedi, like my father before me,” knowing full well the emperor is probably going to kill him right there. Like the Greeks in the Iliad, it’s the fact that he accepts this risk that makes him greater than a god.

So maybe the fact that the Jedi will all die at the end of the Clone Wars doesn’t make the TV show dark. It’s because the stakes are life and death that the fighting is meaningful. Yes, the conflict is completely manufactured by the Sith. But that big-picture stuff doesn’t matter–even within the show, nobody really explains or cares about what either side is fighting for. What matters is the courage and skill that these characters display in the face of death. (Even though no one actually dies, people almost die in every episode.) The ultimate victory (or lack thereof) is beside the point. The show is called Clone WARS. It’s a celebration of the fight, not the outcome.

When I watched another episode of Clone Wars with The Iliad in mind, it was a new experience. Knowing that all these Jedi were on the verge of annihilation was sad, but it also made their ephemeral triumphs that much sweeter. This show is about one final Indian summer during which the Jedi sat astride the galaxy in all their glory, before they were swept away in a single afternoon. And like The Iliad, the show seems to say that these characters only attain true greatness in the context of their violent ends. After all, death comes to everyone… but not everyone gets to die in the great Clone Wars.