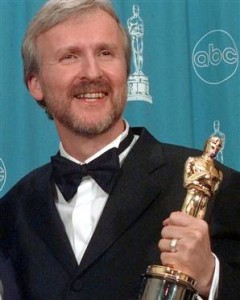 King of the World.

Recently, Fenzel spelled out Five Reasons Why Avatar Will Suck. I want to add one more. Every article that I’ve read about the movie waxes poetic about how Cameron has been given carte blanche to pursue his vision. He’s spent almost four years in production, and more than 300 million dollars. He even invented his own camera. This is a man with unlimited resources and total creative control. That makes me very nervous.

This may seem like a strange thing to say. Don’t we all agree that in a perfect world, all artists should have unfettered freedom? You don’t want gallery owners telling Picasso how to paint, or concert hall owners telling Mozart how to compose. And when it comes to artsy filmmakers, I completely agree. By all means, write Paul Thomas Anderson a blank check and leave him the hell alone.

But while Avatar is certainly art, it’s entertainment first and foremost. It’s a blockbuster, the most tricky of all genres to nail. Every year, there’s a handful of amazing dramas and hilarious comedies. But making a movie like Independence Day is subtle pop culture alchemy. How many awesome blockbusters has 2009 given us? I’d argue Star Trek, and that’s it. (And while Star Trek was fun, I don’t think it’s on the same level as The Dark Knight.) 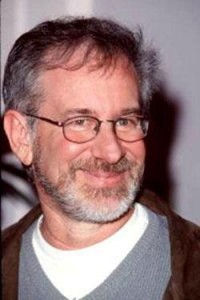 Can't get his pet project funded. I'm not kidding.

To understand why Avatar worries me, you have to understand how rare Cameron’s level of absolute, godlike, no-questions-asked control is. For instance, many people assume that Steven Spielberg can go out and make any movie he wants. But back in February, The Big Money reported that he couldn’t find anyone to fund a Lincoln biopic he’s been cooking up.

Think about that: Steven Spielberg simply cannot get his movie off the ground. And it’s not a fluke thing.

The most recent issue of Esquire reports on Ryan Kavanaugh, a 34-year-old venture capitalist whose company is funding about 35 movies in 2010. The article begins with director Ron Howard waiting outside the guy’s office to ask for money. Just because Frost/Nixon was a success does not mean that people are rushing to finance Howard’s next project. Even for A-list directors, getting a movie greenlit can be tricky. Getting a massive blockbuster greenlit is even harder.

And even when they get the go-ahead, it doesn’t mean they call all the shots. They have limited budgets. They have producers calling in daily to discuss the rushes. They have demanding stars with massive egos.

James Cameron has been a pretty powerful guy for his whole career, but that doesn’t mean he hasn’t had to deal with nervous and demanding studio executives. His battles with Fox during the Titanic shoot are legendary – at one point, he gave up his own salary to keep production going.

But as he himself memorably put it, Titanic’s success made him King of the World. I can only think of a few cases in recent history where a director had this kind of clout… and they didn’t end well. 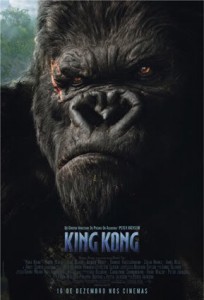 After co-writing, directing, producing, and running the special effects company for the Lord of the Rings trilogy, Peter Jackson had a Cameron-level of mojo working in 2003. And like Cameron, he had a dream project that had been gestating for years. Jackson had actually shopped around a script for King Kong in 1996, which had the misfortune of landing on everyone’s desks right after Godzilla bombed at the box office. After the epic success of Rings, it didn’t surprise anyone that he signed a deal to make Kong (which made him the highest-paid director in Hollywood history).

I don’t want to suggest that King Kong is a terrible movie. I like it. If it were on right now, I’d say, “Ooh, King Kong. I like that movie.” But the movie is three hours and seven minutes. That’s almost twice the length of the original, which shares virtually the same plot. This isn’t an epic like Lord of the Rings that needs that kind of sprawl; it’s a simple, straightforward adventure movie. Three hours is too long, no matter how good each individual scene is.

We don’t even see Kong for seventy minutes. Those of you who know about the Ghost Ship Moment understand that this concerns me.

I think it’s a fair assumption that if it had been any other director besides Jackson, the studio would have insisted on a more bladder-friendly running time, and they would have been right. And the New York Times reported that in the end, Peter Jackson put up millions of his own money to cover the additional expense. You die-hard King Kong fans can argue with me, but I think all he did was buy enough expensive celluloid rope to hang himself with. The movie would have been better off shorter.

But even putting aside the running time, I’d argue that Peter Jackson could have done better with a little more studio pressure… because I’ve read the 1996 King Kong script. It’s available online here, and I think it’s better.

Quickly: how does the 2005 King Kong begin? Can you remember? Well, the 1996 script begins with a sensational dogfighting sequence set in World War I, introducing Jack Driscoll (the Adrian Brody character) as a young pilot. The scene does more than start the movie off with a bang – it establishes a couple important things about Driscoll’s character. And more importantly, it establishes he can fly a plane, because in the final reel, he steals an aircraft to try and protect Kong. In the 2005 Kong, Adrian Brody barely has anything to do in the last third of the movie. Having him jump in a plane seems much more satisfying. It also gives Ann Darrow a reason to take him back; he redeems himself for his part in Kong’s capture.

In a lot of different ways, the 1996 screenplay just works better. For instance, in the 2005 version, it is never made clear how the film producer (Jack Black) gets his hands on a map to Skull Island. He just shows up in his first scene waving it around. This is kind of a huge plot hole. And even if you buy this, why exactly is he looking for this uncharted island anyway? All he needs is a jungle to film an adventure screenplay he already has. The whole journey seems forced.

In the 1996 screenplay, the producer isn’t trying to make an adventure story – he’s a Ripley’s Believe It Or Not-style documentarian, hacking his way through jungles in search of beautiful bare-breasted natives he can film, always putting himself front and center. In this version, it makes perfect sense that he’s trying to find this mysterious island – that’s what he does. (Ann, by the way, isn’t an actress. She’s the daughter of a famous archeologist that Denham ripped off.)

The 1996 screenplay is faster, tighter, and more fun. No pointless monologues about Heart of Darkness. This was before Jackson had been nominated for an Oscar, and he wasn’t taking himself too seriously. More importantly, when Jackson sat down to write the 2003 screenplay, he knew it was getting made. He didn’t have to please anyone but himself. He’s a talented guy, and King Kong still has a lot going for it. Sadly, I can’t say as much for…