When Battlestar Galactica opens, the technological race of Cylons are already created, and by the Series Finale, we find Technological Life springing up again independently on Earth – 150,000 years after the last Cylons have died. There are actually four independent instances of techno-beings emerging within the BSG-universe, an odd trend of convergence in the evolution of technology. It’s as if something like Cylons always happen once technology gets going.

In What Technology Wants, Kevin Kelly discusses how physics and chemistry guide technological evolution – an extension of the process begun in organisms – along particular, recurring developmental pathways. Each advancement sets a logical stage for the next: from atoms to molecules, cells to organisms, brains to ideas, and tools to Cylons.

But before talking about Technology’s trajectory, we need a clear definition of what Kelly means by ‘Technology’ in order to understand the continuum of which Cylons are a part. Technology isn’t unique to humans. All sorts of non-human animals use the environment to create an advantage, whether it’s making shelters (birds building nests) or using tools (chimpanzees using rocks to break nut-shells). Technology isn’t just hard-stuff either, like clotheslines, since you need ideas in the first place, like hanging clothes to dry. And Technology isn’t the individual things, but one process continually expressing in many forms, like DNA.

So (1) Technology extends beyond Humans, (2) Technology stores ideas for regeneration, and (3) Technology is itself an evolving entity.

Like biological evolution, the evolution of “technology requires a sequence of developments to reach a particular stage [and] the reciprocal influence of one technology upon another” drives further complexity. An early deep-water fish may grow a few skin cells super sensitive to light. Feeling changes on the patch let’s the fish navigate up to and around the sea’s sunny surface. In the brighter and shallower depths, there’s less water pressure too and the fish may grow larger or stronger taking on different bodily structures. As the newly beneficial skin cells develop over generations, the fish (as a species, of course) develops a crude eye capable of detecting prey and predators expanding its diet and defenses. At each level the photo-sensitive skin cells do roughly the same job, yet its advantages continually accumulate, branch and drive expansions into more directions and greater complexities.

With Technology too, we find that knives not only make hunting easier but by sharpening stones you create sparks. Sparks allow control of fire which opens up the pre-digestion of food (cooking) which expands our access to nutritional material. Finding new foods gives way to recipes, and all these advances flow from the end of a knife.

Cylons stand at the frontier of this Technological evolution, or rather an enormous pyramid of pre-requisite technology. Silicon production, networked computers, University courses in Artificial Intelligence, large scale agriculture, National economies, electric grids, wage systems, medical care, water treatment plants and language education all form Kobol’s ‘pre-requisite web’ of supporting technologies which can create Cylons. Evolved interconnections and mutually supporting relationships give the technological state stability and, as with genes, deleting even one innocuous bit – say, Supermarket CheckOut Lines – could cause a disruptive cascade throughout the system’s subsequent organizational structures.

The current technological stage also gives emerging technology a trajectory, or a foundation to spring from. The Cylon Brain with its silicon pathways didn’t emerge from scratch, but was modeled on the Human Brain and the tried-and-true neural pathways ‘found out’ first by biological evolution. Likewise, it would probably be impossible for Humans to create flesh and blood Cylons before their metallic ancestors, if only because the established advances in robotics sets the stage for further learning and advances in synthetic chemistry. Rewind Earth’s tape again and again and you won’t see steam-engines before water-pumps, murder-mysteries before creation myths, or Cylons before CDs, because technological advancements must scaffold off others to go anywhere. 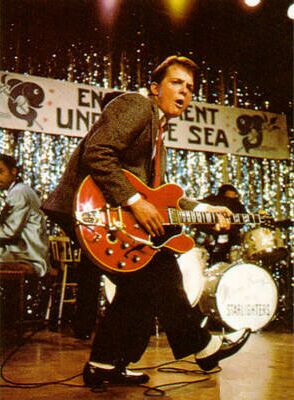 I guess the prerequisite web of blues chord progressions and hillbilly riffs haven't been established yet. But your kids are gonna love it.

Given that Technology evolves, what are the chances that human-looking Cylons would get made over and over as they do in BSG?

Other directions of life might be possible. We could imagine another species too, one Human-like with jellyish bones, but it would be contradictory to our universe – if you want to move on land, you need hard-bones to tough out the constant pull of gravity. “Our alternative imaginary universes are full of creatures far more diverse, creative, and ‘out there’ than the life here,” Kelly says, “but most of our imaginary creatures would never work… the world of the actual-possible is much smaller than it first appears.”

As Life emerges, the constraints of physics and chemistry bring ‘naturally’ convergent forms that recur independently in many species, for example; Eyes, Echolocation and Wings. So when Colonel Adama asks on new Earth, “How is that possible? Human beings naturally evolved on a planet 1 million light years away?” we can answer, ‘given an environment like Earth’s, pretty possible’. 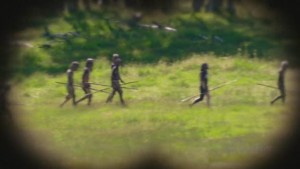 The human form on a planet like Earth is more inevitable than improbable.

We also find convergent forms as a rule in culture. Kelly points to the invention of photography and steamboats, telephones and thermometers, the discovery of adrenaline and logarithms, working transistors and computers, even genius theories like Natural Selection. All were discovered independently by multiple people converging on the same idea. All you need is the “necessary web of supporting ideas then the next adjacent technological step seems to emerge”.

When at the Series’ close we see advancements in Robotics and Artificial Intelligence flashing across the screens of Times Square – another advent of Cylons – Colonel Adama could ask, “How is that possible? Cylons naturally evolving on a planet 1 million light years away?” But we already have the evolutionary answer, ‘given an environment like the Mind, pretty possible’.

Unlike Humans, Cylons have the chance for Functional Immortality with ‘Resurrection Technology’. Rather than saving their experience through personal diaries, interviews, bodies of work, or memories made with others; Cylons directly transfer their selves into another body once reaching physical death in a persistent, unbroken chain of being. That’s new! The Cylons are also capable of directly communicating their internal, subjective experience to others via ‘Projection Technology’. Forget about music, visual arts, books and movies for conveying ideas- Projecting allows beings to share experience more directly and intimately than anything else, ever.

Which brings us to the Universal implications of Evolution, all that expanding complexity must persist in the face of Entropy. Arranged energy gives us all our forms – be it stars, oranges, babies or the Wii – but Entropy always breaks down energetic structures over time and disorder always increases, like a universal decay. The only way to keep a special state going is to bring in more energy – add wood to the fire, plug in a freezer, eat food, etc. – and, here, Evolution is masterful. Though there is a constant decrease of order universally, there is a constant increase of order locally, on Earth, with more meaningful DNA bits adding into the ‘gene pool’, more songs being recorded now than ever, more cereals varieties being produced, more lines of code needed for more complex programs and all the while energy use is going up.

There is a more precise way to say this: of all the sustainable things in the universe, from a planet to a star, from a daisy to an automobile, from a brain to an eye, the thing that is able to conduct the highest density of power- the most energy flowing through a gram of matter each second- lies at the core of your laptop. A nuclear bomb will release 1017 ergs, which is a lot of power but the explosion is only a hyperblink of 10-6 seconds. If you [stretch] the nuclear blast so that it spent its energy over a full second instead of microseconds, its power density would be reduced to only 1011 ergs per second per gram, which is about the intensity of a laptop computer chip. Energywise, a Pentium chip may be better thought of as a very slow nuclear explosion.

So, in a very real way, the modern experiences of playing games, reading books, watching movies, and reading published reviews come at a huge energetic expense because of their Technological dependence. Cylons are capable of driving this experience through technology and energetic expense further than ever, making even ‘Projection’ seem simple. Here’s the Cylon Leader, Cavil, on his dreams for the Technological race.

The experiences of “feeling solar winds” and “smelling dark matter” would require a vast constellation of technology requiring an enormous amount of energy for its production the same way that our seeing x-rays requires much technology and energy.

But maybe we can’t get that far. While Humanity creates Cylons time and time again, so too do they go to war: on Kobol, Caprica and the original Earth. Maybe the war is inevitable and Cylons are the technological-ceiling. The Series’ Finale clearly puts the probleming question to us (the audience) as the Messengers walk about our New York City-

Messenger 1: All of this has happened before.
Messenger 2: But the question remains, ‘does all of this have to happen again?’

1) Humanity could advance to the technological threshold of Cylons and not cross-over, preventing another competitive species and stemming the chances for war. Perhaps we can curb the desires for luxury, convenience and experience that would culturally breed for artificial intelligence/life. However, Techno-Bans don’t last globally- and always at the expense of the non-adoptive culture- and they’re historically being overturned faster and faster.

2) Humanity could begin their relationship with Cylons empathetically and actively work toward co-existence. Both modes of being could somehow nourish the other and societal conflict could be avoided by the regulation of rights and privileges to another experiencing entity. Though it’s hard to imagine any distinct separations maintaining over time just as when isolated societies open and their cultural edges blur.

3) Humanity may be but a phase of existence passing over into Cylons. Just as Humans came to surpass its non-lingual ancestors, so too could Cylon technology surpass the limitations inherent in Human physiology, perception and experience. Cylons – with their immortality and heightened perceptions – may just be a better way of Life.

So, if the Messengers are wondering about what we will do when we converge on synthetic life, then we at least have a helpful culture of caution against Techno-slavery and Artificial Intelligent Uprisings through our books, comics and movies. Blade Runner, The Matrix and I, Robot name only a few of the popular thought experiments meant to give the question of synthetic life and its consequences with Humanity a serious consideration. In each of the movies mentioned, and in Battlestar Galactica, there’s no hint of similar considerations in their culture before their technological uprise – never is Colonel Adama reading about electric sheep.

If Kevin Kelly explains anything it’s that the “ecology of ideas” matters. What we make, what we think, what we do is all influenced by the previous stage-setting developments in organisms, tools, and idea culture. In other words, we may be more prepared for Artificial Life than the Colonials in Battlestar Galactica because we’ve been overthinking Battlestar Galactica.

Nathan Hanks has written lots of Battlestar Galactica posts for us in the past. Check them out! 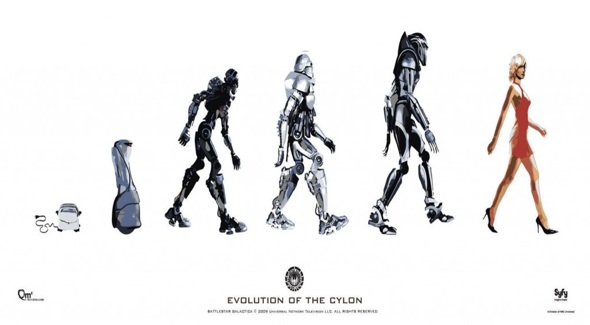 [Do humaniform robots arise out of necessity based on the laws of the universe we inhabit? Are we trapped in a cycle of boots, reboots and preboots until the heat death of the universe? Sound off in the comments! – Ed.]

10 Comments on “What Technology Wants in Battlestar Galactica”