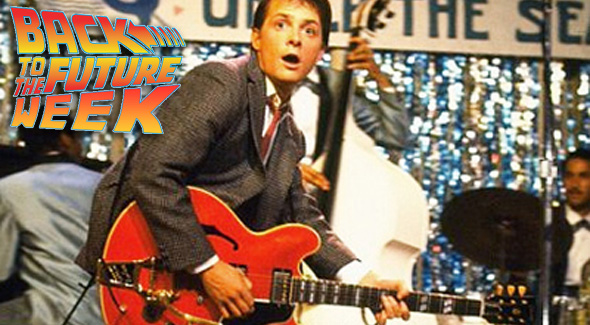 Everyone is familiar with the classic “Johnny B. Goode” scene from Back to the Future and the accompanying controversy: how dare the filmmakers insinuate that a white kid (Calvin Klein/Marty McFly) actually invented rock & roll instead of a black guy (Chuck Berry)? Haven’t white people stolen music from black people enough already?

This sort of knee-jerk reaction completely disregards the evidence on hand. Once and for all, let’s put this myth to bed. Marty McFly did not invent rock ‘n’ roll. He did not give Chuck Berry the song “Johnny B. Goode.”

Notice that when Marvin Berry holds up the receiver to allow Chuck Berry to listen (at around 1:19 in the video), Marty has already played the signature guitar lick and sung all of the lyrics. In fact, Chuck only gets to listen to the last parts of Marty’s performance: the shred metal breakdown.

If Chuck Berry actually took to this “new sound,” what effect would this have had on rock n roll history? See for yourself:

1) The Jonas Brothers should reinvent themselves as an avant garde noise metal band. That would be awesome.

2) Chuck Berry took little to no inspiration from Marty’s performance.

Keeping in mind what Chuck Berry actually heard, we can fill in the gaps on Marvin and Chuck Berry’s phone conversation:

MARVIN: You know that new sound you’re looking for? Well, listen to this!

CHUCK: Marvin, what the hell was that? What’s going on?

MARVIN: Uh, sorry. Let me explain… You see, I cut my hand at that high school dance gig, and we got this white kid to fill in on guitar at the last minute. For the encore, he whipped out this smokin’ jump blues tune, somethin’ about Johnny do good…ah, never mind.

Albeit at the expense of the Jonas Brothers as a noise metal band. A small price to pay for a healthy space-time continuum, I suppose.