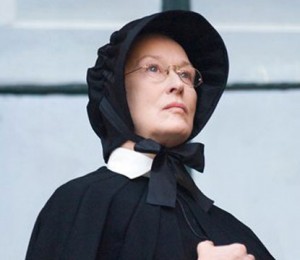 Believe it or not, this is actually a surprise cameo from the new Transformers movie.

After announcing the winners of our Clichemaggedon contest, in which we celebrate both the good and the bad of Summer Movie Season, Belinkie left us with this parting thought:

Gather ye popcorn flicks while ye may, for before you know it we’re going to be neck deep in prestige pictures starring Meryl Streep.

“He’s right,” I thought to myself. “I need to milk this Summer Movie Season and all its gratuitous CGI/3D/sequelness for all it’s worth.”

And then I thought to myself, “Meryl Streep and prestige pictures? We need to quantify this, ideally with some charts and graphs.”

If you’re reading this website, you should get Belinkie’s joke, but in case you don’t, here’s the deal: “prestige pictures” are the serious, artsy films that studios put out at the end of the year to tee them up for Oscar contention.   Meryl Streep has the most Academy Award acting nominations (16) among all actors. Hence the connection between Streep and prestige pictures.

We all know this intuitively, but I thought it would be fun to crunch the numbers to put this in measurable terms. And in the process, I came up with a new way for measuring actors: by their Prestige Factor. In other words, to what degree does an actor’s output trend towards the end of the year as opposed to the spring cleaning of studio crap and the summer tentpole blowing up of studio crap?

By my count, Meryl Streep has starred in 41 movies, from The Deer Hunter in 1978 to It’s Complicated in 2009. I excluded anything she didn’t star in and movies where she only provided voice parts. First, simple question: how do those 41 movies break down by release date? 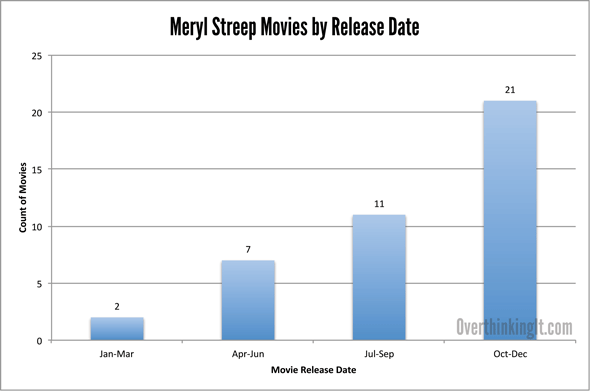 This should be of no surprise. About half (21) of her movies have come out in the October-December quarter. But she does have a large chunk of summer fare as well: 18, if you use the Fast Five “Summer Starts in April” rule of thumb.

So how do we account for this, if this simple breakdown doesn’t tell the whole story? This, my friends, is where the Prestige Factor comes in. The idea is actually pretty simple: for each movie, calculate how late in the year it comes out and put it on a scale of 0-10. A movie that came out on January 1 would be a 0, and movie that came out on December 31–just under the wire for Consideration–would be a perfect 10.

With this scale, we can show how her Prestige Factor changed from year to year (years with multiple movies take the average of all movies): 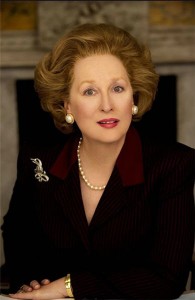 Note: Streep’s next movie is “The Iron Lady,” a Margaret Thatcher biopic. Release date? You guessed it, late 2011.

Here’s how to interpret this: in 2008, Streep starred in 3 movies: Dark Matter (April 11), Mamma Mia! (July 18), and of course, Doubt (December 25), for which she received one of her 16 Oscar nominations. The average of each movie’s Prestige Factor (2.77, 5.45, and 9.84, respectively), gives her a Prestige Factor of 6.02 for that year. Doubt maybe a poster child/whipping boy for prestige pics, but Mamma Mia! is…not so prestigious. Now, compare 2008 to 2002, when both The Hours and Adaptation came out in December, which gives her a mighty 9.6 for that year’s Prestige Factor.

By the way, in case you’re wondering, her Prestige Factor shows no notable trend over time, other than a dip in 1991 that’s the result of Defending Your Life (March 22). Behold, the Prestige Factor line graph: 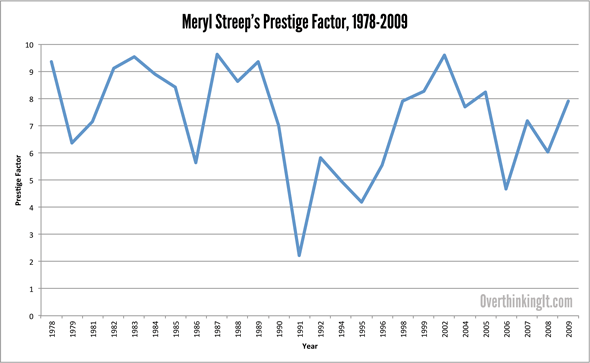 And finally, this leads us to Streep’s overall career Prestige Factor, the average of all of her individual movies’ factors: 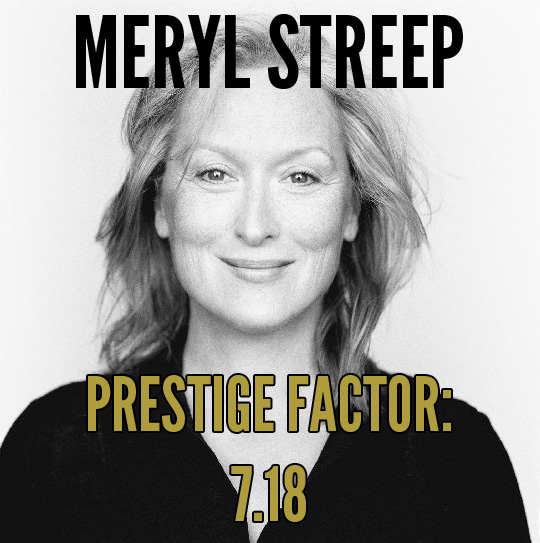 7.18 out of a possible 10! While high, it’s not stratospherically so. Which goes to show us that although it’s easy to associate Streep with late-year art house Oscar bait, there’s a decent amount of She-Devil! and Death Becomes Her to balance things out a bit.

Now, at this point, if you’ve read any of our other articles on statistics, you know that any given data point–in this case, Streep’s Prestige Score of 7.18–isn’t particularly interesting without anything to compare it to.

So with that in mind, ladies and gentlemen, I present for comparative purposes, Mr. Vin Diesel. 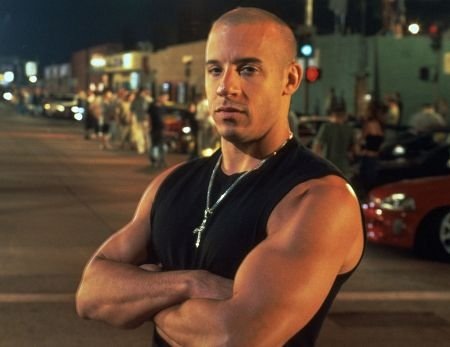 “I have to get knives and fight evil!” – OTI Podcast Episode 85

First, I should say that I don’t make this comparison to disparage Vin Diesel in any way. He’s pretty good at what he does. But let’s put it this way: there is no Oscar for Best Supporting Biceps. Vin Diesel is not thought of as a prestige picture actor in the way that Meryl Streep is. In fact, he’s about as far away from such an actor that you could possibly get while staying within the boundaries of A-list actors.

With that said, let’s see how Diesel’s movies break down by release date. For 13 movies that he’s starred in, from Boiler Room in 2000 to Fast Five in 2011, almost half of them were released in the April-June quarter: 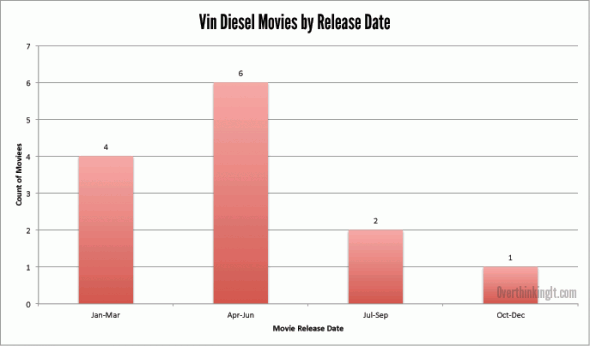 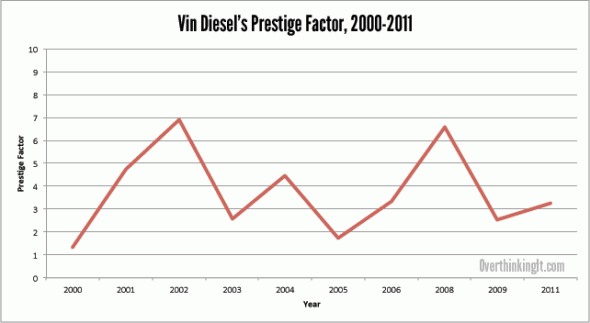 As was the case with Streep, Diesel’s career shows no discernable trend in Prestige Factor from year to year, but that’s pretty much where the similarities end. Yes, it’s obvious that Vin Diesel is not the prestige picture actor that Meryl Streep is, so let’s see what his overall career Prestige Factor is: 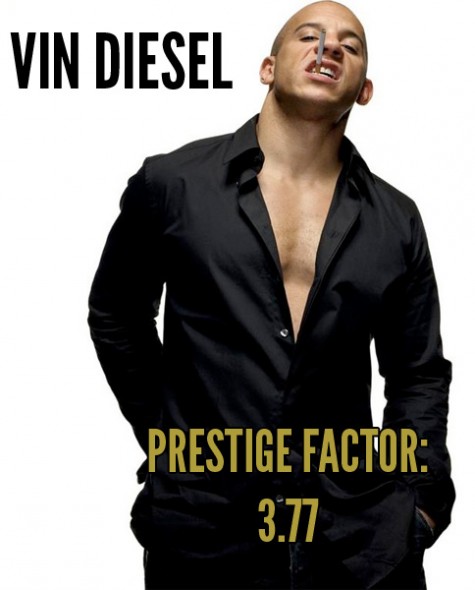 There you have it. Now you know how far Vin Diesel is from Meryl Streep prestige territory: 7.18 versus 3.77. Oh, and Meryl Streep did a Holocaust movie. Get on that, Vin Diesel.

Actually, on second thought, don’t get on that. Stick with the new Riddick movie.

Readers: Join in on the fun! I challenge you to find an actor whose Prestige Factor is either higher than Meryl Streep or lower than Vin Diesel. I’m pretty sure that Streep and Diesel don’t represent the extreme ends of this spectrum. Take this Excel spreadsheet as an example and go to town!

30 Comments on “The Prestige Factor For Actors”