Say what you like about Hitchcock, the dude knew his women! He surrounded himself with some world-class hotties – a fine stable of prime wool for himself, Cary Grant and Jimmy Stewart to pick from. He had game before The Game even had game. 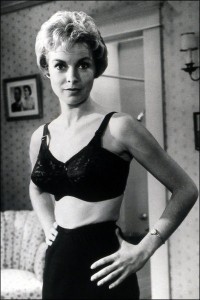 A good girl gone bad, Janet Leigh turned heads in Psycho. Not just good-looking, she knew how to jack that paper, too. Leigh made film history – and erection history – with her infamous shower scene. Word has it that if you freeze frame and look carefully, you can totally spot nips.

4 Comments on “Underthinking It: The Five Hottest Hitchcock Blondes”