Keep on a-rockin’ me, baby.

In TV news, U.S. President Barack Obama is all over the place. Not only did he tape an episode of The Discovery Channel’s Mythbusters, revisiting a myth about Archimedes, but he’ll be appearing on The Daily Show next week as well. What did Presidents do before television helped keep them in the public eye? Wait, were there Presidents before TV? Ought to look that up. 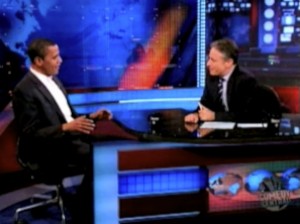 You know I could order your death, right?

Lil’ Wayne, the most divisive subject in the Overthinking It Writers Lounge, released an album two weeks ago that has shot to #1 on the Bilboard charts. This makes Weezy the second MC to have a #1 album while in prison, 2Pac being the first. When reached for comment, Lil’ Wayne mumbled something.

And in video games news, Fallout: New Vegas dropped this week. The new entry by Obsidian continues the direction taken by Bethesda with Fallout 3, providing an FPS/RPG hybrid exploration of a post-apocalyptic future. If you love me, you’ll get me one for Christmas.

And in site news, welcome to the 117,000 new faces we’ve seen in the past two weeks! Shana Mlawski’s Female Character Flowchart has hit every corner of the Internet, and IMDb thought our analysis of their top 250 movies was worth visiting. Please, for the love of Mega Man, give us a little piece of money.

Will Barack Obama venture forth from the desert wastes to contest Lil’ Wayne’s rulership of a post-apocalyptic empire? Or is there something we missed? Sound off in the comments, for this is your … Open Thread.