Of the top 25 TV shows broadcast last week, 7 were on Univision, 1 was the All-Star Game, and 11 were reality shows.  Only six English-language scripted shows made the list.  For good or ill, reality is taking over.

Compare that to OverthinkingIt.com, where a search for “reality” turns up over 179 articles, including a lot of Lost, Back to the Future and Total Recall commentary.  Meanwhile, searches for “reality TV” and “reality show” turn up fewer results, most of them in the comments section or on an open thread.  A couple of years ago, frequent commenter Gab asked “does anybody watch any reality TV, or is that… below… the Overthinkingit uh, cast?”

Only CSI will survive...

We’re not above reality TV (or much of anything, really), but that side of popular culture can be difficult to Overthink.   While we can examine the characters, the production and the terrors that these shows presage for our society, this site tends to deal with broader themes. 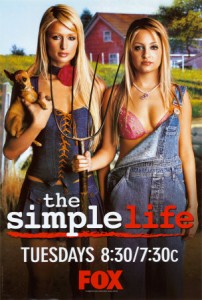 Guess which theme this one is?

Hard to overthink those few basic themes, but for this Underthought juggernaut of the popular culture, it’s worth a shot.   I plan to spend the next few posts taking a look at reality shows and trying to dig a little deeper.

First, I want to take a look at Food Network and the food shows on Bravo.   Having been subjected to countless hours of these shows in recent weeks, one thing has become clear: the producers of the Food Network are pornographers.

Pornography’s attempts to stimulate its audience are handicapped, seeking to approximate the full-on sexual experience with only two of the five senses.   In order to make up for the fact that you can’t touch, taste or smell the folks getting it on for you, porn has to provide additional stimuli.   Though lots of fun for those involved using all five senses, watching and listening two normally sized Americans have basic Wednesday night missionary sex in a bed just isn’t doing it for us anymore.   First, they started hiring insanely beautiful women.  Then those women started getting surgically altered to look like Jessica Rabbit.  Now there are whole websites dedicated to tying up midgets in public settings—you’ll have to google that yourself. The unusual makes up for the handicaps of the medium. 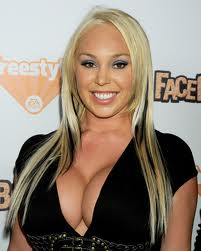 "They said that if I didn't pose in those pictures, Roger would never work in this town again!"

Food shows are forced to do the same thing.

A television network devoted to food is like an art appreciation class for the blind – the key elements of the discussion just aren’t going to come through.  Imagine the investor meeting for the Food Network.   A journalist from the Providence Journal in Rhode Island goes into the offices of Scripps Networks Interactive (true) and says: “We’re going to do an entire channel about food.”   The Scripps executive says: “But food is all about taste, smell and texture and we haven’t even perfected smell-o-vision.”  The journalist then pulls out his extensive blackmail file on the executive and the rest is history.

If the network primarily hosted shows on HOW to cook, it would make sense.  That sort of information can be transmitted through audiovisual means.  Instead of pornographers, the Food Network producers would be the culinary equivalent of the folks who made the filmstrips you slept through in middle school.

But that’s not what the network does.   Some of their programs focus on interesting food from exotic locations, sort of a Lifestyles of the Rich and Famous “you’ll never get to eat this, you plebian” gastronomic tease.   The majority of food shows, however, focus on competition between chefs.  This is where it gets pornographic. 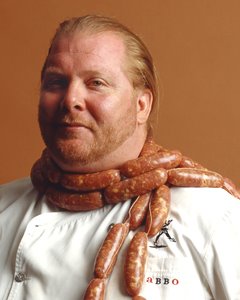 ...and this is where it gets kinky.

The basic setup of every food-related competition show is this:

A number of cooks will be given a limited amount of time and a specific theme and/or ingredient.

The cooks run around a lot and cut up lots of things.  This is interspersed by interviews in which each cook gets to gripe about the limitations of the special ingredient, take shots at their competitors, or talk about their boundless confidence/crippling lack thereof.

The food is presented to the judges.  They eat, then critique the meal in front of them using words that sound really impressive to the uninitiated (favorite recent example: “acidity”).  Whenever something bad is said about a dish, on any show, the same ominous bass drum sound effect moves us on to the next contestant.

One of the contestants is eliminated.  Rinse.  Repeat. We’ve just spent an hour watching people make food that we’ll never get to eat.

Like their friends Hugh Hefner, Larry Flint and that douchebag from Girls Gone Wild, the Food Network producers have figured out what they can give us that will make up for the fact that we derive no actual satisfaction from what they have to offer. 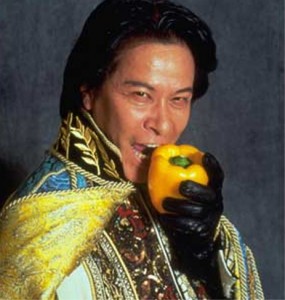 "Don't you wish that YOU could taste this delicious pepper?"

I spent a few months in a restaurant kitchen and have had sex once or twice.  I’ve never witnessed a chef presented with rattlesnake meat or forced to prepare a desert with marshmallows, risotto and bamboo chutes.  I’ve also never had a woman beg me for a facial.  These things do not, and should not, actually happen.

What they do is make up for the fact that neither the enormous fake boobs nor the braised scallops in a reduction of blueberries and pine nuts are actually going in your mouth.

Thanks to my girlfriend, I am fairly familiar with Top Chef, Say Yes to the Dress, Chopped, Clean House, Ace of Cakes and Cupcake Wars.  Thanks to being alive, I am familiar with Big Brother, Real World, Top Model, American Idol, So you Think You Can Dance and the biggest new hit: Wipeout.  Thanks to Belinkie, I knew Iron Chef before it came to the states (and saw God of Cookery ten years ago, before anyone in the US knew who Stephen Chow was).  Beyond that, I’m a novice, so I’m calling on our commenters to suggest new reality shows to Overthink.

Next time: “From Jim Carrey to Snooki: the false promise of the Truman Show.”