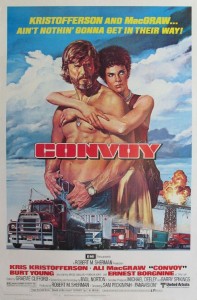 I own a copy of this poster, framed, and signed by Kirs Kristofferson, Ernest Borgnine, and C.W. McCall. I am very proud of this.

On my bookshelf, there’s an old VHS tape with a faded, hand-written label. It says, “Convoy, 1st Gen.” This is because in 2000, when I tracked down and rented a copy of the 1978 Sam Peckinpah movie, after years of searching, I was so excited that I made two copies of it. Then I made another six copies off of those two copies, and gave them away to friends. (I am blessed with the sort of friends for whom a bootleg copy of Convoy is a great gift.) Anyway, the “1st Gen” on the copy I’m looking at indicates that this one was dubbed right from the original. I’ve lugged it from apartment to apartment over the last ten years, even though I haven’t always had access to a VCR.

But I probably won’t ever watch it again. If I wanted to see Convoy now (and I kind of do, after writing the last paragraph), I could just put it on the top of my Netflix queue. They’d send me a nice new DVD that would look ten times better than my old videotape. Actually, I don’t even have to wait for the DVD. Convoy is currently a “Watch It Now” movie on Netflix, so I can stream it right to my computer. Or I can use my XBox to watch it on my TV. And if I wanted to buy it, the DVD is $13 via Amazon.

This is simultaneously awesome, and a teeny bit sad.

It’s easy to forget that only 15 years ago, finding a movie was a very different experience.

Here were your options:

And that’s it. I know this seems unthinkable to those of you under 20, but as recently as the late 90s you only had access to the movies you could drive and pick up. In those dark days, a well-stocked video store was a geek’s best friend. I will always have a deep fondness for Best Video, located in Hamden, CT. At Best Video, you stand little chance of finding anything without one of the clerks to help you. For instance, the Comedy section is divided into “Comedy” and “Best Comedy.” But there are also comedies in “Best of the Best,” and certain directors have their own shelves. I preferred to wander aimlessly, discovering movies I had never heard of but couldn’t wait to see. There were days when I’d rent ten tapes, watch five of them, and dub the other five to watch later. I was a kid in a candy store.

My favorite find there was a horror movie from the Philippines, called The Killing of Satan. The cover asked one of my favorite questions of all time: “What power should a man possess to challenge the Prince of Darkness?” It’s the word “should” that really makes it work for me. 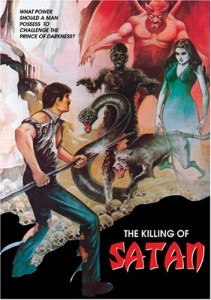 Back in its heyday, Best Video would rent movies by mail as well. You could literally have them mail you a single VHS tape, which you’d watch and mail back in a week. Geeks all over the country happily took advantage of this. In the days when watching anything more bandwidth-intensive than the Hampster Dance seemed impossible, Best Video was the only way to see some of these rare imports and limited editions. The video store is still around, but they’ve shut down the mail order rental business. Between eBay, Amazon, iTunes, Netflix, and BitTorrent, almost anything ever made can be yours to watch, in days if not instantly, at little cost. For instance, The Killing of Satan can be had for under $10.

Once again, let me make it clear that this is a good thing. I love movies, and I love having them at my fingertips. But something has been lost. Part of being a movie geek is priding yourself on seeing the obscure stuff that lesser geeks and mere mortals don’t bother with. This used to be challenging. Today, a movie can have cult status because only a small group of people like it… but not because only a small group of people have access. Finding the movies is never a challenge (finding the time to watch them is another story).

But what I really miss is the sense of community. Back in the day, the best way to expand your movie-going horizons was to find friends with the same passion, and borrow, trade, and share each other’s collections. There’s even an episode of The Simpsons where Bart and Milhouse discover Comic Book Guy’s secret room of bootleg videotapes, and make serious money by charging admission to screenings. I have totally been to parties like that. The episode aired in 2001. Less than five years later, it was completely obsolete. Nowadays, Comic Book Guy’s random clips wouldn’t be on VHS tapes–they’d be all over YouTube. And the people of Springfield would watch them at home, alone.

In 1999, I got a copy of Peter Jackson’s Meet the Feebles off of eBay. This is a spoof of the Muppets that he made at the tender age of 28. An early scene features a puppet cat performing oral sex on a puppet walrus. The whole thing is very funny and strange and wonderful. When it arrived in the mail, I watched it with 20 people, and again the next week with 20 other people. Now, you can see the whole thing on YouTube:

Cartoon All-Stars To The Rescue is a half-hour special produced in 1993, in which a dream team of Saturday morning cartoon characters join forces to help a teen give up drugs. My favorite part is when Alf threatens to eat Garfield. When I got a copy of that one, I had to reserve my dorm’s common room for a giant screening. Once again, it’s on YouTube now:

And then there’s the Star Wars Holiday Special. This was George Lucas’ fantastically ill-advised 1978 variety show, in which Harrison Ford tries to get Chewbacca home to his family in time for “Life Day.” The most jaw-dropping of many painful moments is probably Bea Arthur, singing a song in the Mos Eisley cantina. The Special was aired exactly once, and (unsurprisingly) never released on VHS. For years, it was a kind of geek legend. No one I knew had ever seen it, but everyone had heard stories from friends of friends. “One day,” us young geeks told each other, “we will get our hands on a copy of that!”

This all applies to more than movies. When I was a kid, my brother was a giant Phish fan. And any real Phish fan knows their commercial CDs aren’t where the special sauce is–you need to listen to live performances, where they could spend 45 minutes playing one song. 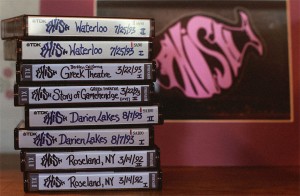 Because you can never have too many versions of Golgi Apparatus.

So Danny would hit up the tape trading websites. While he was doing his homework, he’d be running off dubs of his collection, to exchange with fellow Phishermen. And when a new tape arrived in the mail, he’d put aside whatever he was doing, run into his room, and emerge two hours later humming meandering guitar riffs to himself. He even had a special rack for storing his carefully organized Phish bootlegs.

Nowadays, you can get all your concert recordings online, no communication with other human beings required. TapeTrading.com is actually for sale. I doubt anyone will buy it.

Overnight, we’ve come to expect any movie ever made to be available at the click of a button, and we usually get our wish. It’s an amazing embarrassment of riches. But when entertainment flows as freely as water from a faucet, we start to take it for granted. We don’t get the pleasure of seeking it out, and we don’t bother sharing it with friends. Part of the fun of watching obscure movies used to be the thrill of finding something rare… but in the Internet Age, no movie is rare. And like I said before, that’s a good thing that makes me a little sad.

[Update: We took up the question of what makes a movie a “cult” movie on a recent episode of the Overthinking It Podcast [iTunes link]. Download Episode 89: Wang-Free Zone. —Ed.]

61 Comments on “The End of Cult Movies?”