No critic can overstate the impact of George Lucas’ Star Wars trilogy. Appearing at a time when sci-fi films were largely low-budget, post-apocalyptic downers (THX 1138, Logan’s Run, A Boy and his Dog), they injected a new hope into the genre’s blood. The effects which Industrial Light and Magic pioneered set the stage for modern CGI; indeed, the battle scenes in the original trilogy stand up to the test of time. And the sense of wonder that the setting evoked inspired a generation of storytellers.

With this to live up to, there were as many people holding their breath for the prequel trilogy as were chomping at the bit. Thankfully, 1999’s Star Wars: Episode I: The Seven Warriors shattered everyone’s expectations.

After the habitual title crawl, The Seven Warriors begins with a long, low horizon shot of the desert town of Anchorhead on Tattooine. A massive vehicle on armored treads rolls in from behind the camera, filling the screen in a manner reminiscent of the Star Destroyer in A New Hope. J. Hoberman also pointed out the evocation of the icy wastes of Hoth in The Empire Strikes Back – a clever merger of two Lucas classics that doesn’t seem derivative (see “Definitely The Droids We’re Looking For”, Village Voice, May 18 1999). 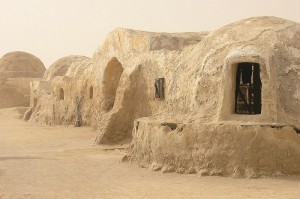 The villagers of Anchorhead are menaced by a squad of Gammorrean slavers. One of them has his rifle raised to gun down a fleeing boy when another taps him on the shoulder. A robed figure approaches the village from the whistling sands of the desert: hooded, hands behind its back, featureless. Where did it come from?

Still it approaches, soundless. Only when the figure gets within a few paces does the Gammorrean raise its blaster to threaten it. Then it raises a hand and gestures, and the Gammorrean lowers its weapon, confused. “The entire build-up here is a testament to Lucas’s growth as a director,” noted Bruce Westbrook. “We didn’t see Lucas really stretch out tension like this until Return of the Jedi, and then never so well.” (see “The Lone and Level Sands”, Houston Chronicle, May 16 1999)

The other Gammorreans surround the figure. Only now, outnumbered, does it raise its head slightly and speak.

OBI-WAN KENOBI: I’ve come to discuss surrender.
(The Gammorreans laugh, squealing and snorting)
GAMMORREAN: That’s the idea. Let’s hear it.
OBI-WAN KENOBI: Drop your weapons, mount your vehicle, and place yourself at the disposal of these villagers. Otherwise you may get hurt.
(The Gammorreans stop laughing abruptly, either confused or angry)
GAMMORREAN: We give the threats here, human! The Tekkari Syndicate surrenders to no one! We come and go as we please!
OBI-WAN KENOBI: No, I’m afraid it’s too late for that.

As one, the Gammorreans raise their rifles. The hiss-crack of a lightsaber emerges from the robes. And the moment we’ve been waiting twenty-seven years for begins.

One thing worth noting before the analysis continues. Though most critics picked up the parallels between The Seven Warriors and The Seven Samurai without much prompting, only a few saw the connection to the rest of Kurosawa’s work. Janet Maslin called the opening fight scene, where a young Kenobi fights off a dozen Gammorreans and Padme Amidala leads the villagers in a charge against the armored vehicles, “reminiscent of Yojimbo in its austere violence.” (See “In The Beginning Was The Future”, New York Times, May 19 1999). Though not as hectic as many of Lucas’s earlier action scenes, it still provides a healthy dose of thrills to start the story. 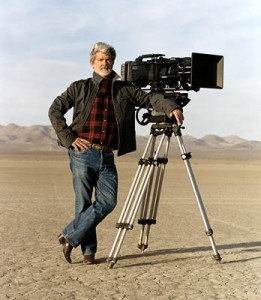 This also speaks to the tremendous misdirection which LucasFilms used to mislead savvy Internet fans. Early reports on AintItCoolNews suggested that the first ten minutes of Episode I contained a stilted ambush against two Jedi by a pair of incompetent mercantilists. The fact that these obviously fake “leaks” gave Episode I a much goofier name should have been a giveaway, but Harry Knowles was never known for cool consideration. The loss of credibility that AICN suffered when the real film debuted shattered the burgeoning site’s reputation; Knowles’s later arrest for child pornography went largely unmourned).

25 Comments on “Star Wars Episode I: The Seven Warriors”