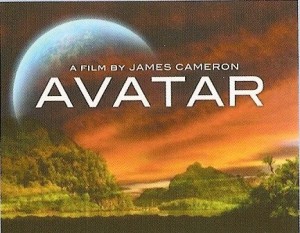 So I finally saw Avatar, everyone.  Yeah, I know, I’m late.  I didn’t hate it as much as I thought I would, but I didn’t love it, either.  The story had problems, and I didn’t find myself connecting with any of the characters.  The animation was cool, but not cool enough to justify the boring plot and characters.  Also, the movie was long.  Real long.

But I did quite enjoy one thing about the film, and that thing was the world building.  Okay, the Na’vi species isn’t all that different from the human species, and, sure, the Na’vi culture isn’t all that different from white Americans’ common misinterpretations and mental mishmashing of every native culture our grubby pale hands have ever come in contact with.  But overall I thought the Na’vi were kinda neat.  I liked the idea that they could literally connect with nature via a neural net, I liked that they could tame animals this way, and I liked that this all influenced the development of their culture.  I also liked the general badassness of the Na’vi, whose pedagogy seemed to boil down to, “Learn this fast or die in the most painful way possible.”  Probably wouldn’t work for us squishy humans, but Na’vi bodies take a beating better than ours do—they can handle it.

My quick review of Avatar, then, is, “Bland plot, bland characters, pretty animation but not so pretty that I’m going to start cursing God for giving James Cameron such powers… but it had its moments.  And those moments involved the world building.”

Color me surprised, then, that the ever popular Jason Kottke had almost the exact opposite reaction.  To him, Avatar’s story, characters, and visuals were top-notch; the world building, on the other hand, was piss-poor and nonsensical.  According to his review, the Na’vi shouldn’t be living in  Stone Age conditions because

And he concludes: “The Na’vi are too capable and live in an environment that is far too pregnant with technological possibility to be stuck in the Stone Age. Plot-wise it’s convenient for them to be the way they are, but the Na’vi really should have been more technologically advanced than the Earthlings, not only capable of easily repelling any attack from Captain Ironpants but able to keep the mining company from landing on the moon in the first place.”

My response is thus:

Nope.  Nope nope nope.  Wrong on almost every count.  And here’s why.

Premise 1: The Na’vi Are Smart And Strong

Let’s start at the beginning.  Rather than refute each sub-argument point by point, I’m going to combine the first four premises of Mr. Kottke’s thesis into one big point: “In their intelligence and resourcefulness, the Na’vi are like humans.”

And I agree with this premise, for the most part.  In almost every important physical way (let’s put off discussion of their neural ponytails for the time being), the Na’vi species is humanlike.  We can expect, therefore, that they will develop in an anthropologically similar way.  (This is a big assumption, I know, but you have to make some assumptions in a case like this.  It’s not like I can go to Pandora and study these people for generations like Sigourney Weaver’s character.)

The problem here isn’t the premise that the Na’vi are as smart and physically-capable as humans but the conclusions that follow this premise.  Mr. Kottke seems to be assuming that intelligent, physically-capable people would naturally explode with technology.  This argument bothers me quite a bit because of its unspoken flipside: that any culture existing at a Stone Age level must be UNintelligent, UNhealthy, and weak.  I don’t want to call anyone out on being a racist here, but, dude, that’s a little racist.  I know you didn’t mean to be racist, but, dude.

Anyway, the notion that any smart and physically-capable civilization will break out of the Stone Age is just not true.  Take the Taíno Indians, for example.  (You know, the folks Mr. Columbus and co. stumbled upon when they accidentally crashed into the Caribbean in that helpfully rhyme-able year of 1492?  Them.)  As far as we can tell from our limited sources, the Taíno who lived back in the 15th century were in many ways similar to the Na’vi.  They most certainly lived in Stone Age conditions.  They didn’t wear much in terms of clothing; they didn’t have a real written language; their weapons were made of rock and wood and bone.

Oh, and the Spanish killed them.  Not all of them, but, like, 99.9% of them.  Guess they must have been really stupid, then.  Really stupid or really weak or really… something.

But that’s not what Columbus said.  Read his logs from his first voyage and you’ll see that he was in awe of how strong and tall (read: healthy) the Taíno really were.  He also constantly mentioned their obvious intelligence and curiosity.  (These traits were of interest to him, by the way, because it meant that the Spanish could probably convert them to Christianity easily.  You can’t do that with true “barbarians.”) 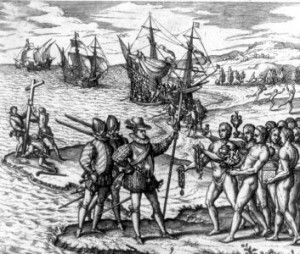 The 15th century version of Avatar.

Now, you may argue, “Well, maybe the Taíno weren’t actually strong or healthy or smart; maybe Columbus was just making shit up so he could sell these people as slaves.”  Maybe.  But the fact is, when Columbus got home to Spain with a small group of Taíno he kidnapped, everyone else in Europe was impressed with their strength, health, and intelligence, too—impressed enough to want to buy them as slaves.

“Okay, okay!” you may argue.  “But if the Taíno really were that smart and healthy and physically-capable, why didn’t they try to fight off their Spanish conquerers?”  Well, actually, they did, and, trust me, they f-ed some shit up.  This is from a culture that, if Spanish records are of any use, described themselves as a peace-loving people.  And they did some damage.  You may not recall from your elementary school history class, but Columbus was forced by circumstance (read: Dumbass crashed a ship) to leave a whole boatload of armed Spanish sailors in a fort on Hispaniola, and one clan of Taíno ended up killing all of them.  Stone Age weapons 1, Renaissance weapons 0.

Unfortunately for the Taíno, there was a little thing called “disease” back then, which thinned their numbers to the point of no return.  (They got their revenge, though, in a way.  The Taíno got smallpox or whatever from the white man; in return, the white man became familiar with a little disease known as syphilis.)

The Taíno wasn’t the only human culture full of smart, physically-capable people who lived in the Stone Age.  You may also recall that several groups of smart, physically capable white Europeans lived in the Stone Age, too, for, oh, about two and a half MILLION years.  Long story short: Intelligence and strength alone do not instantly lead to technological advancement.