Premise 4: The Na’vi Can Travel and Live in Different Environments

It’s true.  Like humans, the Na’vi can travel fairly long distances and live in wildly different environments.  But travel alone doesn’t lead to technological advances.  It only does that if A) the culture you’re traveling to is more technologically-advanced than yours, B) that other culture wants to share that technology with you, C) you can use that technology in your homeland, and D) you want or need to use that technology back home.

Again, let’s look at the Taíno.  They weren’t trapped on tiny islands in the Caribbean.  They had boats, and they traveled all over the place.  But the question is, where could they travel to get more advanced technology?  The other islands in the Caribbean were still operating in the Stone Age, as were the tribes in Northern South America.  Maybe the Taíno could have gotten better technology from the Aztecs, but the Aztec technology wasn’t much more advanced, and I somewhat doubt the warlike Aztecs would have wanted to share it.

It seems to me that this is why Avatar’s Omaticaya aren’t all that technologically-advanced, either.  They can visit other Na’vi clans, but what technology can they get from them?  Not much, I’d guess.  Moreover, the end of the film suggested that the Na’vi clans get along fairly well, which means that they wouldn’t need to constantly develop new weapons technology to use in wars.  Until the Sky People showed up, the Omaticaya were doing quite all right in terms of weapons.  The other clans were under control, their natural predators were under control, and they knew how to live in their environment in a sustainable way.  Why would they need to develop new weapons? 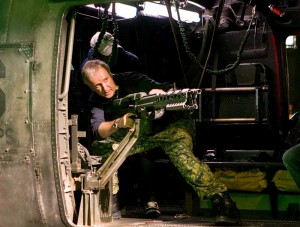 James Cameron, on the other hand, needs to use the most advanced weaponry available to him, even if it is completely unnecessary.

Premise 5: But for God’s Sake, Woman: The Na’vi Have a Supercomputer!

This argument suggests to me that Mr. Kottke believes that all possible computers would naturally be like Earth’s current computers.  Our computers, which are made by humans, store information about how to make technology and other types of “progress.”  We’d naturally assume that the Na’vi supercomputer would be similar.

But why assume that at all?  First of all, the Na’vi supercomputer is clearly not a human computer.  We make our computers in our image; the Na’vi didn’t make their computer at all.  The neural network in and under their trees might have been there before Na’vi ever existed.  It’s likely that the Na’vi evolved to connect to that network, rather than the other way around.

Even if the Na’vi had made the supercomputer themselves, they would have made that supercomputer to store the information they found valuable.  You can see this in any scene that features Jake or Neytiri connecting to the Pandora-net.  In the Tree of Voices, Jake doesn’t learn from the ancestors how to build a functioning abacus or how to destroy an enemy culture with a nuclear-powered death ray.  It seems that Pandora-net doesn’t store technological blueprints but important cultural information: advice, stories, myths, information on how to live.  Pandora-net is less a Wikipedia and more a Soul-a-pedia.