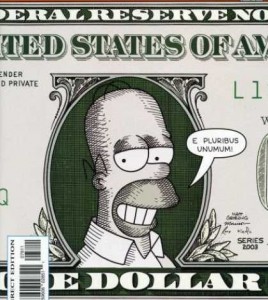 [Special thanks to Stokes for coming up with the concept for this D’OHverthinking It post. – Lee]

It’s often said that the Simpsons are intended to be an iconic representation of typical lower-middle class Americans. The father works a semi-skilled blue collar job, and they own a home and two cars, but they’re always a little short on money, and their financial problems have often been used as major and minor plot points in the series.

But “The Simpsons” is an episodic TV show–that is, plot elements typically don’t carry over into future episodes. Granted, there are some exceptions (the death of Maude Flanders being a notable one), but for the most part, problems that arise in one episode are resolved in that episode, and that’s that.

The same holds true for the Simpsons’ financial problems. Someone in the family (usually Homer, but often Marge) makes an unsound financial decision, pays the consequences of that decision for the duration of the episode, and is finally saved from that situation through implausible but humorous plot devices. Problem solved. Subsequent episodes may mention other specific or general financial difficulties, but never the lasting ramifications of past mistakes or hardships.

Sounds familiar? Like how for the last twenty years, consumers and individuals kept borrowing money to solve problems until the credit stopped flowing?

You may be asking yourself: “Surely you can’t be serious in suggesting that the Simpsons’ episodic and ephemeral fiduciary actions actually influenced American consumer behavior to the point of causing systemic collapse.” But consider the complex relationship between a piece of art like “The Simpsons” and the real world its audience inhabits. A show like “The Simpsons” both satirizes and sanitizes the poor fiscal habits of irresponsible middle class Americans. Those same middle-class Americans who comprise the show’s audience are attracted to the show, partly for this reason. They grow more and more accustomed to this sort of behavior, and worst of all, its lack of real consequences.

In small yet significant ways, this changes real-life attitudes, which changes real life behaviors. The show turns back to its audience for the source of its satire. The cycle not only repeats itself, it amplifies itself with each iteration. Think I’m overstating the impact of television on our culture? Look no further than this show’s impact on our language and try to tell me that TV doesn’t affect us in significant ways.

Twenty years of “The Simpsons” has led America down the path of high spending, massive debt, and anemic saving without any sense of real consequence.

I say this partly in jest. But take a look at these economic trends over the last twenty years “The Simpsons” has been on the air:

When did America’s household income-to-debt ratio start to fall off the cliff? Almost twenty years ago: 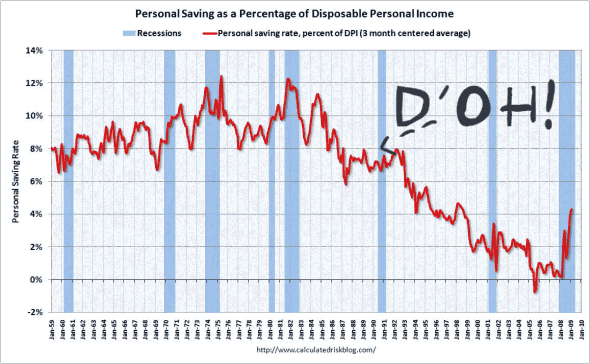 When did America’s trade deficit (current-account balance) start to fall through the floor? Almost twenty years ago: 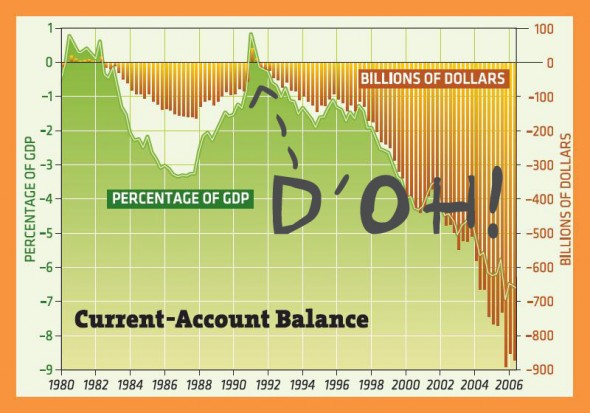 Yeah, yeah, correlation does not equal causation, I know. But even if you discard the causal link between “The Simpsons” and the economy (I wouldn’t blame you if you did), it’s hard to ignore the eery parallels between the rise in popularity of this show and the consumer behavior depicted within and the sea changes in our economy over the same time.

And if you’re still not convinced, well, see what was at the nexus of systemic risk in our financial system right before the crash: 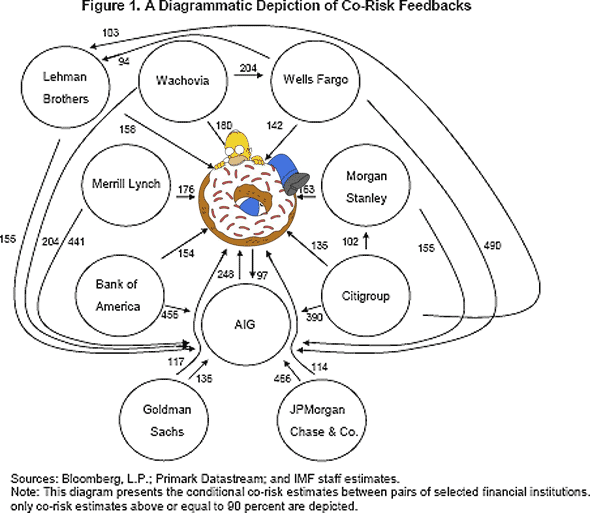 12 Comments on “Simpsonomics: Did Homer Help Cause the Financial Crisis?”